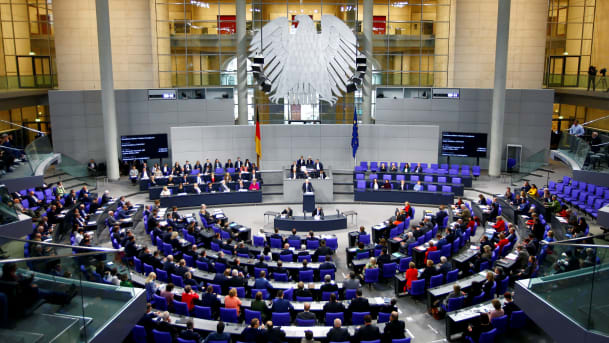 The decision by the German parliament to condemn the boycott, divestment and sanctions (BDS) movement against Israel and to define it as anti-Semitic is a diplomatic achievement for those who deny the occupation and refuse negotiations, chief among them Prime Minister Benjamin Netanyahu. The strategic investment in public diplomacy [JB emphasis] and nurturing German guilt for the Holocaust paid off; this is the first time that a major European parliament has declared the BDS movement anti-Semitic. Naturally, Strategic Affairs Minister Gilad Erdan, whose ministry led the battle against the BDS movement, also welcomed the Bundestag’s decision along with Netanyahu. Netanyahu said that he “hopes that this decision will lead to concrete steps, and I call on other countries to adopt similar legislation.” But this is a decision that denies reality and suppresses a nonviolent channel of opposition to the occupation.The Bundestag members were apparently persuaded that the methods used by the BDS movements are anti-Semitic. For example, stickers that call on consumers not to buy Israeli products generated associations with the Nazi slogan, “Don’t buy from Jews.” Calls to boycott Israel as part of the struggle against the occupation have now been forbidden in Germany because they recall calls to boycott Jewish businesses in Nazi Germany. But the effort to blur the difference between anti-Semitism and opposition to Israeli policy gives legitimacy to extremist anti-Semitic leaders who happen to support Israeli policies. Israel’s diplomatic tricks have once again shown that the Netanyahu government views Israel’s control over the Palestinians as a mere public diplomacy problem, rather than a moral and legal injustice that has been going on for decades with no real attempt to stop it. But even another hundred decisions by other countries to silence critics of Israel will not hide the bitter truth: Israel is using military power to control millions of Palestinians who lack citizenship and are being denied civil rights.But diplomatic “achievements” like the Bundestag decision are not just a distraction from Israel’s real problems that the Netanyahu government continues to ignore. They also remove a nonviolent Palestinian method of protest, and as a result are likely to cause damage to the future relations between the two peoples and to the security of Israeli citizens. Even those who are not convinced of the purity of the political motivations of the BDS movement must understand that the delegitimization of nonviolent Palestinian protest pushes the Palestinians, who are fighting for their national liberation, toward violence.Netanyahu and his supporters in Israel and abroad believe that the protest against Israel and the occupation will end or weaken as a result of such laws or regulations. They are mistaken. To stop the protest against the occupation one must stop the occupation, or at least demonstrate a genuine, serious desire to do so.The above article is Haaretz’s lead editorial, as published in the Hebrew and English newspapers in Israel.
Original Article