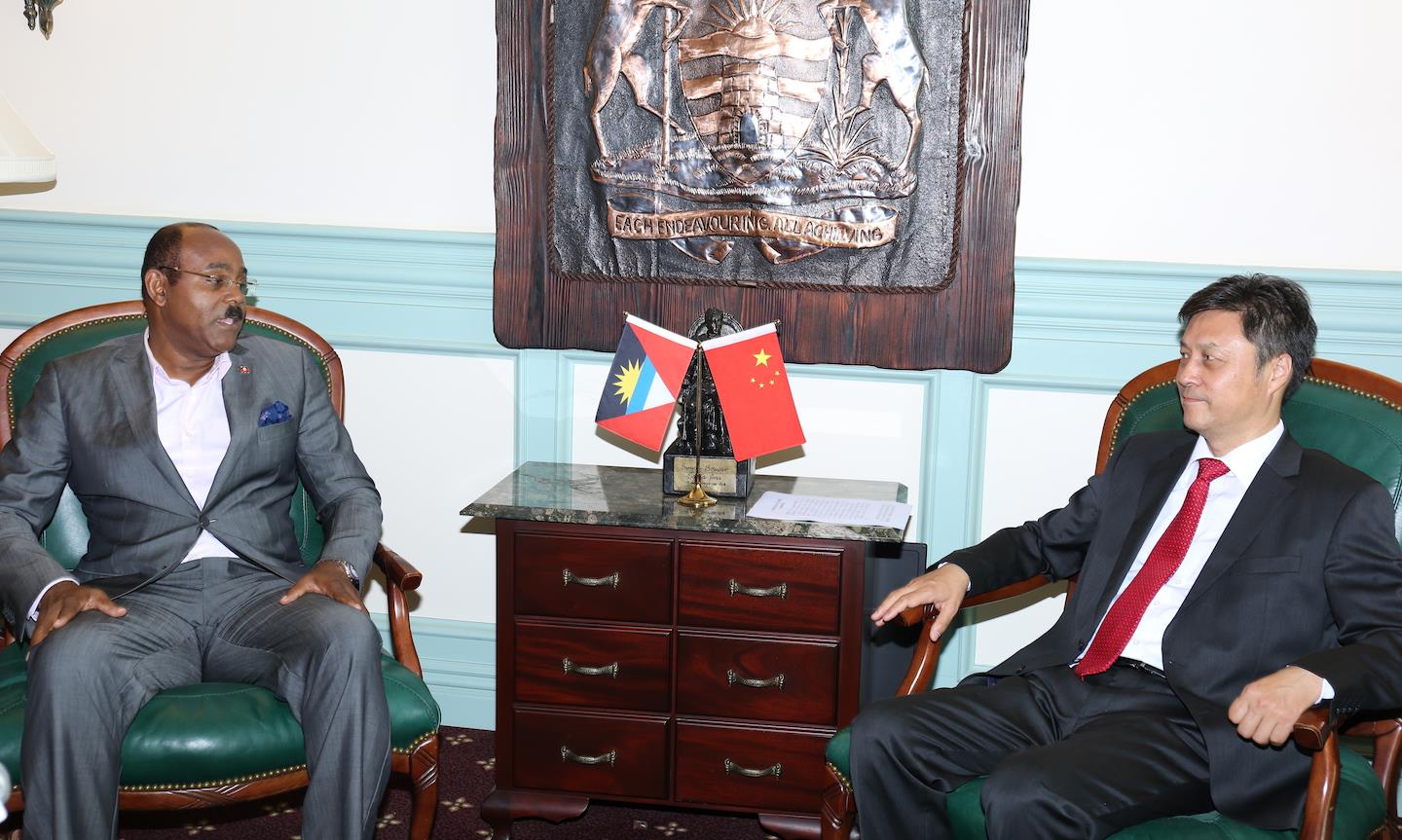 uncaptioned image from article
(MENAFN – Caribbean News Now) St. Johns, Antigua Prime Minister of Antigua and Barbuda, Gaston Browne welcomed Sun Ang, the newly appointed ambassador of the People’s Republic of China to Antigua and Barbuda, and praised the excellent relationship that has developed between the two countries over the past 36 years.
China has been very benevolent to the government and people of Antigua and Barbuda and has contributed significantly to the social and economic development of our country. The relationship is very important to us, in fact, it is easily one of the most important developmental partnership, Browne stated.
I am very happy that two countries located in two different hemispheres, two countries that have a significant number of asymmetries in terms of size of population and financial resources, could have such a close and fruitful relationship. I believe this is based on the relationship we have cultivated over the years and the mutual trust and respect that we have shown for each, he said.
Browne also noted that he is certain that Ang will follow in the footsteps of his predecessors in continuing to strengthen the bonds of friendship between Antigua and Barbuda and the People Republic of China.
Ang, in responding to Browne outlined that China places great importance to the relationship between the two countries. We think that no matter the size of each country, we respect each country as a member of the international community, he said.
In recent years, under your leadership, our countries have maintained the momentum of developing the relations further. China appreciates the positions that you and your government have taken in support of the policies of China, including China’s calls for peaceful resolution to conflicts. The construction of our Embassy here in Antigua and Barbuda is a reflection of our good relations. It is also a foundation for our future cooperation, Ang said.
Ang also announced that as a sign of the development of the relationship, the Chinese government will sign an agreement with the government of Antigua and Barbuda for the waiver of the visa requirement for holders of diplomatic and official passports.
In a quest to promote capacity building and cultural exchanges, the government of the People’s Republic of China has joined with the Antigua and Barbuda government in offering over 100 programmes for Antiguans and Barbudans to pursue Masters and Doctoral studies in English in universities in the People’s Republic of China.
The programme is handled by the prime minister’s scholarship programme in collaboration with the ministry of foreign affairs and is opened to all qualified Antiguans and Barbudans and covers tuition fees, living expenses and international travel expenses along with a stipend.
The prime minister’s scholarship committee announced that the scholarships are being offered in two categories: special planned programme which is offered by the Chinese Scholarship Council and offers programmes from 26 universities to include Peking University, Renmin University of China, Beijing Jiao Tong University, Fudan University and Tongji University. Deadline for this programme is May 31.
Some of the programmes offered include Finance, Architecture, Urban and Rural Planning Studies, Civil Engineering, Hydraulic Engineering, Pure Mathematics, Chemical Engineering and Technology and e-Government.
The second initiative is offered under a direct enrolment system, whereby 38 programmes are being offered from 33 universities. This programme which has an application deadline of July 12, offers Masters and Doctoral degrees in a number of disciplines to include Education, Public Diplomacy [JB emphasis], Tourism and Hotel Management, Public Health, Mechanical Engineering and Meteorology.
The Chinese ambassador, in pledging to continue to develop the relations between the two countries, also commended Browne for being a good friend of China and for his continued defense of complementarity and respect for each country’s right to chart its own development.
Your stance is appreciated by the Chinese government and people, prime minister, he said.
Original Article