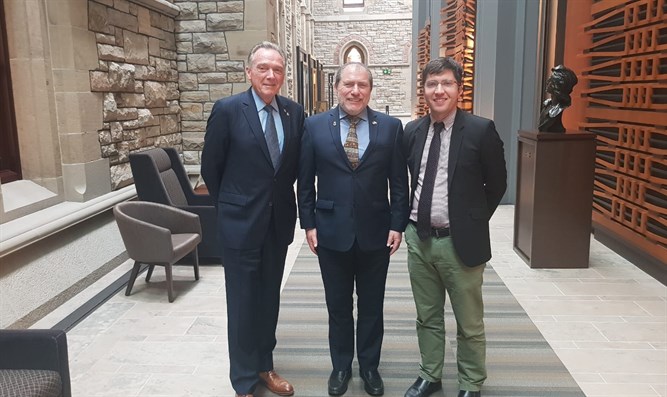 Chaim Silberstein with Canadian Parliament Members
Courtesy
Chaim Silberstein, founder and president of the public diplomacy [JB emphasis] organization Keep Jerusalem, paid a visit to Canada last week, culminating in an important visit to the Canadian Parliament and meeting with Members of Parliament from the Conservative and Liberal parties, as well as the heads of CIJA, an Israel advocacy organization with headquarters in Ottawa.
Silberstein told Arutz Sheva that he met with the Members of Parliament to push the idea of implementing a decision made by the Conservative party that, if they return to power, they will move the Canadian embassy to Jerusalem. He provided them with talking points for the media and for their colleagues as to why Canada should move its embassy to Jerusalem.
Silberstein also discussed the establishment of a Jerusalem Caucus in the Canadian Parliament, in order to promote the education advocacy for Jerusalem as Israel’s eternal united capital.
The Members of Parliament accepted the idea with enthusiasm and promised to work together to implement it after the October elections.
Silberstein also met with former Canadian Justice Minister Irwin Cotler and his wife, Ariela, who also expressed enthusiasm and partnership in these ideas and promised to help promote them with the Liberal side of the Parliament in Canada.
Silberstein expressed great satisfaction from the visit and received invitations for follow-up visits which he hopes to do in the near future.
Original Article