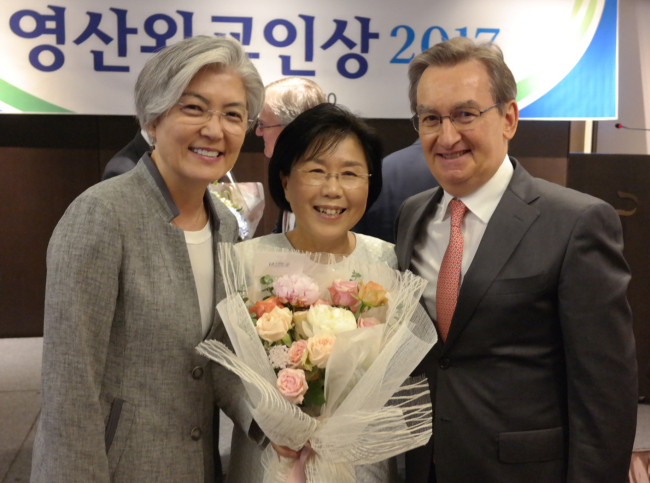 Joel Lee, The Korea Herald
When Korea’s foremost civilian ambassador, Choi Jung-wha, walked along Paris’ Champs-Elysees Avenue last year, she was struck by familiar tunes sung in Korean.
Young French people belted out K-pop band BTS’ songs in Korean, to the surprise of Choi, who first landed in France in the late 1970s for her studies. Back then, Korea, much less South Korea, was barely on the mental map of an average French person.
But with the country’s continuing economic and cultural ascent on the global stage, the Korean language itself, along with its modern and traditional culture, has now become all the rage for youngsters the world over.

In an age of globalism and hyper-connectivity, public diplomacy [JB emphasis] is a realm not confined to diplomats, public figures and high-flying personas, but of all citizens committed to espousing and communicating with the world at large, Choi told The Korea Herald last week.
“I think that public diplomacy, in its full capacity, is only achievable when each and every one of our society meets another individual of a different society heart-to-heart, and not only introduces our own culture, but also embraces theirs,” she said. “Therefore it is no longer strictly the work of government officials or public figures. It falls squarely on all of us. Instead of ranting about our own achievements, we should open our eyes and ears to what the rest of the world wants to see and hear about us.”
Choi is the president of the public diplomacy organization Corea Image Communication Institute, which she founded in 2003 as an institution registered under the Ministry of Foreign Affairs. Choi is also a professor of interpretation and translation of Korean, French and English at Hankuk University of Foreign Studies in Seoul, her alma mater. Aside from her illustrious career as a presidential interpreter, she has written over 37 books, including “K-Style,” “Global Etiquette” and “10 C: Habits for Designing My Life.”
For her decadeslong efforts to promote Korea worldwide and introduce foreign cultures here, Choi was honored with the Yeongsan Diplomat Award in July last year, along with former South Korean Ambassador to the US Ahn Ho-young.
The award was conferred by the Seoul Forum for International Affairs, and at the award ceremony, South Korean Foreign Minister Kang Kyung-wha gave congratulatory remarks in front of British, French, Japanese and Singaporean ambassadors, politicians, businesspeople and journalists.
In 2003, Choi received the highest award in France, the Legion d’Honneur.
“South Korea has achieved political and economic freedom and democracy through its postwar industrialization and democratization, but we still have a long way to go in terms of cultivating universal solidarity, civic tolerance and internationalism,” she said, pointing to the quintessential French values of liberty, equality and fraternity. “Yes, we have achieved liberty and equality, but what we need a lot more is fraternity, solidarity and humanitarianism.”
Due to Korea’s cutthroat material pursuits, many people have instilled an instinct of “me-first,” she argued, adding that through CICI’s activities she has met countless exemplary citizen ambassadors of their native cultures.

“Being a competitive society built on the ashes of the Korean War, we have had rather high opinions of ourselves, while often disrespecting different opinions, ideas and achievements,” Choi noted. “Accepting difference and diversity is particularly important as we increasingly become a multicultural society.”
Pointing out that Koreans have largely thought of themselves as a homogenous nation, the scholar-communicator said the “myth of national homogeneity” is not an asset in today’s globalized world, since progress occurs through the coalescence of different ideas, as well as creativity formed through collaboration and competition.
“In France, children from a very young age grow up mingling with friends of different ethnicities, languages and appearances,” she said. “There, difference and diversity are the norm. Everything depends on education.”
Mentioning CICI’s CQ Forum — a networking platform for opinion leaders with a focus on the five “C” quotients of culture, communication, cooperation, concentration and creativity — Choi said many foreign ambassadors who are members have expressed deep appreciation for the multifaceted opportunities to learn about Korea.
On the future of the country’s cultural promotion worldwide, Choi stressed the need for expanding beyond pop culture to traditional cultural aspects, such as hanok architecture, furniture design, Buddhist temples, meditation, food and drinks.
“I want to tell young Koreans and young generations to live an enterprising, vigorous life,” she advised. “Try to experience the world as much as you can, and push new boundaries. I’m not advising not to take the safe path, but believe me, there are myriad opportunities that are unexplored if you think outside the box.”
As an example, her pupils, instead of working as French interpreters and translators, are teaching the Korean language and culture in Francophone countries, and venturing as far as Africa.
“That is truly an unknown realm,” she commented. “It’s remarkable what some of my students have done abroad, creating new domains and conquering existing ones as the unofficial ambassadors of Korea.”
By Joel Lee (joel@heraldcorp.com)
Original Article