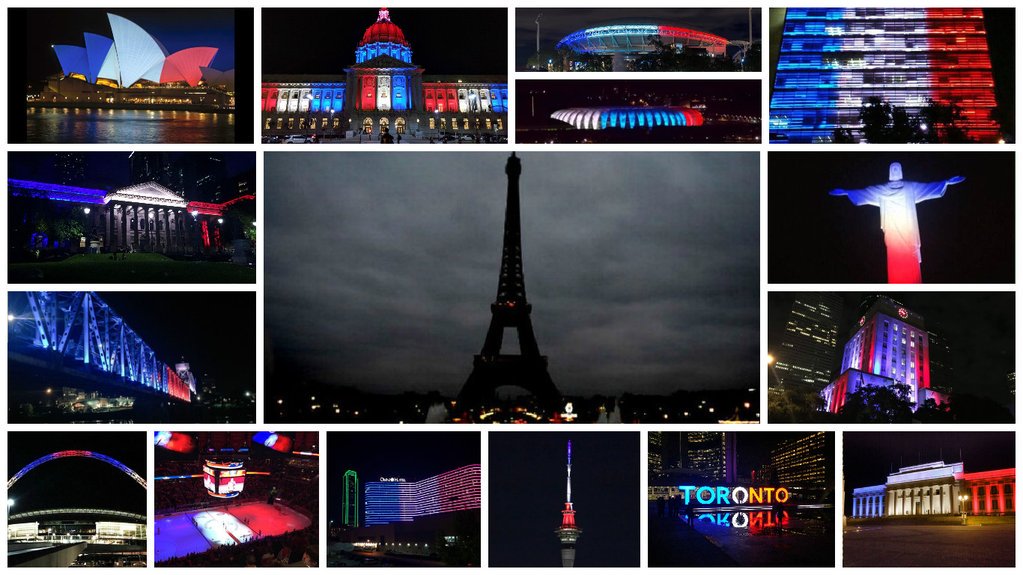 For every action, there is an equal and opposite reaction.

In times of crisis, Newton’s third law of physics offers up a surprisingly robust framework to explore how the world reacts.

After the explosions and multiple shootings that rocked the French capital on Friday night, heads of state and politicians poured out their sympathy for the victims on Twitter.

“This is an attack on all of humanity and the universal values that we share.” —@POTUS on the attacks in Paris https://t.co/yQThOvrdxZ

The reports from Paris are harrowing. Praying for the city and families of the victims. -H

I am shocked by events in Paris tonight. Our thoughts and prayers are with the French people. We will do whatever we can to help. — David Cameron (@David_Cameron) November 13, 2015

But a more meaningful sentiment focused around the hashtag, #PortesOuvertes – as residents of Paris declared an open door policy to people scrambling to find safety in the city as the number of attacks increased and the confusion multiplied.

I have a home in 18th, I speak english and french #PorteOuverte #PortesOuvertes

The people of Paris have responded to #ParisAttacks with #portesouvertes – offering shelter to people who can’t get home to safety — Matthew Ward (@HistoryNeedsYou) November 13, 2015

English speakers in paris, follow the #portesouvertes to get to safety, listen to the radio on 107.1 fm for english news

But at the same time, another hashtag was quickly gaining traction. Supposed supporters of the Islamic State on Twitter adopted the moniker, #باريس_تشتعل, meaning ‘Paris burns’. It was the same hashtag used during the attacks on Charlie Hebdo’s offices earlier this year.

Supporters of the Islamic State appear to be celebrating the ongoing #ParisAttacks on Twitter https://t.co/8aukGjJxaN — Newsweek (@Newsweek) November 13, 2015

#ISIS announces with the hashtag #باريس_تشتعل that will attack major cities including Rome, London and Washington pic.twitter.com/nELyXMTDlt

There have been multiple calls to Twitter to ban the hashtag, but so far the calls have fallen on deaf ears.

The negative sentiment appeared in other ways, too. Some even went so far as to attribute blame more widely and target politicians in their own countries.

We have to stop idiot governments from telling us that muslim immigration has benefits and make them see how dangerous it is.

The internet is a perfect environment for competing ideas to surface and spread after a major world event. In psychology there is a term that perfectly encapsulates this response: vicarious rehearsal.

This term outlines that the further away by distance or relationship a person is from a threat, the more extreme the reaction becomes.

“In some cases, these people may reject the proposed course of action, choose another, or insist that they too are at risk and need the recommended remedy, such as a vaccination or a visit to an emergency room. In its most troublesome form, these “worried well” will heavily tax the recovery and response,” explains the international journal of emergency health.

As the confusion subsides and people start to piece together what happened on Friday 13, others thousands of miles away will also be trying to find their own way of coming to terms with what happened.

It would be futile for this publication to weigh in on who is right or wrong in this case. To join the picket lines on either side of this fence and scream for the other to abandon their opinion and adopt our own does little to aid the grieving process.

As I have said before, no one person or website can hold back the tide of negative sentiment that swirls around the Web. All we can do is try to offer a way to help others interpret their own feelings and maybe, just maybe, learn to empathise with those we share a hashtag with.