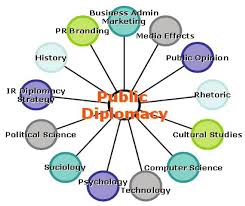 There’s a new article in International Studies Perspectives by … Kadir Jun Ayhan [JB see] on delineating the boundaries of public diplomacy [JB emphasis] and a blog post summarizing his argument. In teaching students want definitions and so Ayhan draws on his teaching experience to distill a definition of public diplomacy from those offered by several well known discussions of the topic. A particular issue that bothered Ayhan’s students is the extent to which non-state actors can be said to do public diplomacy and in his definition he comes firmly (and I think correctly) down on the statist side of the issue.
In reading Ayhan’s post I was struck by the importance attached to the state/non-state issue in the literature. From working on the history of public diplomacies I think that the importance attached to it is misplaced. It comes from the history of International Relations Theory. All the varieties of state-centric International Relations Theory represent the translation of a legal concept of the state into social theory where states are the actors in international politics. Hence an actor that it is not a state or cannot be treated as an organization with states as members is a non-state actor. In the development of IR theory this has tended to morph into an antagonism between state and non-state; that the growth of the non-state comes at the expense of the state. This produces the permanent conflict between varieties of Liberal and Realist theory and arguments over the erosion or persistence of the state.
What this line of development misses is that the modern state as it emerged from the 19th century is a complex of ‘state’ and ‘society’. In this state and social actors are ‘nationalized’ and drawn into a complex and variable web of relations. This tends to more obvious from outside than inside a country. Inside we discuss the legal status of different entities from outside we frequently classify a government, a company, a charity, a foundation by its nationality. In historical terms this can mean that countries that began to think in terms of national influence fairly early (eg France or Germany) were able to detect the advance of British or American influence long before either country had any formal programme of public diplomacy. But while the work of American missionaries in the Ottoman Empire or Rhodes Scholarships in the United States were not ‘public diplomacies’ they did have elements which were based on promotion of national influence (eg ‘Americanism’) and they did enjoy degrees of support from official actors, for instance consular support for missionaries.
The history of public diplomacies is full of actors that are associated with but not formally part of states; German mittlerorganizations, cultural relations organizations, news agencies, charities, civil society groups, friendship societies, broadcasters, private companies and that partly on their own interests, partly on their conception of the national good, and partly on behalf of the state. However, even acting with or on behalf of the state is frequently a more ambiguous thing, does it involve resources, guidance, approval, consultation? The important point is that state/non-state is much more complex that it appears at first look and often any distinction loses of some of its importance because of shared nationality. A ‘non-state’ actor may not be able to do public diplomacy on its own behalf but this doesn’t mean that it’s not a part of someone’s public diplomacy.
Original Article