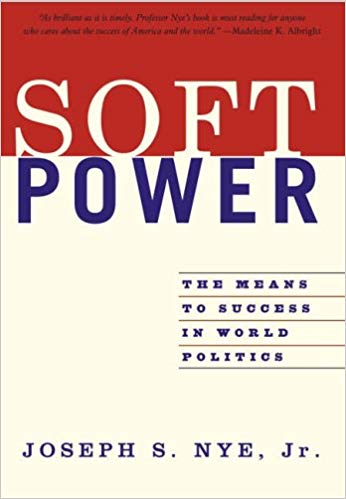 In the autumn of 1990, Joseph Nye sought to re-imagine what American power would like in the 21st century. Writing near the end of the Cold War, Nye offered scholars and policy makers a new conceptual framework through which they could understand power dynamics in a changing world. The Cold War would soon be over, Japanese power was on the rise, multi-national corporations were beginning to accumulate power resources equal to those of states while Europe was moving towards greater integration. Amid this climate of change, Nye argued that power in the 21st century would not rest solely on a nation’s military strength or its financial prosperity. Nor would it depend exclusively on its geography or natural resources. Rather, in a world of shifting sands and emerging powers, American power would depend on its ability to change the behavior of other states, willingly. As Nye wrote in 1990:

A state may achieve the outcomes it prefers in world politics because other states want to follow it or have agreed to a situation that produces such effects. In this sense, it is just as important to set the agenda and structure the situations in world politics as to get others to change in particular cases. This second aspect of power-which occurs when one country gets other countries to want what it wants-might be called co-optive or Soft Power in contrast with the hard or command power of ordering others to do what it wants.

Nearly 20 years after it was first proposed, Soft Power remains a popular term. Since 2018 alone, Nye’s original article from 1990 has been cited more than 600 times. Of course today’s world is markedly different than the one which existed in 1990. Japanese power has declined, China has emerged as a dominant global power, Russian power has morphed as it substituted conventional arms with digital ones, terrorist groups have transformed into states, tech companies have established foreign ministries while instability seems to dominate global politics. From Brexit and Trumpism to ecological devastation, uncertainty is the new norm. The question that emerges is- does Nye’s concept of Soft Power hold relevance in 2019?

Some have attempted to refashion the concept of Soft Power by introducing new terms such as smart power or sharp power. Still others have attempted to integrate Nye’s concept into other fields of study. Such is the case with growing literature on public diplomacy. And it is within the public diplomacy milieu that Soft Power has become banal. I do not mean to suggest that Nye’s original term is banal but rather that Soft Power is now often employed in a banal manner. Countless studies in the arena of public diplomacy employ Nye’s term as an afterthought. Such studies tend to include an introductory paragraph in which Soft Power, public diplomacy and nation branding are all thrown together generating a cacophony of terms with little actual meaning or insight.

Others have gone down the rabbit whole of exploring the relationship between the concepts of Soft Power, public diplomacy and nation branding. Here, scholars debate whether public diplomacy is a Soft Power tool or whether Soft Power is the result of public diplomacy activities or whether nation branding in an instrument for generating Soft Power resources. Yet here again the conversation often becomes dull with studies merely replicating the same arguments in, dare I say, a banal manner. The reason is that such debates tend to be detached from the world around us. As Nye argued in 1990, one cannot discuss terms such as power, Soft Power or public diplomacy without first taking into account the global political environment. Only by understanding the current and future state of the world, can we approach a meaning of Soft Power that is anything but banal.

To understand the world, it is often useful to listen to world leaders who have lost their ability to lead. Once out of office, and shunned by the media, such leaders tend to offer insight that may escape scholars. Such is the case with Tony Blair. In a recent video, Blair advocated that the UK stay in the EU. His logic is fascinating. According to Blair, by 2040 the world will be dominated by three major powers- the US, China and India. A mix of military strength, technological advancements and population size will increase the power of each of the three states. In such a world, the ability of small and middle powers, such the UK, to advance their foreign policy agenda will be limited. The UK will be but another in a long line of middle powers looking to ensure its prosperity amid a field of giants. For this reason, nations such as the UK will need to form temporary coalitions and permanent alliances. Blair views the EU as such an alliance, one that increases the power of each member state as they collectively bargain opposite the three giants- China, India and the US. Yet states such as the UK will also need to form temporary coalitions to advance their foreign policy goals be it multi-lateral forums such as the UN, or during direct negotiations opposite one of the giants (e.g., France and the UK collectively barraging opposite the US on trade incentives).

And so now the question that comes to the fore is what increases the appeal of states? What transforms them into an appealing partner for alliances and coalitions? What makes one country the “bell of the ball”? It is through this question that the concept of Soft Power can be re-conceptualized. For one of the things that increases the appeal of a state is its perceived morality. Indeed, morality breeds legitimacy on the international stage. Countries that are seen as advancing positive values, be it environmental awareness or human rights, have an easier time promoting their foreign policy agenda. Moreover, when states are seen as advancing positive values they encounter less resistance to their actions in the world. This argument was recently validated by General Valery Gerasimov, the Chief of Staff of the Russian Military. When imagining the conditions necessary for toppling another regime, Gerasimov stated that in act one unmarked military personnel must destabilize a foreign capital bringing about internal, violent turmoil. During act two, a state may send in its military under the guise of a peacekeeping mission. For who could oppose a peacekeeping mission meant to bring structure and order to chaos?

The morality of a nation may thus be central to its ability to forms coalitions or become member of coalitions. Soft Power may thus be understood as the perceived morality of a state. But how can morality be managed? What does it mean to be viewed as a ‘moral’ state?

Within nation branding studies, there is an agreement that nations evoke cognitive associations. These are tied to a nation’s past, its actions on the world stage, its commercial brands and even its geography. Switzerland evokes images of the alps, wooden clocks and private banking. Germany evokes images of precision engineering, fast cars and WWII. Nation branding rests on the assumption that states can manage the associations they evoke. Similarly, Soft Power may be defined as managing the normative and moral associations than a state evokes. For in addition to sandy beaches and a bustling high-tech industry, Israel evokes certain normative associations such as abuses of human rights and militarism. India is currently associated with poverty and nationalism, America with racism and bigotry, China with censorship and oppression, Saudi Arabia with cruel and unusual punishments and Iran with religious zeal. In all these cases, moral blemishes deplete states’ Soft Power resources. In the short term these states may still achieve some of their foreign policy goals. Yet in a future that depends on alliances and coalitions, such blemishes may prove fatal.

Finally, one has to wonder how states can increase their Soft Power resources, or in other words, how can states manage the moral and normative associations they evoke? One answer is through digital technologies. Social media is particular useful as states may use social media to identify the norms and values they adhere to and demonstrate, daily, how such norms guide their actions. One positive example dates back to the Obama State Department. Throughout 2015 the State Department used Facebook do identify the values that guide US foreign policy: environmental awareness, engagement with the Muslim world and the promotion of LGBT rights. Posts published on Facebook often demonstrated how US diplomacy was guided by these values. The TTIP agreement was framed as a victory for the environment as it would lead to ‘green’ economical development. The Iran Nuclear Deal was a manifestation of the US’s commitment to engaging with the Muslim world while the recognition of same sex marriage in American was another victory in the struggle for LGBT equality.

A negative example can be found in the digital activities of the Polish MFA. In recent years, Poland has dedicated substantial digital resources to distancing itself from the atrocities of WWII. The MFA’s campaign centers on stating that Poland was the first victim of Nazi Germany and that Polish death camps were in-fact Nazi death camps built on occupied Polish territory. Polish diplomats have often used social media to berate publications for using the term Polish death camps while the current government has passed a bill criminalizing the argument that Poland took part in the Holocaust. This campaign has led to negative outcomes for two reasons. First, the Polish law has led to a backlash which labels Poland as a Holocaust denier unwilling to face its sordid past. The digital campaign may have only strengthened the association between Poland and the Holocaust. In every tweet and YouTube video, the term Poland is followed by the term Holocaust. This may cement a mental association in peoples’ minds between Poland and the atrocities of WWII and the negative values of racism, sadism, hatred and fascism.

So finally, what is Soft Power in the 21st century? It is the ability to manage the normative associations that a state evokes so that a state is seen as a desirable partner for creating temporary coalitions or permanent alliances. It is through such alliances and coalitions that small or middle powers will be able to negotiate with future giants. Enhancing a state’s Soft Power can be achieved through public diplomacy and digital diplomacy as states articulate the values that guide their foreign policy and demonstrate how their actions in the world advance such values.