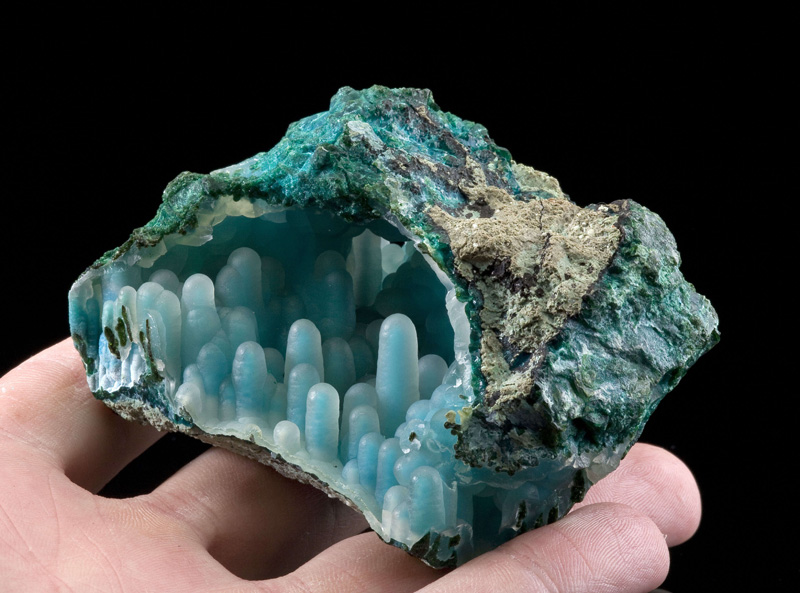 Rob Lavinsky of The Arkenstone (www.irocks.com) brought this fascinating mineral to market, selling it to a buyer for $5,000. The specimen, which Lavinsky describes as Chalcedony on Chrysocolla stalactites (pocket), measures 9 x 7 x 6 cm. It was originally obtained by Frank Valenzuela back in the 1960s from the Inspiration Mine in Arizona, USA. Lavinsky explains:

Frank Valenzuela obtained this specimen from a fellow miner at the Inspiration, where he was a miner and then a shaft supervisor in the 1950s-1960s. It was collected, he recalls, in the early 1960s. It is a classic example of the quartz-covered chrysocolla stalactites from that time, but unusual in that it was preserved as a whole pocket. The piece glows when backlit, as the top surface is partially translucent and there is a small hole in back of the vug, to let light into the pocket for backlighting. The largest stalactites are 2 cm. The pocket opening is 2 inches across. [source]

You can find many more incredible minerals on Lavinsky’s website. Be sure to check out the extensive database as the entire collection is well catalogued and highly informative.

A mineral is a naturally occurring substance that is solid and stable at room temperature, representable by a chemical formula, usually abiogenic, and has an ordered atomic structure. It is different from a rock, which can be an aggregate of minerals or non-minerals and does not have a specific chemical composition. There are over 4,900 known mineral species; over 4,660 of these have been approved by the International Mineralogical Association (IMA). The silicate minerals compose over 90% of the Earth’s crust. [source]

Chalcedony is a cryptocrystalline form of silica, composed of very fine intergrowths of the minerals quartz and moganite. Chalcedony’s standard chemical structure (based on the chemical structure of quartz) is SiO2 (silicon dioxide). Chalcedony has a waxy luster, and may be semitransparent or translucent. It can assume a wide range of colors, but those most commonly seen are white to gray, grayish-blue or a shade of brown ranging from pale to nearly black. [source]

Chrysocolla is a hydrated copper cyclosilicate mineral, has a cyan (blue-green) color and is a minor ore of copper, having a hardness of 2.5 to 3.5. It is typically found as botryoidal or rounded masses and crusts, or vein fillings. Because of its light color, it is sometimes confused with turquoise. Notable occurrences include Israel, Democratic Republic of Congo, Chile, Cornwall in England, and Arizona, Utah, Idaho, New Mexico, Michigan, and Pennsylvania in the United States. [source]