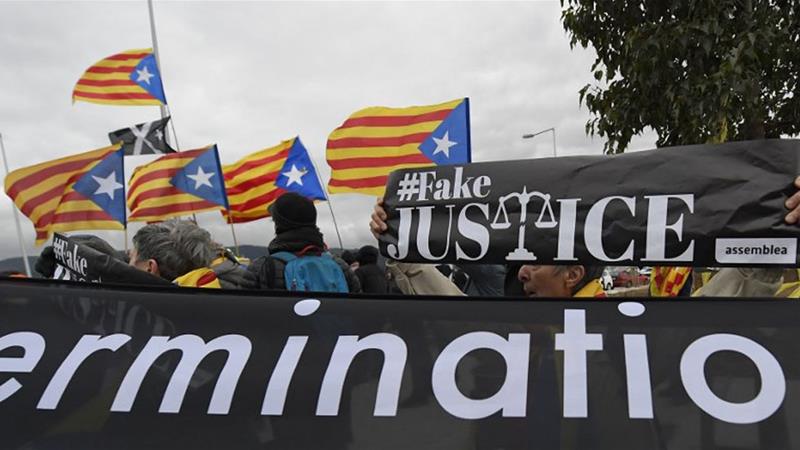 Image from article, with caption: The assessment called for the release of the three separatistsExcerpt:

The detention of three separatists facing trial for a failed bid to prise Catalonia from Spain in 2017 is “arbitrary,” experts mandated by the United Nations have concluded in a report released on Wednesday.
The assessment by independent experts, commissioned by the UN Human Rights Council but not speaking in the name of the UN, called for the release of the trio and compensation.
“The deprivation of liberty of Jordi Cuixart, Jordi Sanchez and Oriol Junqueras is arbitrary,” the panel wrote in the Spanish version of the report.
It argues that the detention of the three men, which has lasted over a year and a half, goes against the Universal Declaration of Human Rights and the UN’s International Covenant on Civil and Political Rights.
However, the Spanish government slammed the report, saying the group’s opinion failed to take into account the crimes said to have been committed as well as ignoring Spain’s laws that ban referendums on the independence of a part of the country.
It said that the group is calling on the government to take a decision that only the courts can take.
In a statement, the government raised “doubts” about the group’s “independence and impartiality” and called on the UN to make sure that its semi-independent working groups are not used “for spurious purposes.”
The report focused only on the three men, and not six others also in jail awaiting trial in the Supreme Court in Madrid, because the trio’s British lawyer Ben Emmerson took their cases to the UN.
Emmerson predicted the prosecutions put Spain “on a collision course with the UN”, calling the analysis a “warning shot” from the UN which Madrid should ignore “at its peril”.
“If Spain cannot show it can be able to behave like a democracy, it has no place at the heart of modern Europe,” Emmerson told reporters in London.
But Irene Lozano, who heads new public diplomacy [JB emphasis] agency Global Spain [see], told the AFP that the UN-mandated experts were “victims of a disinformation campaign” by the Catalan independence movement, which had “skewed facts”. …