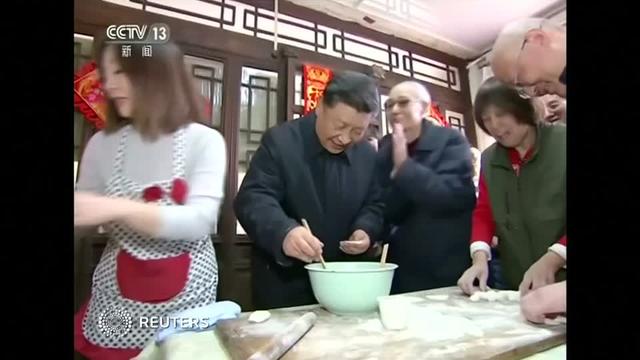 image (not from article) from
Chinese President dropped in on surprised diners at a small Beijing restaurant and chatted with deliverymen on Friday on an apparently unscripted visit ahead of next week‘s Lunar New Year holiday.Such relaxed interactions between senior politicians and the public are uncommon in a country where even leaders‘ birthdays or family backgrounds are often closely held secrets.Leaders generally use the time around the festival to make carefully choreographed, well pre-arranged inspection trips around the country where they flag important policy initiatives or areas of concern for the year ahead.Xi last year visited villagers in a poor southwestern part of China, to press home his campaign against poverty.On Friday, state television showed Xi walking into the restaurant in a southern district of Beijing known for its traditional alleyways and courtyards, asking how much the food was and how long the owners had been in the city.As diners stood up to take pictures, Xi told them not to stop eating on his account.“I‘m just passing through,” he said.As he chatted at a separate location with deliverymen, who speed around Beijing delivering packages on motor-bikes, passersby could be seen in the background walking right behind him, or in one case cycling by.“Are you not able to go home for the Spring Festival?” he asked one of the deliverymen.Still, Xi was almost certainly accompanied by his security detail throughout, even if they were not directly shown in the television footage.In another much more obviously scripted part of the day, he visited policemen and made dumplings with residents in a courtyard dwelling.While Xi has cultivated a man-of-the-people image and is genuinely popular with many Chinese for his war on corruption, he has only rarely had such relaxed interactions since assuming office six years ago.
In 2014, Xi shocked Beijing residents by visiting courtyard homes and chatting with passersby near a shopping street during one of the city‘s notorious smoggy days, drawing praise from social media users for his unusual public diplomacy [JB emphasis].
The week-long holiday, starting on the eve of the new year, on Monday, is the most important in the Chinese calendar, when millions of people travel home, many for the only time in the year.
***