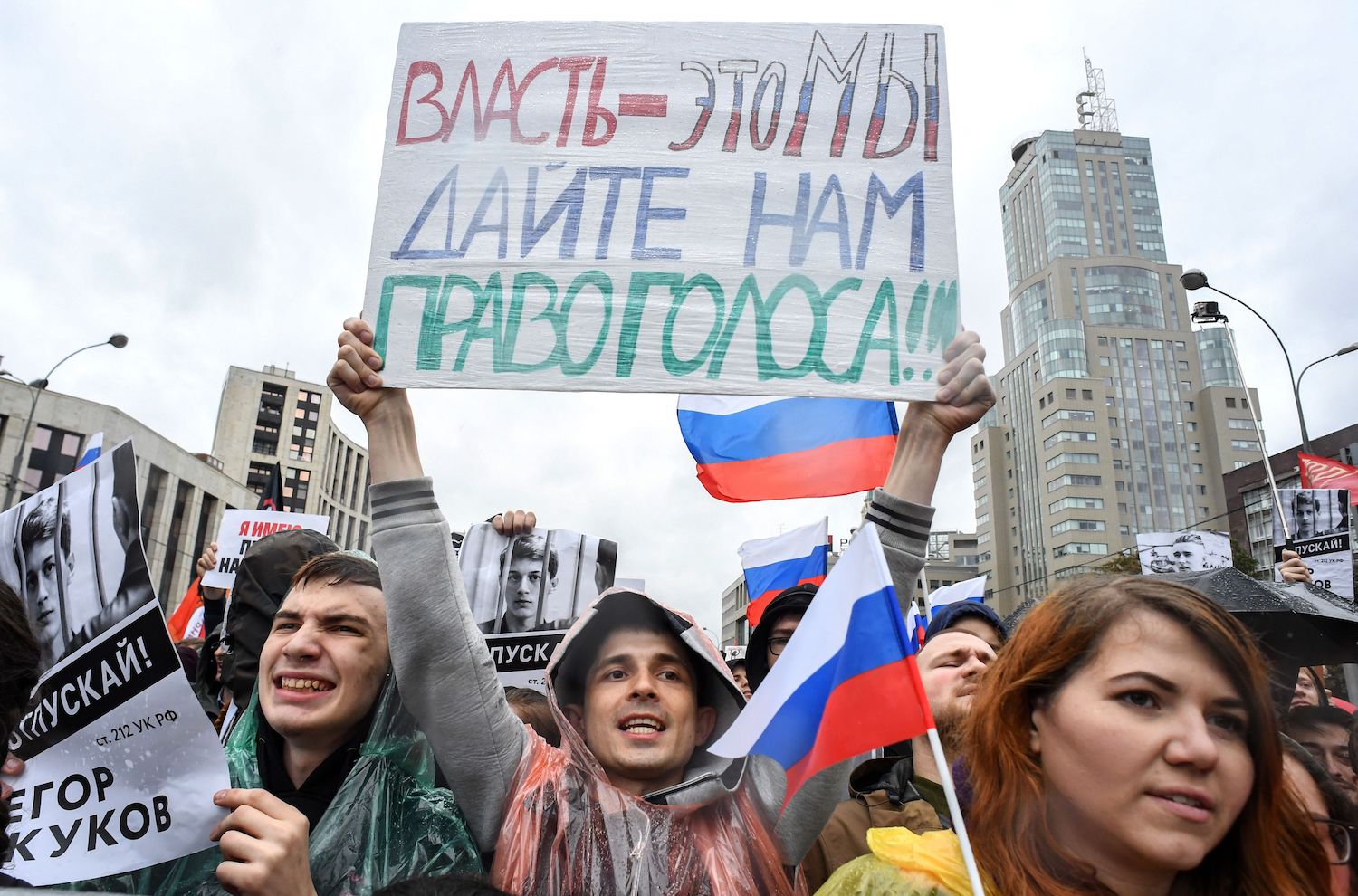 Since U.S. President Donald Trump was elected in 2016, the world has come to view the U.S.-Russia relationship almost exclusively through the lens of Trump’s interactions with Russian President Vladimir Putin. Beginning with early suspicions about the Trump campaign’s ties to the Kremlin and continuing into 2019 with the release of U.S. special counsel Robert Mueller’s report on election interference, Trump-Putin personal exchanges have driven a dark public narrative. While it is not unusual for a relationship between two countries to blow hot or cold based on leadership dynamics, U.S.-Russia relations have received unprecedented scrutiny due to suspicions of collusion and obstruction.

The official relationship is not the only casualty. The ways in which the U.S. and Russian populations perceive each other are also deteriorating rapidly. Contrary to an early narrative of Russian appreciation for Trump because of his embrace of Putin, Russians’ favorability of the United States has dropped significantly—from 41 percent in 2017 to 26 percent in 2018, according to a poll by the Pew Research Center. Sanctions, relentless anti-U.S. propaganda, and geopolitical standoffs in Ukraine, Syria, and Venezuela are all responsible. A majority of Russians believe the relationship with the United States is only getting worse, and confidence levels in Trump dropped from 53 percent to 19 percent during that same period. In the United States, 64 percent of Americans have an unfavorable view of Russia, while only 21 percent have a favorable one. Travel between the two countries has also declined in recent years, particularly for Russians coming to the United States.

While frictions in the U.S.-Russia relationship are likely to persist as long as the Kremlin continues to attack Western democratic institutions, we should not write off the worsening ties between the countries’ populations as an inevitable consequence of geopolitics. The United States should urgently consider how to reinvigorate and recast public diplomacy programs in Russia to lay the groundwork for a better relationship in the future, particularly by fostering connections with the younger generation of Russians.

Public diplomacy—or official efforts to inform and influence foreign public audiences—has been an essential component of U.S. efforts to build stronger bonds with the Russian people since the end of World War II. While much of the bread and butter of public diplomacy incorporates educational, professional, and cultural exchanges, the postwar U.S. government also viewed public diplomacy as a critical tool for curbing the spread of communism and the influence of the Soviet Union. These efforts undoubtedly played a key role in bringing the Cold War to an end by undercutting the notion that the Soviet Union could deliver more wealth, innovation, or happiness than could Western societies.The next U.S. president should take steps to reshape Russian perceptions of the United States amid the current breakdown in official relations and rise in anti-American propaganda.

While there was initial progress in expanding reciprocal public diplomacy programming between the United States and Russia following the collapse of the Soviet Union, this positive movement did not last long. Gains made during much of former Russian President Boris Yeltsin’s time in power, from 1991 to 1999 were lost in the Putin era, particularly after he returned to the presidency in 2012.

Putin’s return to power brought a renewed wave of Kremlin-stoked anti-American sentiment. Despite former U.S. President Barack Obama’s efforts to reset the relationship with Russia in 2009—as members of the administration, we were involved in efforts to stand up a bilateral presidential commission to foster deeper cooperation—the Kremlin’s anti-Western narrative kept public opinion of the United States low, especially once the relationship soured in 2012. According to a 2015 Pew poll, more than 80 percent of Russians held negative views of both the United States and NATO toward the end of the Obama administration.

Putin’s systematic efforts to restrict the presence of international bodies in Russia has contributed to a highly constrained environment for U.S. public diplomacy efforts.

The next U.S. president should take steps to reshape Russian perceptions of the United States amid the current breakdown in official relations and rise in anti-American propaganda. Beyond the obvious fact that the United States has to look for new and creative ways to advance contact between Russian and American societies, U.S. public diplomacy programs have to be recalibrated to speak more effectively to the younger generation of Russians who represent the country’s future. Our experience managing public diplomacy programs under Obama suggests that the most effective ones are those that connect young people directly.

A common misperception is that younger Russians are, as Ivan Krastev and Gleb Pavlovsky have argued, “among the most conservative and pro-Putin groups in society.” But while younger Russians do express high levels of support for the Putin regime, especially on geopolitical issues like Crimea or NATO enlargement, they have also been the dominant force in recent anti-regime protests. As Maria Snegovaya has noted, urban students in particular tend to be “more liberal and opposition-minded than the rest of the population.” Other sociological studies also show that many younger Russians espouse Western values, such as a desire for individual rights and equality before the law, as well as an eagerness to travel to the West.

More than 40 percent of Russians aged 18 to 24 say they would like to move permanently abroad, and Western Europe and the United States top their list of preferred destinations. A 2018 Levada Center poll also found that in spite of relentless propaganda directed at the United States, about 60 percent of Russians under 25 viewed the country favorably.

As the recent protest wave in Russia has shown, younger Russians are less susceptible to the regime’s stigmatization of civic activism, which many older Russians still associate with the “wild 1990s.” Although many youth are justifiably skeptical that the system can be changed, this does not necessarily mean they share its values. Most young Russians get their news from independent online sources, and a growing number of them have traveled to the West, allowing them to draw their own conclusions about the differences between democratic and authoritarian systems.

Certainly, U.S.-funded news outlets should continue to provide Russian-language audiences with fact-based reporting on the Putin regime, but these efforts should be separate from public diplomacy programs that focus on making personal connections. By focusing on what unites their societies rather than what divides their governments, the United States stands a much greater chance of piercing through the Kremlin’s anti-Western narrative.

U.S. public diplomacy also has to be more nimble and creative, reaching out to the next generation of Russians by employing younger, more credible voices. Many Russian vloggers have built up large followings by speaking to resonant issues, and this is a model that could be easily replicated to reach Russian youth directly. Providing grants to support Russian-speaking vloggers who live in the Baltic States and Ukraine, for example, would be one way to creatively break down the Kremlin’s narrative about the Western bogeyman. Discussing Western athletes, performers, innovators, and entrepreneurs—especially those with Russian roots—is also a great way to begin a conversation.

One of the keys to engaging the next generation of Russians is to do so in person, whenever possible. False narratives have a harder time taking root when confronted by a real human face. In particular, the Trump administration should prioritize working with Russia to reinstate the Future Leaders Exchange (FLEX) Program, which was the largest U.S.-Russia educational exchange program until Russia ended its 21 years of participation in 2014. FLEX, which is still robust in several Eurasian countries, provided invaluable opportunities for Russian high school students to spend several months with a U.S. host family for an immersive experience in American life.

With so many means of communication at its disposal, the Kremlin has to a large extent successfully cast the United States as a hypocritical and aggressive power bent on taking Russia down under the guise of spreading liberal democracy. U.S. public diplomacy programs have largely failed to push back against this narrative because they too often play on Putin’s terms, engaging on geopolitical issues rather than on common values. These programs often seek in vain to explain the advantages of NATO enlargement or the dangers of aggressive Russian nationalism to audiences bombarded with propaganda about how the United States is constantly trying to weaken Russia. At the same time, the United States has phased out a large portion of its successful Cold War programming that helped shape opinions abroad using the soft-power appeal of U.S. innovation, commerce, science, and culture. All of these programs could be used again to connect to younger Russians today. The United States must not give up on soft power as a relic of the past. It is still the country’s greatest advantage in a world where corrupt authoritarianism is the main alternative to liberal democracy.

Spencer P. Boyer is a senior fellow at the Penn Biden Center for Diplomacy and Global Engagement. He was a deputy assistant secretary of state in the Bureau of European and Eurasian Affairs and a national intelligence officer for Europe in the Obama administration. Twitter: @spencerboyer