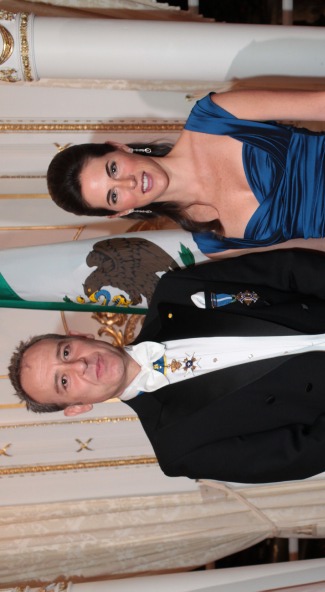 Arturo Sarukhan Casamitjana (born 14 September 1963) is a Mexican diplomat. He is currently Chairman of Global Solutions/A Podesta Company, a strategic consulting firm based in Washington, DC. He served as Mexican ambassador to the United States from January 27, 2007 to January 10, 2013; as former Consul General at New York City; as foreign policy coordinator in Felipe Calderón‘s presidential campaign and transition team (February – November 2006); and as Chief of Staff for Policy Planning in Mexico’s Foreign Ministry (SRE).

His grandfather, Artur Sarukhanian, was a Russian Armenian aide to the 2nd Minister-Chairman of the Russian Provisional Government, Alexander Kerensky. After Kerensky was overthrown by the Bolsheviks, Sarukhanian moved to Venice, Italy where he trained at the Mechitarist seminary. Sarukhán’s grandmother fled to Thessaloniki, Greece during the Armenian Genocide, then moved to Venice, where she met and later married Sarukhanian. Shortly after Benito Mussolini came to power, they left Italy for Mexico.[3]

On his mother’s side, Sarukhán is a descendant of Spanish Republican refugees. The Casamitjanas, a Catalan family, crossed the Pyrenees into France at the end of the Civil War and after the fall of Barcelona, and were held in a French concentration camp. They sought asylum in Mexico, when then President Lázaro Cárdenas welcomed thousands of Spanish Republicans who fled after the victory of Francisco Franco’s fascist forces.

Sarukhán graduated from El Colegio de México with a bachelor’s degree in International Relations and received a master’s degree in U.S. Foreign Policy at the School of Advanced International Studies (SAIS) of Johns Hopkins University in Washington, D.C., where he studied as a Fulbright scholar and Ford Foundation Fellow. In 1988–1989, before joining Mexico’s Foreign Service, Sarukhán served as the Executive Secretary of the Commission for the Future of Mexico-US relations, a non-governmental initiative funded by the Ford Foundation to recast the Mexico-US relationship.[4]

He has served in different posts at the Secretariat of Foreign Affairs. In 1991, he was Deputy Assistant Secretary for Inter-American Affairs and during that period he also represented Mexico at the Agency for the Prohibition of Nuclear Weapons in Latin America and the Caribbean (OPANAL). In 1993, he was posted to the Embassy of Mexico in Washington DC and was the Chief of Staff to the Ambassador, during the NAFTA negotiations.[5] In 1995 he was put in charge of the office for antinarcotics in the same diplomatic mission. In 2000–2003, Sarukhán was designated Chief of Policy Planning to the Secretary of Foreign Affairs, and served as Consul General in New York City in 2003–2006.[6]

On 3 February 2006, he requested a leave of absence from the Foreign Service and left his post at the Consulate General in New York City to join Felipe Calderón‘s presidential campaign as international spokesperson and coordinator of foreign affairs.[7]

He was appointed Ambassador to the United States on 27 January 2007.[1]

Sarukhán is member of several organizations. He was vice-chair and then chair of the Executive Council on Diplomacy Ambassadors Advisory Board, Board member of the Philharmonic Orchestra of the Americas; Advisory Board member of the Post Classical Ensemble; member of the Advisory Board of the Mexico Institute of the Woodrow Wilson Center for International Scholars,[4] and ex officio member of the Board of Directors of the US-Mexico Foundation. He is a Distinguished Associate at Brookings Institution, and serves on the boards of the Americas Society and the Inter-American Dialogue. He is a recipient of the Grand Cross of the Order of Civil Merit of the Kingdom of Spain, and has been awarded the insignia of Commander of the Order of the Polar Star of the Kingdom of Sweden.[8] In November 2010, he was presented with the B’nai B’rith Excellence in Diplomacy Award.[9]

In October 2009, Sarukhán became the first Ambassador in Washington, D.C. to have a personal Twitter account. He tweets under the handle @arturo_sarukhan.[10]