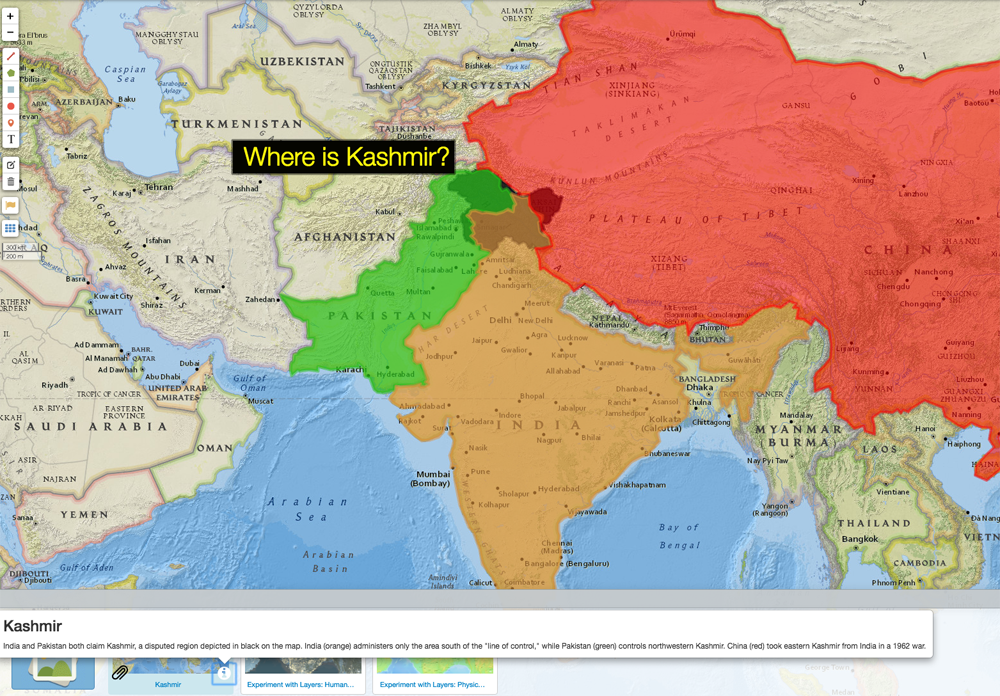 image and text (not from article) from
The Indian state’s repeated blunders in Jammu and Kashmir have often been chalked down to ineffective political governance and security policy choices. While this is true, it is also time to acknowledge the colossal Indian failure in articulating a coherent, viable narrative about Kashmir and disseminating it effectively. States seldom secure legitimacy if they are unable to shape opinions, perceptions and more importantly the diverse “assessments of existence” of those that they seek to serve and manage. This is not to endorse an “Orwellian order” in which power is maintained precariously through the threat of punitive action. Rather, it is to acknowledge that political legitimacy resides firmly within the rubric of a public sphere favorably disposed to the political regime. In other words, state legitimacy depends on an effective identification with the state, one that is reinforced by persuasive rhetoric through the channels of communication that traverse across political and public life.

"The Indian government, however, has displayed remarkable and consistent ineptitude in communicating on Kashmir, with Kashmir and for Kashmir ["].

It has expended copious amount of resources talking to Kashmir, talking up some elements of Kashmir and talking down others, without any rational assessment of what must inform its priorities and emphases for the state. At its core, India’s communication on this vital subject feeds just one unintended imagery: the portrayal of a significant and growing distance between Srinagar and New Delhi.
Unsurprisingly, the Indian state is constantly at a disadvantage when it comes to narratives on Kashmir. Most international media outlets, for example, continue to juxtapose “Pakistan Administered Kashmir” with “Indian Administered Kashmir,” as if to suggest that there is some real historical equivalence between the two. Pakistan’s long history of employing state-sponsored militias first, and terrorists thereafter, has yet again been normalized as fact by much of the Western media. These same organizations have otherwise obsessed over the “war on terror” when Islamist groups, remarkably similar to those responsible for violence in Kashmir, have wrought their violence on Western targets from London to Paris. For instance, an article in the venerable New York Times, described the recent terrorist attack in Kashmir as a “bombing.” Similarly, internationally recognized terrorist groups have often been referred to as “militants”and their homegrown counterparts as “militias”.
Just to put this pattern of usage in context, the term “militia’ finds mention and a role in the constitution of the United States of America. While its usage in the South Asian context by certain media organizations and persons is a mischievous attempt to frame terrorists as the ‘resistance,’ it also clearly signals a failure of the Indian state in the realm of strategic communications.

"Calling out the hypocrisy and bias of the Western media must not be the sum total of India’s response. ["]

The knee-jerk outrage of the Indian state and citizens merely exposes and accentuates the core frailty of our ability to shape meaningful and abiding narratives in the marketplace of ideas. Therefore, it is time to ask how India can strategically reshape and influence the new ‘information sphere’ that is represented by a potent mix of legacy and new media.
There are a few crucial factors that will need be addressed as central to such an effort if it is seriously contemplated by mandarins on Raisina Hill.
Growing information flows in cyberspace negate size and resource asymmetry. Simplistic messages about India being a new “colonial power” go viral on social media—while the reality of a developing and pluralistic democratic state combating religiously motivated foreign terrorists and their local proxies is often lost at a time when even competent news organizations are increasingly Fox-like (and Fox-lite) in their headlines and reportage. Western audiences, who have appointed themselves as the arbiters of Asia’s post-colonial troubles, are more easily swayed by the former than the latter. And their near-theological affection towards an errant Pakistan only exacerbates India’s challenge. Bush Jr.’s approach to galvanize the media sphere by deploying a simple and emotive bumper sticker tag line like the “War on Terror” may not work in the Indian case. His was a distant war in a remote land that many, if not most, Americans were ignorant of; this is a conflict in which one’s own people, in many senses of the word, are implicated.

"There is therefore an urgent need to create both sophisticated messaging and means of delivery. The inability of key Indian interlocutors to communicate the low threshold of provocation and unyielding aggression by Pakistan will have adverse implications on Kashmir and its location within larger debates about Indian politics, society, and culture."

The great epics and religious texts of the world, whether the Iliad, Mahabharata, or Bible, tell us that narratives shape external perceptions. And as the age of digital and virtual technologies reminds us so powerfully, they shape our imagined realities as well.
From the thinker Baudrillard we know that in our hyper-mediated age, the real and the virtual are not so much binary opposites as parts of the same continuum of perception. For instance, we must consider the fact that all strategic communication vis-a-vis Pakistan (as framed currently) affects the Kashmir debate. If we need to dislodge, dis-embed and decontextualize Kashmir from the India-Pakistan conflict (a stated Indian objective), our communications game needs to be radically overhauled. India must calibrate its doctrines, bureaucracies and human capital to operationalize an approach that survives the democratic cycles of the central and state government. The Indian state must be able to synchronize official messaging in a way that reaches both a general audience and selected ones. As it does so, it must be prepared to declutter three interrelated but overarching narrative strands.

"For one thing, those advocating for Kashmiri independence often conflate the protection of Kashmiri identity with the notion of Kashmiri sovereignty. It is a failure of imagination that has allowed this thinking to flourish. ["]

India has always been a syncretic society. Multiple ethnic, religious, linguistic and cultural identities have flourished over time. The nature of political regimes in the Indian sub-continent could never alter the extent and texture of pluralism and this is unlikely to change now. Three states in the Indian northeast consist of Christian majority populations. There is no reason that citizens in a Muslim-majority state cannot exercise full political and religious freedoms under India’s constitutional setup. This is consistent with precedent in terms of the longuedurée of Indian history and with the spirit of pluralism that marks the reality and ethos of the Indian constitution. As a corollary, can a new narrative help create and revitalize this strong ‘Kashmiri Identity’ to negate the insurgency?
Second, the Kashmiri movement is not a call for “Azadi” in the way the Indian freedom movement envisioned the term. The Indian government would do well to employ counter-narratives to dispel this notion. India’s demands for self-determination were driven by the desire to secure full constitutional rights for every individual. There is little evidence that this is the reality in Kashmir. Every passing year, the demands are clearly driven by extremist fundamentalist impulses that are at complete odds with the notion of democratic freedoms. This is antithetical both to the spirit of India’s freedom movement and its democratic values today. Theological fundamentalism must not be allowed to displace or compete with the secular freedoms guaranteed by the Indian constitution, even if these are less than perfect in delivery.

"Instead, all strategic communications must focus on the sustained determination of the Indian state to enhance ‘delivery of democracy”, implicitly recognizing past failure as a necessary precondition for reintegration of the people. ["]

Finally, the Indian state must not allow terrorists to turn into martyrs and freedom fighters. There is little legitimacy to the claim that it is Indian violence that compels young Kashmiris to take up the gun. There is a reason global terrorist groups invest so heavily in multimedia teams and in using the internet as a tool for recruitment. As the examples of mass shooters in the US, terrorist recruits for Al Qaeda, and Western-raised Muslims seduced by the fantasies peddled by ISIS show, engaging stories and compelling narratives are incredibly effective at radicalizing susceptible individuals. This is not to suggest that the Indian state should ignore the real grievances of the Kashmiri people. Rather it is to point out that there is enormous value in communicating the truth about India’s investments in the economic prosperity and governance of Kashmir with a laser focus. This is true of the military as well, which is often the first responder in times of humanitarian or environmental emergencies. It is time to personalize and humanize the Indian state and its apparatus for the people of this geography, however flawed it may be at this time. This is a precondition for engagement.

"A mature public diplomacy doctrine must form part of a comprehensive new framework for the state that includes deeper and wider political dialogue and visible economic investments.["]

India must learn to tell a story that is on point in its message and polysemic in reach. It must resonate with different constituencies across the political spectrum and be easily accessible for domestic and international audiences. The easiest part of all of this is that India has had an incredible story to tell since independence. Despite many hiccups along the way, India continues to deliver greater political and economic freedoms and personal security to its citizens than, arguably, most post-colonial states. And this objective, after all, is the principal motivation for organizing complex societies through democratic values.
Applying this story to Kashmir is complicated by both domestic and external factors. Nevertheless, it holds strong potential for appeal if it is capable of being communicated effectively. During the Cold War, the US established a special Information Agency [JB: see] whose only goal was to better explain American policies and the values that underpinned them. If India is serious about finding solutions in Kashmir, it must invest in institutions and actors that can streamline messaging about what those solutions are exactly.
Original Article