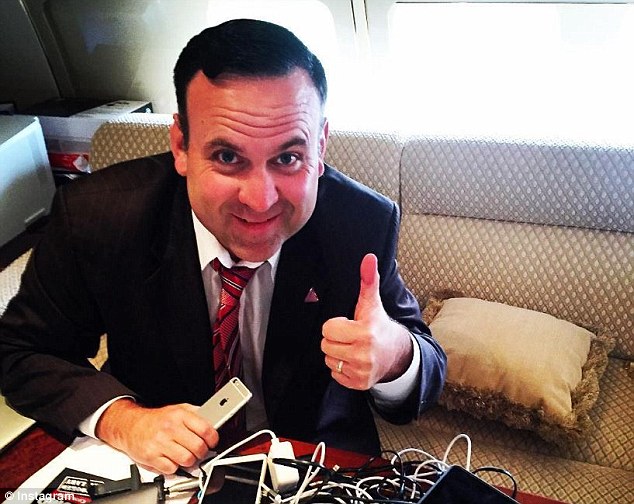 Daniel Scavino Jr. (born 1976) is the White House Director of Social Media and Assistant to the President. [1] His appointment was announced on December 22, 2016.[2] Previously he was the general manager of Trump National Golf Club Westchester and the director of social media for the Donald Trump presidential campaign, 2016.

Scavino is the descendant of Italian immigrants who came to the United States in the early 20th century.[3]

In 1992, Scavino was selected caddie for Trump’s golf party at Briar Hall Country Club (later renamed Trump National Golf Club Westchester). He graduated from the State University of New York at Plattsburgh in 1998 with a B.A. in communications. Scavino worked a few years at Coca-Cola Enterprises and Galderma Laboratories before being promoted to general manager of Trump National Golf Club Westchester.[4]

In a May 2009 interview, Scavino praised former president Bill Clinton, calling him “one of the most unbelievable people I’ve ever met, as far as charisma.”[5]

Scavino was involved with Donald Trump’s presidential campaign since it began in June 2015. In February 2016, Trump appointed Scavino as the campaign’s director of social media. Over July 4, 2016 weekend, controversy arose when Trump’s Twitter account posted an image selected by Scavino of Hillary Clinton with a text in the shape of a Star of David calling her the “Most Corrupt Candidate Ever.” The image had originally appeared on an anti-Semitic, white supremacist message board. Trump’s team defended its use saying that the star was a “sheriff’s badge”, before eventually deleting it and posting a new picture with a circle replacing the star.[4]

On December 22, 2016, Scavino was announced to be White House Director of Social Media under President Donald Trump.[2]

In April 2017, ethics attorney Richard Painter accused Scavino of violating the Hatch Act (which bars executive branch employees from engaging in electoral activities) after Scavino, from his personal Twitter account, had called for defeating Congressman Justin Amash.[6] The Office of Special Counsel then informed Scavino that his tweet had indeed violated the Hatch Act and warned that future violations “could result in further action.”[7] In May 2019, Politico reported that Scavino frequented the /r/The_Donald subreddit.[8]

To date, Scavino is the longest-serving aide in the Trump Administration.[9]

Daniel and Jennifer Scavino were married in 2000; they have two children. His wife filed for divorce in January 2018.[10]