The annual meeting of the United Nations General Assembly, which begins today in New York, usually involves a long convoy of limousines on the streets of Manhattan as world leaders and their entourages congregate to discuss the world’s problems.But even as the UN marks its 75th birthday, one of the world’s biggest problems right now – the Covid-19 pandemic – means it has had to resort to “digital diplomacy” in its biggest annual event.

No presidents or prime ministers will be physically present and only a small number of representatives from the UN’s 193 members – those already in the US – will be allowed to gather in the Assembly Hall.

The real action will be on video today with a series of pre-recorded addresses, including a rare one from Russian President Vladimir Putin, who in the past has let his top diplomats speak for him.

US President Donald Trump, French President Emmanuel Macron and Iranian President Hassan Rouhani will all address the Assembly Hall within hours of each other.

Noel Dorr, a former Irish Ambassador to the United Nations, believes that the lack of face-to-face meetings at the assembly will be a major loss this year.

“It would perhaps be better if they were there in person. The Annual Session starting on the third Tuesday in September in the past, it’s always been a great occasion for world leaders to come together,” he says.

What this year’s assembly will be missing is the important chance for members, particularly from smaller countries, to rub shoulders with those who wield more power.

“Some of the benefits of it are not just what’s said in the General Assembly, but the chance to meet in the corridors and at separate meetings between all kinds of world leaders, large and small and to do it in privacy in a way that could be helpful to co-operation,” Noel Dorr says.

Ireland joined the UN in 1955, ten years after it was set up in the aftermath of the devastation of World War II.

In an address to the UN on the occasion of its 75th anniversary last night, President Michael D Higgins said the United Nations “must be our United Nations”.

“It will only be successful in pursuing our common objective of sustaining peace if we, the Member States, re-commit to its founding principles to which we dedicated ourselves 75 years ago,” he said.

He said a new way of thinking was necessary for this to happen and he was critical of the UN in recent decades for failing to properly tackle issues including poverty, hunger and climate change which he described as “an affront to humanity”.

“We share a planet with hundreds of millions of people who, even as we speak here today, are locked in avoidable hunger and diseases, deprived of their most fundamental rights, deprived of a dignified existence.”

Ireland is preparing to again take up a temporary seat on the UN Security Council in January next year, and Mr Dorr believes that whilst it will be a difficult job, Ireland will play an important role in tackling some of these issues.

“We will try to use the UN Security Council in a selective way to do what we can. It would be wrong to believe you can do everything as a small member state because the five big members are sitting there with the possibility of any one of them vetoing what you want to do. That leaves a certain amount that can be achieved if you’re careful and selective in your targets,” he says.

He added: “I wouldn’t want to exaggerate the possibilities of what we can achieve”.

“Ireland is very strongly committed to trying to use it, build it up, focus it on world problems, and on the Security Council we’ll be in a position to do something about it, along with other small countries.”

Appealing for the world’s nations to work together, UN Secretary-General Antonio Guterres said last night that the pandemic “has laid bare the world’s fragilities” which he said could only be addressed together through “multilateral solutions”.

His comments come at a time when the US President has hit the headlines for his disregard for international cooperation during the pandemic, with Washington leaving the World Health Organisation.

The US has also bowed out of global deals on climate and Iran and has left the UN Human Rights Council.

China’s President Xi Jinping took an apparent swipe at the US last night, saying: “No country has the right to dominate global affairs, control the destiny of others, or keep advantages in development all to itself.

“Even less should one be allowed to do whatever it likes and be the hegemon, bully or boss of the world. Unilateralism is a dead end.”

Mr Xi’s remarks were not in the video he recorded for today’s meeting, but were included in a longer statement that the Chinese UN mission said was submitted to the world body.

Mr Dorr says it is unfortunate to see this change in US diplomacy from a member that had the biggest hand in founding the UN.

“It’s very regrettable at present that the United States, under Donald Trump, has been withdrawing from many international commitments and organisations,” he says.

“The sad thing is that the basic structure that we have today in the UN and all its agencies was largely promoted by the United States. It was they who began the planning for a post-war international organisation, even in the early years of the war, even before they had joined in the war at Pearl Harbour and it was so often the United States that was the force behind what’s called multilateral action, cooperative action of states. I’m afraid, under Donald Trump, it has turned its back on all of that.”

He says his hope in this election year is that the US, as a major power “will turn its mind again towards a world of structure and order, rather than a world of every state for itself”.

75 years – what the future holds

Reflecting on the birth of the United Nations 75 years ago, Mr Guterres told the commemoration ceremony that “it took two world wars, millions of deaths and the horrors of the Holocaust for world leaders to commit to international cooperation and the rule of law”.

He added: “That commitment produced results. A third world war, which so many had feared, has been avoided. Never in modern history have we gone so many years without a military confrontation between the major powers. This is a great achievement of which member states can be proud and which we must all strive to preserve.”

Reflecting on its achievements, Mr Dorr says the UN “is a very imperfect organisation”, but he says it is the only organisation of its kind and “the question is to try to make it work better”.

“It has become a world in times of crisis where states tend to act for themselves. What’s needed is more international cooperation and the UN is the vehicle for that,” he adds. 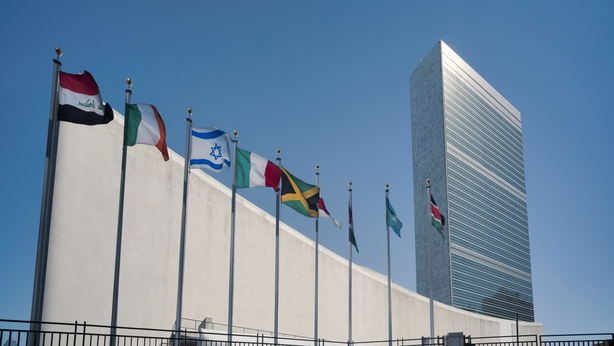 Mr Dorr believes the UN today can be seen as “a rather fragile and sometimes ineffectual organisation”, but he believes its strengths lie in the network of other organisations that have been built up around it, like the branches of a tree.

These include members of the “UN Family” such as the World Health Organisation, World Bank, World Food Programme, UNICEF and UNIFIL, to name but a few.

He says it is currently the closest the world has to an overarching organisation or authority.

“The world is fragile and if I think back on the 20th century, one of the really dramatic moments was when human beings left the planet for the first time on the spacecraft going to the moon and looking back on the whole earth as it is – the blue planet with oceans and land but just a single planet and the only planet in the whole universe where we know any life exist,” he says.

He adds: “So we come very much to a consciousness of the world as a single planetary entity and how fragile it is, particularly in the areas of climate and if there is to be war, we have epidemics now spreading because of the travel and so on, so the consciousness of being a single world has certainly come home to a lot of us.”