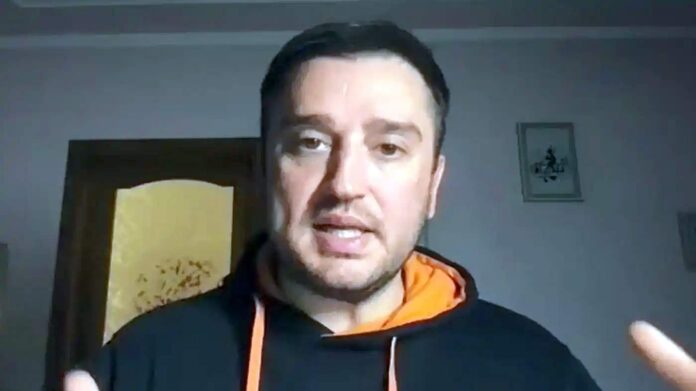 Nearly 300,000 people have joined Ukraine’s IT army, according to Alex Bornyakov, deputy minister for digital transformation. (Image from online interview)

PALO ALTO, U.S. — Ukraine has sought the assistance of more than 70 IT companies in its campaign against the Russian invasion, the country’s deputy minister for digital transformation told Nikkei.

“Every day more and more (are) joining,” Alex Bornyakov said in an exclusive online interview Saturday, illustrated by the suspension of Russian operations by PayPal and others.

As part of its digital diplomacy, Ukraine has urged tech companies to halt Russian operations with an eye to sowing discontent among the Russian people and corporations. Apple has suspended sales of its iPhone and other products in Russia, and American software companies Microsoft and Oracle have made similar moves.

“In terms of digital diplomacy, we need to reach as (many) as we can until they stop,” Bornyakov said. “Our ultimate goal is to make Russian military forces (go) back to Russia and leave us alone.”

Ukraine’s Ministry of Digital Transformation was established in 2019 to bring government services to smartphones. Following Russia’s invasion, however, the ministry was forced to “completely” reorganize in two days, Bornyakov said.

As a precaution, Ukraine sought access to SpaceX’s Starlink satellite internet service, according to Bornyakov. SpaceX founder Elon Musk responded to a tweet from Ukrainian Digital Transformation Minister Mykhailo Fedorov in what Bornyakov described as “a miracle.”

Initially some 400 Starlink terminals were provided, then the number climbed to the thousands, according to Bornyakov. Priority has been given to the military and major government institutions to ensure communication channels.

The ministry announced the creation of an IT army on Feb. 26. Nearly 300,000 IT engineers and others from around the world have since joined, according to Bornyakov. In addition to combating Russian cyberattacks, they are working to disseminate accurate information to the Russian public at a time of heavy censorship by Moscow.

Ukraine has even solicited cryptocurrency donations since the invasion, with $78 million raised as of Saturday, according to Bornyakov. He said the use of non-fungible tokens would also be considered. One plan envisions digital images of the invasion by the Russian military on a timeline, he said, and NFTs would be used for their sale.

Bornyakov resided in Kyiv when the Russian invasion started. He has since moved to an undisclosed location. Core members of the digital transformation ministry work together in the same location, but many others are dispersed, he said.