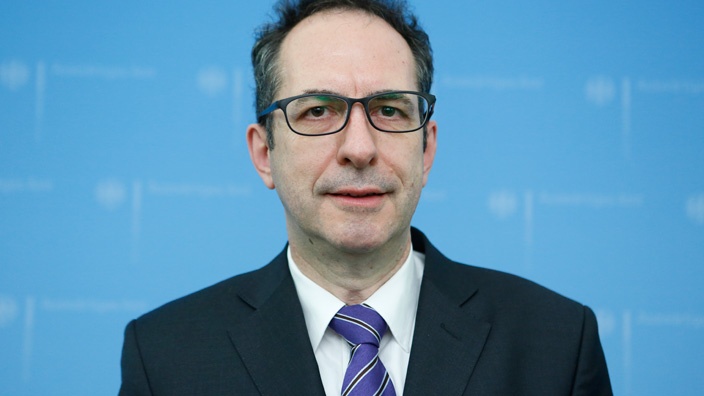 Dr Riedel, you have been Commissioner for International Cyber Policy since  August 2014. What exactly does inter­national cyber policy involve?

International cyber policy is an interdepartmental responsibility that has con­sequences for almost all areas of policy and action in international relations. Protecting cyberspace while simultaneously preserving the freedom of the Internet has become a major challenge at the  international level. A balance must be found here between the needs of freedom, security and business. The Federal Government’s international cyber policy aims to coordinate and promote German interests and ideas in a targeted way in international organisations – for example, the United Nations, the OSCE, the Council of Europe, the OECD and  NATO.

Can you give us some insight into your work?

As Commissioner for International Cyber Policy I am part of the senior management of the Federal Foreign Office and am accountable directly to the Federal Foreign Minister and the State Secretaries. I often act as the face of the Federal Foreign Office when questions of international cyber  policy are involved.  I am also the contact person for foreign governments, for international organisations, for companies and representatives of civil society – for all stake­holders, as people in the cyber community say. I want to introduce cyber aspects into all facets of German foreign policy. It is not meant to be a “subsidiary foreign policy” in cyberspace!

It seems clear that the subject of digit­isation can only be approached in a crossborder dialogue with the most  diverse actors from government, non-governmental organisations, industry and research. How intensely is this dialogue already taking place? And what impetus is coming from Germany?

This dialogue – with all interested parties and across borders – forms the basis of my activity. You could gain the impression that there are almost too many forums, con­ferences, webinars, consultations, round tables and so on, and so on… Unlike in traditional diplomacy, where government representatives sit face to face, I have dealings with a large number of different actors in the most diverse formats. Inside Germany we conduct a regular exchange of views with “our” Internet community and regularly ask for input and feedback. At the same time, we report on inter­national conferences and our efforts – for example, in the Freedom Online Coalition, in preparing for the Internet Governance Forum or with regard to advances in the implementation of the Digital Agenda. The protection of privacy is seen as a major freedom in Germany. The NSA surveillance affair has led many to doubt whether this right is really upheld.

How can privacy be better protected on the Internet? And what can inter­national cyber policy achieve here?

At the end of 2013 the General Assembly of the United Nations unanimously passed a resolution on the right  to privacy in the digital age. It was based  on a German-Brazilian initiative. A follow-up resolution that takes up findings from various reports of the last year is currently being negotiated in New York. Germany is campaigning very emphat­ically to protect and strengthen this right. After all, we believe that democracy requires freedom, and freedom requires a space without government surveillance. As Federal Foreign Minister Steinmeier put it, it is a matter of finding a balance between freedom and security. We should compile an honest cost-benefit analysis about the amount of privacy we are  prepared to pay for improvements in security. The relationship between costs and benefits must be sensible and appropriate.

Could data protection and effective IT security technology offer economic competitive advantages? How well placed do you believe Germany is here?

Yes, I do see a potential competitive advantage for the German IT industry. Our support for data protection and privacy strengthens the trust that many people have in us all over the world. However, Federal Foreign Minister Steinmeier has also pointed out that the strength of German industry lies in the traditional sector. Others lead in the IT industry – above all, in the United States. We must bring both  of these together – and that is what we  understand by Industry 4.0.

The subject of human rights is also an important field of activity for inter­national cyber policy. How, in concrete terms, is Germany involved here?

I already mentioned the United Nations General Assembly resolution on the right to privacy. We are currently working  on the introduction of a permanent mechanism at the United Nations Human Rights Council in Geneva that will monitor this subject. However, that is only  one aspect: we take every opportunity to protect human rights, also in the digital age. Special emphasis should be placed here on the right to access information and on freedom of speech and freedom of expression. Fundamentally, human rights apply just as much online as they do offline. Incidentally, we receive advice here from import­ant civil society actors in the Round Table on Cyber and Human Rights, and we maintain close contacts within the framework of the Freedom Online Coalition as well as other regional and international forums.

In your opinion, is the need for action here viewed with similar importance in other countries as it is in Germany?

More and more countries are becoming active in this area. Incidentally, Estonia is one of the pioneers, and the chair of the Freedom Online Coalition is currently held by Mongolia. In other words, we are not discussing a subject that only affects the “major players”! We cooperate closely with our partners in the European Union and in the USA – despite a number of  differences of opinion. However, new  actors are coming to the fore in inter­national cyber policy: Brazil is an opinion leader in the global South, India has the potential to play a significant role and  Israel is a heavyweight in the field of  cyber security.

Federal Foreign Minister Frank-Walter Steinmeier said that a major goal of the 21st century is to create “a free, open and secure Internet”. Are you optimistic that a successful balance can be found in the foreseeable future between cyber security and the freedom of the Internet?