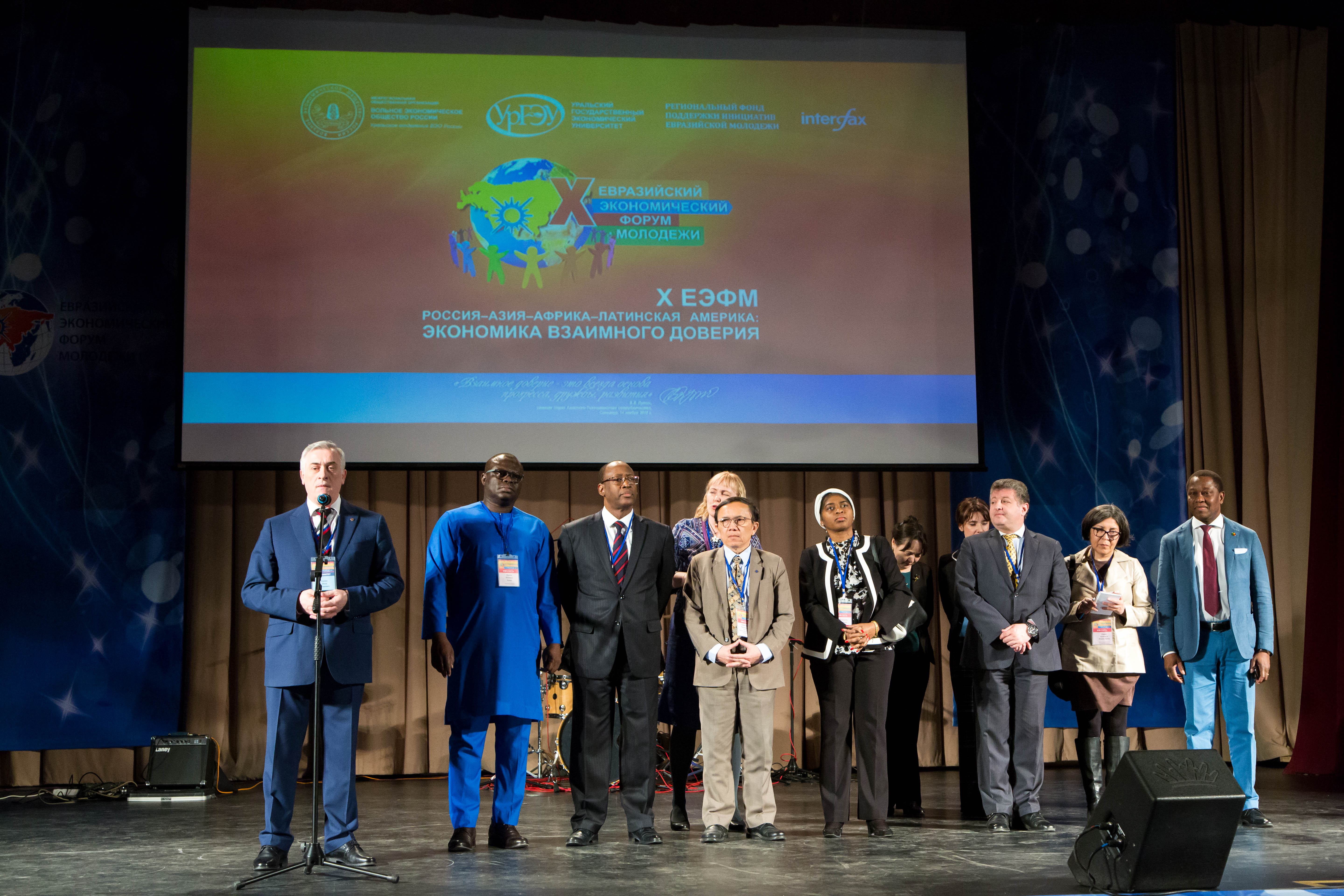 en.usue.ru; article contains additional photographs
The Tenth Eurasian Economic Youth Forum (Forum) was held at the Ural State Economic University (Yekaterinburg) on April 16-18, 2019. The subject of the Forum was chosen as "Russia – Asia – Africa – Latin America: the economy of mutual trust."The key mission of the Forum was to strengthen trust between countries, expand cooperation in education, culture, science and technology, and remove barriers to communication between people. Among the main goals and objectives of the Forum are discussions of topical issues of international cooperation, intergovernmental dialogues in the fields of education, science and culture; building a constructive dialogue of the expert community on the development of scientific diplomacy, building a global model of the functioning of modern science and education.

The Forum was attended by more than 3,500 delegates from 72 countries and 70 regions of the Russian Federation, officials from 15 diplomatic missions of foreign countries in the Russian Federation, representatives of ministries and departments; Consuls General of 18 states in Yekaterinburg; Mr. Korotkov, Director of the Center for International Industrial Cooperation of UNIDO in the Russian Federation; Mr. Kuznetsov, Director of the UN Information Center in Moscow; Mrs. Maslakova-Clauberg, Head of the Center for Public Diplomacy, Dialogue of World Cultures and Religions of the Diplomatic Academy of the Russian Ministry of Foreign Affairs; Mrs. Zakaurtseva, Vice-Rector of the Diplomatic Academy of the Ministry of Foreign Affairs of Russia; representatives of the executive and legislative authorities of the Sverdlovsk region, local governments of the Sverdlovsk region, representatives of 126 universities from around the world (69 of them are universities in Asia, Africa, Latin America, the Middle East and 57 universities in Russia), 356 experts, more than 500 schoolchildren, business and community organizations.

The International Diplomatic Forum on the topic “Public diplomacy as a form of dialogue and trust in modern international relations”, was held for the first time as part of the Forum and united 11 Ambassadors Extraordinary and Plenipotentiary from Asia, Africa and Latin America. The event was supported by the Foreign Ministry Academy of Russia. The international diplomatic forum was held in an atmosphere of friendship and mutual understanding. The guests reaffirmed their desire to strengthen cooperation between the Forum's international participants in various fields, and also stressed the role of the 10th Eurasian Youth Economic Forum as an important tool for expanding cooperation between the states. The meeting participants agreed to do their best and to ise [sic] communication opportunities of the Forum more actively. A general meeting of the Ural Branch of the Free Economic Society of Russia was held during the Forum and was attended by 64 delegates.During the Forum's work the following events were held: 5 congresses ( a congress of economists, innovators, financiers, service technologies, schoolchildren); 30 contests; Academic competition; public lectures by leading international and domestic diplomats, academics and business practitioners.

The Forum also provided video conferences with experts from Israel, Russia and Kazakhstan who highlighted some important aspects of the health care system. Forum's expositions were presented on the interactive platforms.The Grand Nutcracker and the Ural Belt rope pulling championship chess tournament took place at the Forum site. At the end of the Forum, participants adopted the Final Resolution.The next Eurasian Youth Economic Forum will be held at the Ural State University of Economics in Yekaterinburg in April 2020.
Original Article