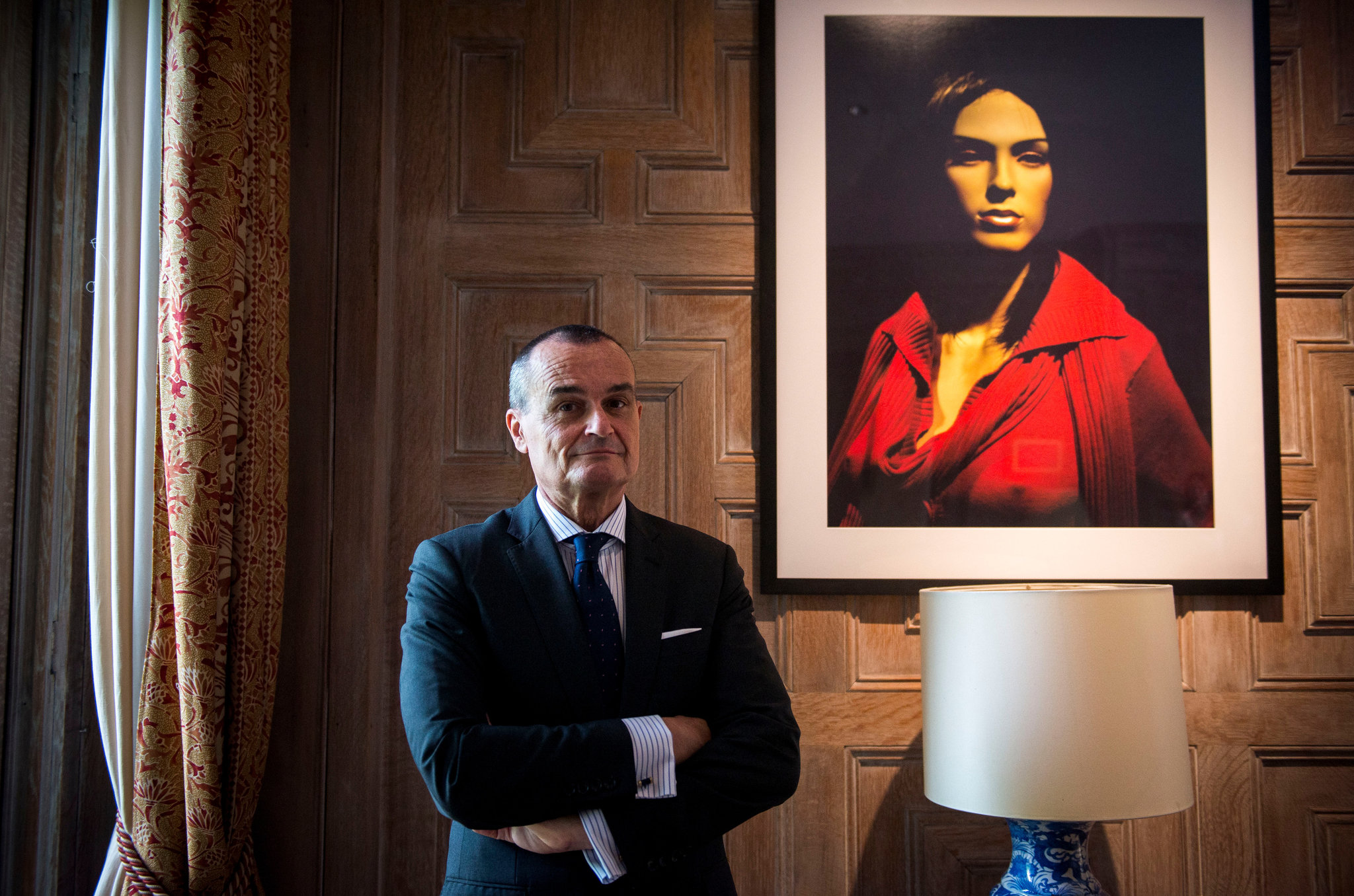 I’M a little worried about the French ambassador.

Sure, he’s good-looking and charming and popular and lives in the most romantic chateau in town.

But I fear that he’s one glass of silky Beaujolais and one tart tweet away from blowing up his life.

At 62, after a distinguished career in the French Foreign Ministry, including turns as France’s ambassador to Israel and to the U.N., the very correct Gérard Araud is throwing caution to the winds.

“I’m taking the risk, in a sense, but it’s my last posting and I’m at the highest level of the ministry, so I can afford taking risk,” he mused, looking beautifully tailored in charcoal J. Crew and onyx cufflinks from his partner, talking over a breakfast of steamed eggs with duck prosciutto and truffles at his residence.

He has not only shrugged off concerns about the stuffy French Foreign Ministry to break decades of reticence on the topic of his sexuality — acknowledging his role as the first French gay ambassador to Washington, trumpeting his support for gay marriage and revealing that his longtime partner, a photographer named Pascal Blondeau, has moved into the official French residence.

More striking, he has invented a new form of digital diplomacy for our cacophonous, hyperconnected age, a zesty undiplomatic diplomacy that has shaken up this staid marble capital.

In the Middle Ages, Charlemagne’s envoys to the Vatican had to memorize their messages in Latin and then recite them to the pope. Now, @GerardAraud can just zip off 140 characters to @Pontifex.

Hierarchy and politesse be damned. Gérard Arnaud is the first great ambassador of the social media era. If Twitter is the digital French Revolution, full of raucous democracy and gleeful beheadings, then the French ambassador has defected to the “Aux les Barricades” camp.

“If I was the ambassador to the U.S. repeating every day how much Lafayette was great and how much the friendship between the two countries is exciting, I’m not sure it would be of any use,” Araud said. “So the diplomat has to be more personal, which is also, in a sense, more dangerous. There is such a noise in terms of information flowing that to be heard, in a sense, you have to shout a bit.”

He noted wryly, “I have a sort of big mouth, I guess.”

“I was an outsider socially at first because I come from the lower middle class from a provincial city and not Parisian at all, in a profession in which Parisians have a huge presence,” said the Marseille native. “And also because I’m gay, so I’ve always felt that I was not totally in a mold.”

Araud said he was so “stunned and hurt” at the fierce backlash at home to France’s marriage equality law, even from his best friend, that it transformed him into a “militant.”

Araud was such a star in his job at the U.N. that the Foreign Ministry asked him to start tweeting. He famously texted his fellow U.N. ambassador, Samantha Power: “On behalf of the French mission, I have to tell you: you are beautiful.” She is now a close friend.

“I did it on my own without rules, no explanation really how to do it,” he said. He uses his year-old Twitter feed for “propaganda” — retweeting luscious shots of French pastries and landscapes — and correcting “French bashing.”

“Basically, for the French, Americans are dying in the street because they don’t have a social safety net,” he said. “And basically, for the Americans, France is a sort of chaotic, socialist country. Actually, it’s partly true on both sides.”

He also sends out more “human” tweets, praising Ireland’s vote on marriage equality and sharing his favorite strips from “Calvin and Hobbes,” a cartoon he calls “metaphysical.”

And then there are the vinegary tweets that have put Foggy Bottom in a swivet. Araud, a key player in the 2003 birth of the Britain-German-French initiative to curb Iran’s nuclear program, has been cautioning the U.S. not to rush, after 12 years of negotiating, to make a bad deal with Iran.

“Iran,” he tweeted in March. “We want a deal. They need a deal. The tactics and the result of the negotiation should reflect this asymmetry.”

You’d think, after our “Freedom Fries” silliness, when we didn’t listen to France about the folly of an Iraq invasion, we would heed a warning on Iran, a country with a talent for cheating.

But John Kerry was angry at Araud’s bluntness. Still, the ambassador doubled down at a recent panel at the Atlantic Council think tank, asserting that there had been too much focus on Iran’s “chest-banging” and demands at the start of the negotations, and predicting: “It’s very likely that we don’t have an agreement before the end of June, or even after June.” That made news and drew a rebuke from the State Department’s lead negotiator.

“Wendy Sherman called me, and she was livid. ‘Gérard, what do you say?’ ” Araud told me, with a charming smirk. He sent out a dutiful tweet, clarifying that he simply meant that the Iranians would wait until the last minute, as they have done before.

He chides people for too often seeing Iran only as “a sort of terrorist monster plotting to destroy Israel, while I think it’s much more relevant to see Iran as a great power with its national interest, its vision, its ambitions, moving forward in a very logical way because there is a vacuum.” ISIS, too, he said, was logically taking advantage of a vacuum because the Sunnis now “feel totally exposed and unprotected.”

Nowadays, “ambassadors don’t have access” to the White House, so he can only hope the newly tweeting president is reading his darts. Even though he still finds President Obama “a mystery,” he said “for us, he was a second messiah. After George W., it was easy.”

Araud finds Washington “provincial,” with early-bird dinners at 6:30 p.m. where he complains that he is “the youngest,” and with “sad” men’s suits where “their pants are much too large, the crotch is coming down, they have no imagination in the colors.” And out of the office is “awful; they take the first jeans they find. They don’t care.”

He loves America but doesn’t hesitate to tweet-tweak our noses.

He has tweeted that the invasion of Iraq was “an unmitigated disaster.” He brusquely reminded the Atlantic Council audience that it was the invasion that allowed Iran to gain influence because “Iraq has played a major role as a sort of dam against Persian ambitions for 1,000 years.”

He bristled at the same burr that has irritated Europe for centuries: American attempts to cloak power plays in piety. “I’m going to tell you, to your utter disbelief, a secret: The French foreign policy is neither more nor less moral and intelligent than the U.S. one,” and European businessmen are not more or less greedy.

In mid-May, he slyly tweeted: “I know it is hard to say, but: ‘Yes, invading Iraq was a mistake. Yes, the French were right.’ Once you say it, you feel relieved.”

As a bust of Ben Franklin benevolently looked on, Araud chafed at American exceptionalism: “You are the Jerusalem on the Hill, and if everyone adopts your institutions or your way of life the world will be transformed.”

He added that America doesn’t look back. “I guess for the U.S., it’s an incredible strength because we are burdened by the past,” he said. “We are, really. Why are you not?”

As I leave, I ask if De Gaulle would have tweeted.

“No,” Araud replied. “He believed that power needs mystery.”