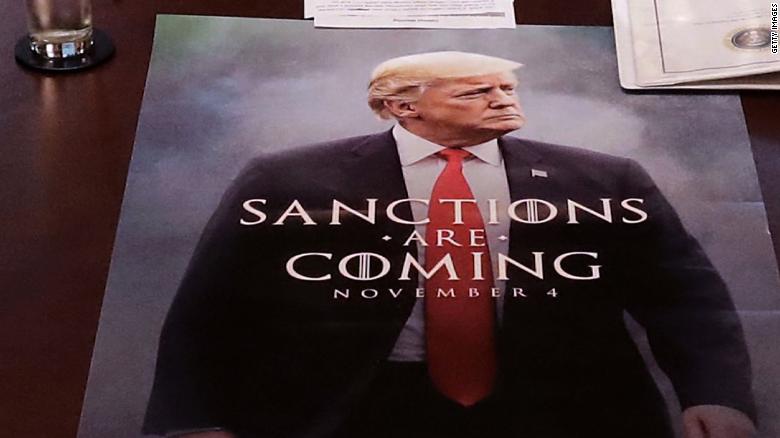 The tweet was the idea of political appointees at State, but many career diplomats were appalled and uncomfortable. As the rhetoric against Tehran continues to be ratcheted up, there’s a divide within the State Department between political officials who want to keep pushing the envelope and career diplomats who argue the strategy is counterproductive and “useless.”
Using digital platforms to condemn the Tehran regime has become a defining characteristic of the Trump administration’s Iran policy. 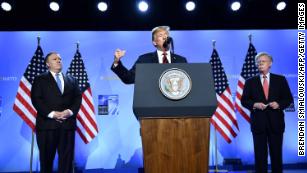 What’s the Trump Doctrine? Depends who you ask
In the last couple of weeks a top political State Department official tweeted a mocking GIF of Iranian Foreign Minister Mohammad Javad Zarif calling him a liar, national security adviser John Bolton pronounced that he did not think Iran’s regime will have any more anniversaries in an official White House video and the State Department distributed a video of what was once the Iranian Embassy in DC, which has now been shuttered for almost 40 years.
Trump’s “Sanctions are coming” tweet certainly caught the world’s attention and grabbed headlines. The President was so taken with the image that the poster was on the table in front of him during the first Cabinet meeting of the new year.
Career diplomats had heard about the idea of the original tweet from political leadership at the State Department. They claimed an edgy preview of the big show — US sanctions against entities doing business with Iran, months after the US exited the Iran nuclear deal — would grab people’s attention. Initially, the career officials had said no, arguing it diluted the seriousness of the policy. The poster appeared “more silly than anything else,” explained a career diplomat.
But the political appointees sent it to the White House. If State wouldn’t use it, maybe the President would. It worked and Trump loved it, explained administration officials.
The poster crystallized the contentious divide between career diplomats at the State Department and Trump’s political appointees when it comes to messaging on Iran.

‘We need something that jars people out of their complacency’

“If nobody is listening, it is useless,” explained a political appointee at the State Department. “We need something that jars people out of their complacency. If we can’t get people’s attention, then we are not communicating our policy. And we are certainly not going to get their attention if we bore them to death.”
The “Game of Thrones” poster was considered particularly successful in the eyes of the Trump administration because it broke through during the midterm elections, to a domestic US audience. The fear from career diplomats is that the shock-factor-driven digital approach is not actually bolstering the administration’s policy. They see it as diluting very serious policy. 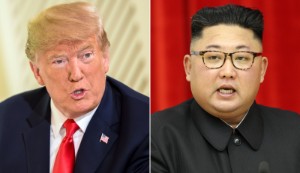 Trump admin weighs softening demands ahead of second North Korea summit
“I don’t see how it is effective. I worry that it will, in the end, detract from what we have said is the policy: We want to increase pressure on the Iranian regime to get an all-comprehensive deal,” explained a State Department official who has worked on Iran during this administration. “These ideas seem to be speaking more to a domestic audience, and that is not going to move the needle on Iran’s calculus on if they will work with us on a new deal.”
A State Department spokesperson pushed back against the criticism. “The State Department’s media strategy on Iran supports the Trump administration’s overall strategy, which is to impose maximum pressure on the Iranian regime so that it changes its malign behavior while supporting the Iranian people,” the spokesperson told CNN.
The Trump administration has stressed that it is seeking to use digital content to reach the Iranian people. US Special Representative to Iran Brian Hook has taken questions from Farsi speakers online. And the recent video that he recorded in front of the former Iranian Embassy in Washington caught the attention of Iranians online — with more than 130,000 total views in less than 48 hours on the State Department’s Twitter account.
It was the content of Hook’s video, however, that raised alarm among some diplomats. His message seemed at odds with the administration’s repeated claim that it is not pressing for regime change in Iran. Hook said the US wanted to turn over the embassy’s keys to a “truly representative Iranian government.”

Similar language has been used in other digital content targeting Iran. Earlier this month the White House tweeted a video of Bolton addressed to Ayatollah Ali Khamenei warning, “I don’t think you will have many more anniversaries to enjoy.” Still, the administration claims it does not want to evoke regime change, it just wants to support the Iranian people.
Ahead of last week’s US-sponsored Warsaw Middle East Summit — which focused in large part on Iran’s threatening activity in the region — the hashtag #WeSupportPolandSummit trended in Iran. However, some studies of the hashtag, such as one conducted by Geoff Golberg, who is the co-founder of a blockchain index, suggested it was driven in large part by bots. 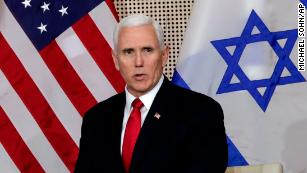 Trump admin pushes for tougher action on Iran, swipes at Europe
State Departments officials claimed that happened organically and said it was not “purely” a bot-driven activity, and the traction in Iran showed that the Iranian people are supportive of the administration’s approach.
Yet the Iran digital strategy — flooding the zone with anti-Iran messaging — has also confused citizens in countries that are US allies.
The way the administration has used Facebook to post anti-Iranian messages is another departure from the traditional use of that platform by the State Department. The Trump administration posted notices about US Iran sanctions on the Facebook pages of US embassies around the world in November — primarily in the Middle East. The Facebook pages have historically been used as forums to draw attention to US educational programs in the country or cross-cultural events, rather than sanctions rollouts. The posts provoked an angry response and career diplomats took notice.
In some cases the political appointees’ brainstorms for digital content and messaging have gone so far overboard that they have been shut down completely.
Last year one of the political appointees called up the Iran desk with an idea to find a Persian bakery in Washington, have it make rocket-shaped cookies and send them to all the countries within missile-launching range of Iran. The idea was rejected before it turned into anything, but State Department diplomats tell CNN they have had to shut down many similar ideas.
Tweets from the personal accounts of political appointees have also made many career diplomats uncomfortable.
Len Khodorkovsky, a deputy assistant secretary and a former advertising executive, tweeted a GIF of Foreign Minister Zarif earlier this week. “How do you know @JZarif is lying? His lips are moving,” Khodorkovsky wrote.
Former State Department officials were shocked. John Kirby, a CNN national security analyst who was a State Department spokesperson during the Obama administration, said using social media for snarky comments “cheapens” diplomacy and would not have been accepted during the Obama administration.
“If I had posted something about him like this on social media, Secretary Kerry would have — rightly — been incensed. I might even have been fired,” said Kirby.
Khodorkovsky defended his tweet.
“My account — which is a personal account, where I say my personal take on anything from government-related to news-related topics — is my specific point of view. But it is also consistent with our policy of pointing out the Iranian regime’s excesses and misrepresentations and malign activities,” Khodorkovsky told CNN. “It is completely in line with our policy of maximum pressure.”
https://edition.cnn.com/2019/02/23/politics/trump-administration-social-media-iran/index.html
Please follow and like us: 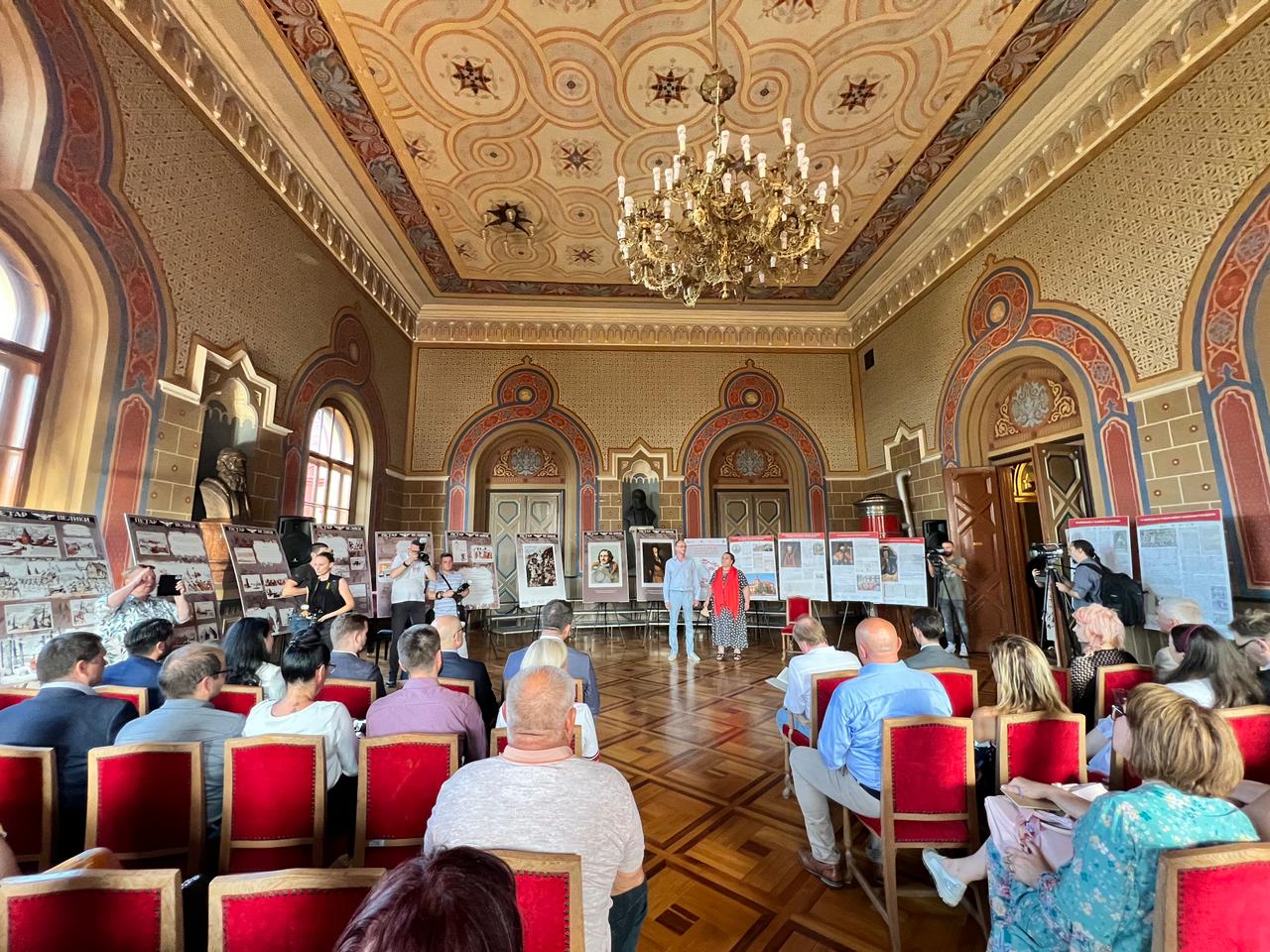