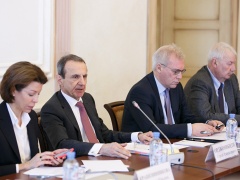 On April 3, in the run-up of the 70th anniversary of NATO, the Russian Public Council for International Cooperation and Public Diplomacy held a round table discussion at the Civic Chamber of the Russian Federation where experts discussed the possibility of easing tensions between Russia and NATO.
“The history of relations between our country and NATO has shown that NATO has kept its orientation against our country, which at some point was anti-Soviet, and has now become anti-Russian, and increasingly more so,” Council Chair and Deputy Secretary of the Civic Chamber Sergei Ordzhonikidze said. “This position remains unchanged regardless of the type of government in Russia. NATO has always regarded the Soviet Union and the Russian Federation as the number one geopolitical enemy,” he went on to say, adding that NATO can exist only in a cold war context.

He explained that NATO’s preposterous deterrence policy is clearly a cover for its aggressive designs, and its policy can hardly be called defensive, especially given the bloc’s “creeping expansion” to the East.

“More and more often, we are seeing NATO ships enter the Black Sea almost on a regular basis,” he said. “Clearly, their goal is to reach the Sea of Azov and confront us with the fact that our country is surrounded from the south. Our question to NATO, whether these ships carry nuclear warheads, has gone unanswered.”
Sergei Ordzhonikidze noted that if there are missiles on these ships, “they can reach Moscow as well.”
Deputy Foreign Minister Alexander Grushko spoke in detail about Russia’s position regarding NATO actions, relations between the alliance and our country over the past 70 years, and the security architecture of today’s Europe. He said that NATO’s weapons programs are not in fact designed to combat terrorism, but are being built according to the Cold War paradigm.
“We will respond, Moscow’s actions will be symmetrical, but not costly,” Grushko said speaking of Russia’s response to new NATO weapons programs in Europe.
Alexander Grushko noted that military planning that is hostile to Russia will give rise to hostile policies.
“This mix of military planning and hostile policies is a cocktail that will be difficult to leave in the past,” he added.

Russia’s chief military representative to NATO in 2002-2008, Vice-Admiral Valentin Kuznetsov, said that the peak of cooperation between Russia and NATO occurred in these years. However, in 2008, NATO unilaterally suspended the work of the Russia-NATO Council thus putting an end to this cooperation. According to him, the number of NATO rapid-response forces near the borders of Russia has increased from 25,000 to 40,000 troops over the past two years.
“By 2020, they should realize their Four 30s plan which is the deployment of 30 mechanized infantry battalions, 30 squadrons of aircraft and 30 warships within 30 days. This will also be part of the so-called rapid reaction force,” he added.
Lt.-General (retired), former Deputy Head of the Defense Ministry’s Main Directorate of International Military Cooperation and Chairman of the PIR Center Council Yevgeny Buzhinsky noted that NATO is primarily the United States, and all the decisions are made by the Americans.
“Of course, there will be no “Fort Trump” in Poland which is widely discussed now, but the infrastructure like in Norway could possibly be created in the Baltics (heavy equipment depots). The recent redeployment of 1,500 troops from a tank division to Poland is only the beginning,” he said, adding that the Americans are clearly renewing their system for transferring reinforcement troops to Europe.

Veronika Krasheninnikova, Deputy Chair of the Civic Chamber Commission on Public Diplomacy, Humanitarian Cooperation and Maintenance of Traditional Values, also spoke about the need to focus on Eastern Europe, primarily, Poland.
She spoke about the Interseas concept, which has become particularly important during the past decade.
“The Stratfor Institute began to use this concept, followed by US army generals. The point of the concept is that all the land between the Baltic Sea and the Black Sea must be under Poland’s influence, if not control,” she said.
“It appears that the transatlantic axis is shifting from Old Europe to New Europe,” Krasheninnikova said. “These are the terms introduced by US Secretary of Defense Donald Rumsfeld in the early 2000s.”
She explained that this is of critical importance for Russia, since Eastern Europe is closer to Russia’s borders than Western Europe.
“The atmosphere of militarization is becoming tenser. It appears that the center of gravity of the NATO military-political bloc will continue to shift to Eastern Europe,” she concluded.Original Article

NATO at 70: a journey of our history and public diplomacy