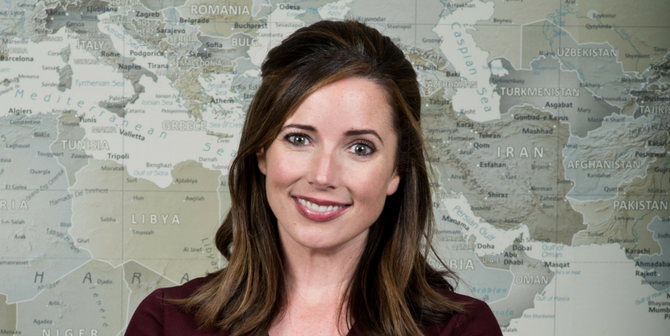 FOR IMMEDIATE RELEASEKatherine Brown, Ph.D., former Executive Director of the U.S. Advisory Commission on Public Diplomacy [JB emphasis], to lead Global Ties, the largest and oldest citizen diplomacy network in the United States.WASHINGTON, DC—Global Ties U.S., a nonprofit that makes international exchange programs more effective by fostering deep connections between current and future leaders, announced today Katherine Brown, Ph.D., as the organization's incoming President and CEO, effective April 9, 2018.Katherine brings a wealth of experience from the media, nonprofit, and academic sectors, as well as the U.S. government. She is highly regarded in the international affairs and public diplomacy arena as a strategic, forward-thinking leader.
Jacquelyn G. Shipe, Chair of the Global Ties U.S. Board of Directors, affirmed, "Katherine is uniquely positioned to continue moving Global Ties U.S. and the Global Ties Network forward on the path of impact, growth, and sustainability. Her leadership will strengthen our member organizations, programs, and services, while making the case to increase investment in our global engagement efforts."
From 2013-2016, Katherine Brown served as Executive Director of the United States Advisory Commission on Public Diplomacy, a body authorized by Congress to oversee and promote U.S. government activities that intend to understand, inform, and influence foreign publics. Most recently, she has been a Public Policy Manager at Facebook, Inc. where she was also in residence as a Council on Foreign Relations International Affairs Fellow.
Previously, she held numerous roles in government, including assistant to the White House national security adviser; communications adviser for the U.S. Embassy in Kabul; and professional staff member of the Committee on Foreign Affairs at the U.S. House of Representatives.
Katherine also served on the boards of the Center on Public Diplomacy at the University of Southern California and the Global Ties Foundation. She is a non-resident senior associate at the Center for Strategic and International Studies and an adjunct assistant professor at Georgetown University. She received her Ph.D. and M.A. in communications from Columbia University and B.A. from the George Washington University.
"Katherine's understanding of the intersection of global communications, government, and national security adds tremendous gravitas to the mission of the Foundation that seeks to bring innovation to international exchanges and public diplomacy efforts. Her passion and experience for our organization's shared vision—a peaceful, prosperous world where individuals build enduring relationships through international exchange—will serve as a powerful platform that will carry our work to great heights," said Kyle Moyer, Chair of the Board of Directors of the Global Ties Foundation and former Chair of the Global Ties U.S. Board.
The Board of Directors deeply appreciates the commitment and leadership of the members of the Executive Search Committee, led by Peggy Parfenoff, President of WorldChicago and member of the Global Ties U.S. Board of Directors, for managing a comprehensive and competitive search over the past several months.
Additionally, the Board acknowledges the work of Daniel Valle, Chief Operating Officer, for his stewardship, as well as the Global Ties U.S. staff for their dedication to the organization during this period of transition.
The leadership and staff of Global Ties U.S. look forward to working in close partnership with Katherine to further the organization's vision while promoting and strengthening the individuals and organizations that comprise the Global Ties Network.
As President and CEO of Global Ties U.S., Katherine Brown will also serve as the President and CEO of the Global Ties Foundation.

Global Ties U.S. is a nonprofit that makes international exchange programs more effective. We work with our members and the U.S. Department of State to bring current and future leaders from around the world to communities across the United States. Together, we build deep connections among people from many countries, resulting in a more peaceful, prosperous world.
The Global Ties Foundation is the charitable arm of Global Ties U.S. It seeks to empower a network of global influencers by accelerating innovation in international exchange.
###
Contact:
Daniel Bremer-Wirtig
Director, External Affairs
Global Ties U.S.
dbremer@globaltiesus.org
Mobile: 202.494.2383