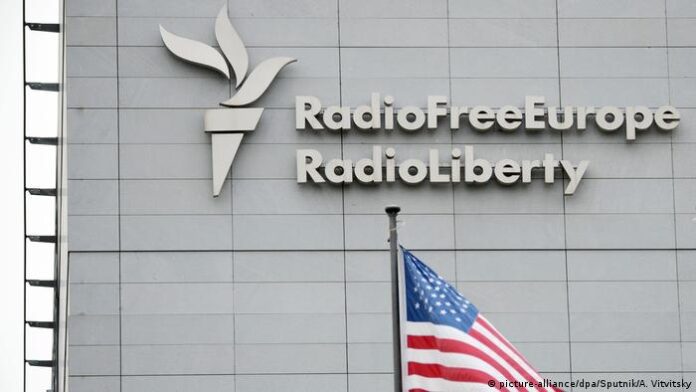 Radio Free Europe first began transmitting from its headquarters in Munich, West Germany, on July 4, 1950, to Czechoslovakia. Soon it was transmitting to most of the Soviet-dominated countries and in 15 languages. The station was funded by the U.S. Congress through the Central Intelligence Agency (CIA). However, CIA involvement was kept secret until the late 1960s for fear of Soviet retaliation.

During the Cold War, communist governments attempted to prevent information broadcast by RFE/RL from reaching listeners in their countries. They routinely jammed the radio signal or created interference by broadcasting noise over the same frequency. In addition, some RFE/RL staffers died under mysterious circumstances, the most famous being Bulgarian writer Georgi Markov, who died in London in 1978 after being stabbed with an umbrella that inserted a poisonous ricin-laced platinum pellet into his leg. RFE/RL headquarters in Munich was bombed in 1981 by terrorists underwritten by the Romanian government and headed by Venezuelan militant Carlos the Jackal.

Following the end of the Cold War in 1989, the role of RFE/RL changed in many of its target countries. The station was officially allowed to operate in most of the states it broadcasts to, with the exception of Belarus, Turkmenistan, Tajikistan, and Iran. In 1995 its headquarters moved to Prague. With developments in the Middle East capturing American attention throughout the 1990s, RFE/RL initiated a program to reach out to the people in Iraq and Iran, and the first broadcasts to those countries began in 1998.

By the early 21st century RFE/RL had bureaus throughout eastern Europe, the former Soviet republics, and the Middle East producing radio, television, and Internet content in roughly 20 countries and in approximately 30 different languages, including lesser-known tongues such as Bashkir, Circassian, Tatar, and Chechen (all spoken in the Russian Federation). It does not broadcast in English at all, and 19 of the languages in which it broadcasts are spoken by Muslim communities ranging from Kosovo (in the Balkans) to Pakistan (in South Asia). After an absence of more than a decade, RFE/RL restarted its Dari and Pashto language broadcasts to Afghanistan in 2002. By 2010 RFE/RL programming broadcast in various Pashto dialects reached the tribal areas along the Afghanistan-Pakistan border. In addition to providing its listeners, viewers, and readers with local news and information, RFE/RL aims to assist countries that are in transition in developing their civil societies (including the media) and guarding against the resumption of totalitarian rule.