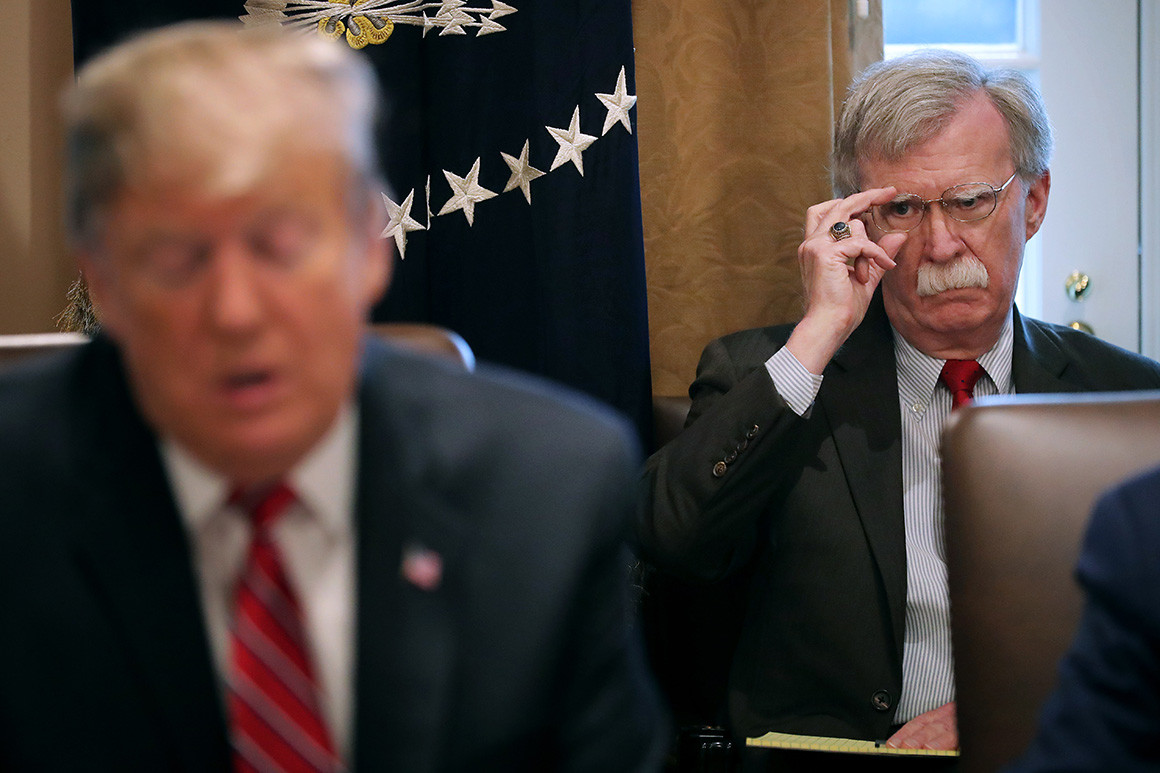 Image from article, with caption:John Bolton’s tweets have taken on a Trumpian quality, liberally incorporating exhortations and exclamation points. Chip Somodevilla/Getty Images
He is the unlikeliest social media star of the Trump administration.
At 70 years old, and in one of Washington’s most sensitive jobs, national security adviser John Bolton has started tweeting with the frequency, and often the passion, of his boss.
Trump’s third national security adviser is using Twitter far more often, and more colorfully, than any of his predecessors — making policy pronouncements and lambasting perceived bad guys. His targets range widely, from the Cuban government to Vladimir Putin’s Russia to the “failing” New York Times.
In recent weeks, he has trained his fire on the embattled socialist regime of Venezuela’s Nicolas Maduro. On a single day in February, Bolton tapped out seven tweets, several of them directed at Maduro and his allies, warning them to relinquish power. “It’s time for Maduro to get out of the way,” he wrote.
Under the handle @ambJohnBolton, he has offered Venezuelan generals a serious invitation to defect and snarked at the county’s defiant ruler: “I wish Nicolas Maduro and his top advisers a long, quiet retirement, living on a nice beach somewhere far from Venezuela,” he wrote in late January. Many of the tweets have appeared in Spanish, in an effort to communicate directly with the Venezuelan military leaders who are propping up the Maduro regime.
View image on Twitter

John Bolton
✔@AmbJohnBolton
Once again, the people of Venezuela have taken to the streets in support of a peaceful democratic transition to Interim President Juan Guaido. It is time for the Venezuelan military high command to stand alongside its people, not with Maduro’s Cuban patrons.
12.5K8:55 PM – Feb 12, 2019

7,033 people are talking about this
It’s a striking departure from the norm, given that national security advisers have traditionally stayed mostly out of public view, offering their opinions to presidents behind closed doors. But it is in keeping with the reputation Bolton — a former State Department official and one-time ambassador to the United Nations — has developed as one of America’s bluntest diplomats.
At times, Bolton’s tweets have even taken on a Trumpian quality, liberally incorporating exhortations and exclamation points. “The U.S. will consider sanctions off-ramps for any Venezuelan senior military officer that stands for democracy and recognizes the constitutional government of President Juan Guaido,” Bolton tweeted last week. “If not, the international financial circle will be closed off completely. Make the right choice!”
On Monday, he even recorded a short video, tweeted out by the White House’s official account, sending a menacing message to Iran’s Supreme Leader on the 40th anniversary of the country’s Islamic revolution.
“I don’t think you’ll have any more anniversaries to enjoy,” Bolton declares in the video.

The White House
✔@WhiteHouse
A message to the Ayatollah of Iran: “For all your boasts, for all your threats to the life of the American President, YOU are responsible for terrorizing your own people.” #40YearsofFailure
26.8K3:44 PM – Feb 11, 2019

13.4K people are talking about this
Bolton’s associates say that, much like the president, he views Twitter as a means of circumventing traditional media to reach people directly — be they Venezuelan military officers or American Trump supporters. The White House has all but eliminated the daily press briefing. And Trump himself has said — on Twitter, of course — that he told his press secretary, Sarah Huckabee Sanders, “not to bother” conducting briefings anymore because “the word gets out anyway,” largely through Trump’s own Twitter feed.
Bolton is taking a page from that playbook, using the platform, on Venezuela in particular, to hammer home a message — sometimes several times a day. Over the past week alone, he has warned that “the lights are going off on the Maduro mafia in Venezuela,” reminded the regime that “all options are on the table,” argued that “there are no good faith negotiations with Maduro and his cronies,” and announced that the U.S. “will continue to use all tools to separate Maduro and his cronies from money that rightfully belongs to the people of Venezuela.”
His Twitter usage has won some unlikely admirers, including Richard Stengel, a former undersecretary of State for public diplomacy [JB emphasis] and public affairs in the Obama administration.
“As the guy who tried to get everyone at State on Twitter, I actually think tweeting can be an effective way of reinforcing and projecting policy,” Stengel said, “and that seems to be the way he’s using it.”

By LILI BAYER and DANIEL LIPPMAN
Bolton isn’t the only top Trump official to sharpen his social media skills in the service of a president who closely monitors television, including the coverage his own tweets receive on the air.
Bolton’s active tweeting is a stark contrast to the low profiles of his predecessors. Trump’s previous national security adviser, H.R. McMaster, who was fired last year, didn’t even have a personal Twitter account. Michael Flynn, who preceded McMaster, was not an active Twitter user during his short tenure.
While President Barack Obama’s last national security adviser, Susan Rice, was a regular tweeter, she mostly disseminated NSC statements, links to the White House blog, and other standard updates on her activity.
“Told assembled Truman Scholars what has been undeniably true for me,” she wrote in a typical dispatch in June of 2016, “public service is the highest, most rewarding calling.”
Original Article