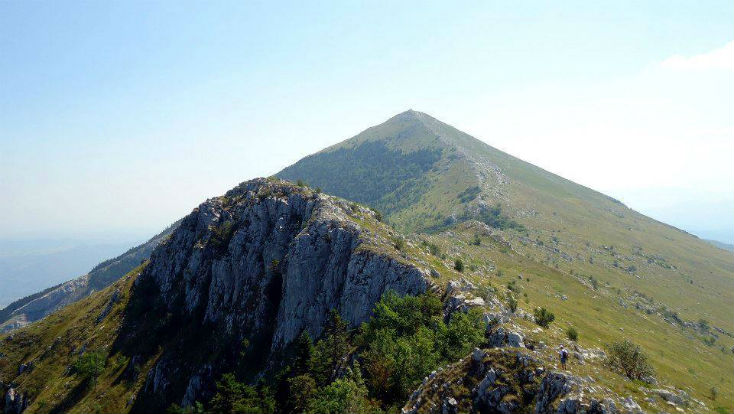 Legends about this mountain from whose top the confluence of the Sava river into the Danube can be seen, rumors about the hidden treasure, secrets about aliens and fiery spheres flying over it, stories about the positive enegry it emits, but also the amazing beauty, size, perfect geometrical shape and the healing herbs which grow only here, make Rtanj a mysterious place whose secrets haven’t been discovered yet.

The mysterious veil which looms over Rtanj is still the reason for many scientific arguments. Some say this mountain is actually an ancient pyramid, the others think it was created by nature and the third opinion is that it is a work of a higher power.

From the plains of Eastern Serbia this mountain, which demands admiration, rises very suddenly, this at least we know for certain. Rare healing herbs grow on the perfectly shaped mountainside and its hidden inside parts are decorated by numerous underground streams, caves and caverns.

Rtanj represents a phenomenon which attracts more and more tourists, scientists,  mountaineers and adventurers each year. Everybody who has visited this mountain at least once, claims that they felt some mysterious energy, that the air smells diffrently and that the nature looks unreal. Some of them even claim that they have been cured by the famous “Rtanj tea” and the others have found their peace there.

Experience the magic of Rtanj

The best way to experience the magic of this mountain is to take a walk, climb to the mountaintop Šiljak and enjoy the incredible view. The time it takes to climb to the top and to go down again depends on your physical fitness. There are several campsites and places where you can rest, so feel free to stop and catch your breath.

The exploration of Rtanj will be an amazing adventure which you surely won’t forget. The surroundings that will change from thick forests to rocky landscapes, from even to uneven ground and the abundance of healing herbs are only some of the things that await you, if you decide to visit this mountain. Fresh air and the wonderful view are the rewards that wait for you on the mountaintop.

Rtanj is famed for the endemic plants which grow only on this mountain and that are protected by law. The most famous one is “Rtanj tea” (Saturea montana), which has many healing properties. Only until recently the picking of “Rtanj tea” was a part of an annual event “Sv Jovan Biljober” (St. John the Herb Picker), held on July 7, but it was banned due to a serious decline in growth.

On the mountaintop “Šiljak” (1565m) there is yet another interesting place, the symbol of the mountain as some refer to it, which tourist like to visit. The ruins of a church, a chapel dedicated to St. George is the place in question. Another interesting fact about this church is that it was built in honor of the late owner of the “Rtanj” mine in 1935. by his wife with the help of one thousand workers. Today only the ruins remain, it was destroyed by dynamite when treasure hunters attempted to find the hidden gold.

A chapel dedicated to St. George

Another tourist attraction is the “frozen pit” (“ledenica cave”) which is located on the southeast side of the highest peak of Rtanj. The cave is fifty meters long and its floor is covered with clay and stone blocks. It is the only “frozen pit” in the karst fields of Eastern Serbia where low air temperature has been recorded. It is a unique experience to enter the vast hall of this pit and to take a walk on its unusual soil.

Even those who do not believe in the stories about aliens, fiery spheres and energy fields, cannot help but wonder if the stories about this perfectly shaped mountain are indeed true. One of the scientifically proven facts is that Rtanj emits a type of energy which is very beneficial to human health.

A recording was made with the help of a special instrument, which detects bio-energetic and electromagnetic radiation; it showed that the mountaintop “Šiljak” usually absorbs energy whereas “Svetilište” which is located at the foot of the mountain almost exclusively emits energy. Another interesting fact is that the level of radiation which was recorded in some places on the mountain is way higher than in the urban area.

Stories about unusual flying objects, which circle around Rtanj, fiery spheres, aliens and voices in unknown languages that some claim they have heard, are still a mystery. The thing we know for a fact is that Rtanj has the same angle of inclination as the Pyramid of the Moon in Mexico and the same angles as the Pyramid of Cheops. Coincidence or…?

Rtanj is extremely popular amongst the amateur mountaineers, who usually visit the mountain from the beginning of April until the end of October, when there are organized tours to “Šiljak”. During winter only experienced climbers go to the mountaintop, because of the harsh climate. On the northern side of the mountain which is covered in forests, there is a hunting ground which spreads over 6368 hectares. Roe deer and wild boars are the usual game.

How to get to Rtanj?

Rtanj is two hundred kilometers away from Belgrade. If you are traveling from Belgrade or Niš, the easiest way to get to Sokobanja is to follow E75 motorway Belgrade-Nis. From Sokobanja you should take the regional road to Aleksinac, and then turn right towards Trgovište village. When you pass through this village, you should make a turn to the right which will lead you to Muždinac village. When you arrive to Muždinac continue forward until you see a macadam road on your left. Take that road and it will lead you to the foot of the mountain.

When you are already here, don’t miss…

Sokobanja – The oldest spa resort in Serbia, whose thermo-mineral springs are some of the most radioactive in the country. Sokobanja is a perfect place for recreation and relaxation in the fresh air. You can also visit the famous Soko grad (Falcon city).

Zaječar – is located on the confluence of Crni (black) and Beli (white) Timok, it is the largest city in this region and the administrative center of Timočka krajna. Taking a walk through the city and getting to know its architecture can prove to be interesting.