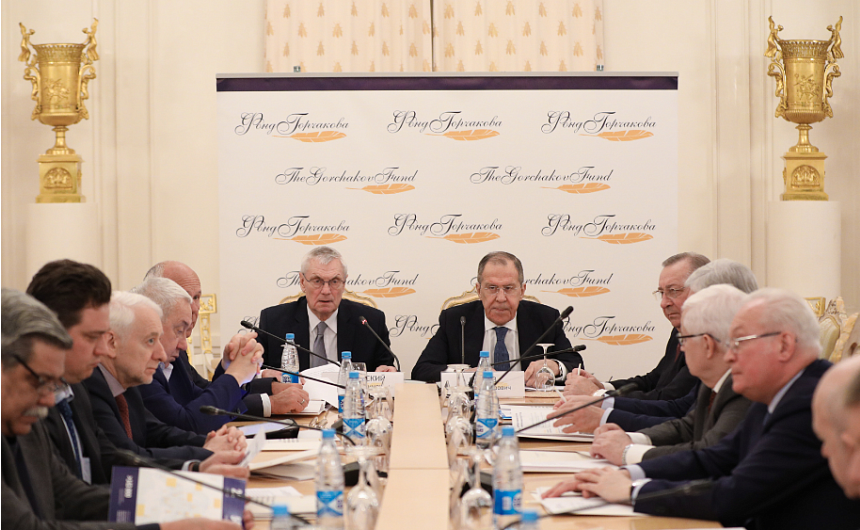 During his speech, the head of Foreign Service said:

We are delighted to welcome you to a regular meeting of the Board of Trustees of the Alexander Gorchakov Public Diplomacy Fund.

As always, we have a busy agenda. We will review our performance last year and map out the main areas for the fund’s activity in the near future.

We must make a number of decisions on issues that are vital for the fund, in part, we will choose an executive director, and members of the Management Board and the Board of Trustees.

On February 2, the fund celebrated its tenth anniversary. I am happy to say that during this period it has achieved tangible success in supporting public diplomacy and has done much for expanding international contacts with domestic NGOs. I will quote just a few figures: the fund has supported 300 grant projects and conducted over 500 events. It is developing cooperation with Russian and foreign young people, something we focus on. The Gorchakov Club that brings together young participants from scientific and education programmes is functioning successfully. The Dialogue in the Name of the Future, an educational forum, has also shown good results.

The Russian-Georgian Public Center established with the fund’s support in Tbilisi is doing fairly well. The fund will soon open an affiliate in Minsk.

All these developments are encouraging. Naturally, we will have to do much this year as well, all the more so since the situation is tense and, as you know, many official channels for dialogue have been frozen or even eliminated by our Western partners and not at our initiative. So, the need for contact between civil societies, researchers, experts and political scientists is beyond doubt and is becoming increasingly obvious. This is an important component of maintaining trust and understanding in international communication as well. Of course, we hope our NGOs will continue promoting a unifying, future-oriented agenda at international venues, such as the UN, UNESCO, the OSCE and the Council of Europe.

Closer cooperation in the Commonwealth of Independent States (CIS) should remain one of the top priorities. We are interested in the development of inter-societal dialogue, including the Eurasian integration format and would like to see experts from the EAEU countries and Russian regions involved in these efforts.

This year Russia chairs BRICS and the SCO. We hope the fund will be able to contribute to promoting partnership in these multilateral organisations with the potential of civil societies.

There is no need to speak about this at length but regrettably we are seeing intensifying unseemly attempts to politicise history and falsify facts. There is an obvious striving to subject to cardinal revision not only commonly known causes but also the universally recognised international legal results of that global conflict. The liberators are being smeared whereas the Nazis and their accomplices are whitewashed. The goal of such actions that nobody conceals is to cast aspersions on today’s Russia and push forward a distorted vision of the entire postwar system of interstate relations. The growth of dangerous trends in some European countries, such as freedom of speech violations, abuse of the rights of national minorities and mounting extremism and overtly neo-Nazi attitudes is a source of deep concern against this backdrop.

I believe that in this context we should pay special attention to the protection of historical truth, prevention of the revision of the results of victory and consolidation of global and regional security and stability, which rests on the UN Charter. The tone for these efforts has already been set by President of Russia Vladimir Putin. He did this in his remarks at the CIS informal summit last December and the forum held in Jerusalem on January 23 of this year under the slogan “Remembering the Holocaust, Fighting Antisemitism.” I am convinced that the Gorchakov fund can contribute to these efforts by using its tangible potential.

We will discuss in detail these and other issues at our meeting today. The Board of Trustees will endorse priority areas for 2021. I hope our work will be rewarding.

In conclusion, I would like to emphasize once again that our work would be impossible without charitable support. Using this opportunity I would like to thank members of the Board of Trustees Sergey Chemezov, Alexei Mordashov, Nikoilai Tokarev, Alisher Usmanov, Vladimir Yevtushenkov and Mikhail Prokhorov for supporting the fund in 2019.”

Executive Director of the Gorchakov Fund Leonid Drachevsky made a report about activities of the Fund in 2019. Sergey Lavrov and other members of the Board of Trustees took part in the discussion of the report.