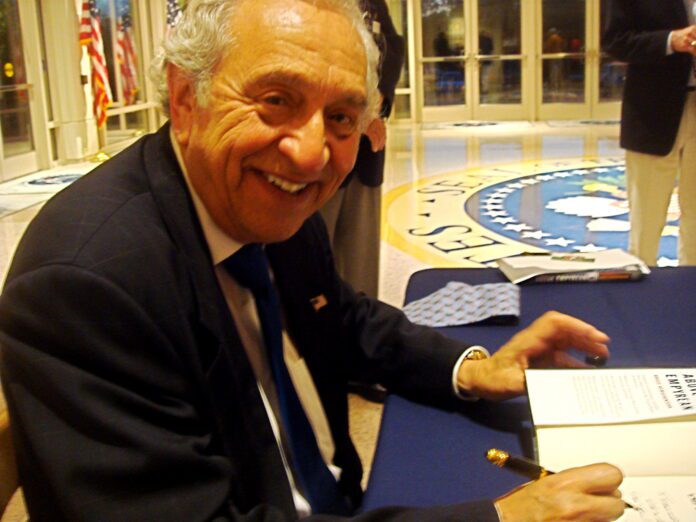 Bruce Herschensohn would hate what I’m about to do. He always lamented that Years of Lightning, Day of Drums—the acclaimed documentary he produced about the life and assassination of President John F. Kennedy—tended to get re-aired on the anniversary of the 35th president’s death. Bruce, whose innate love of America had only deepened from a life spent travelling the world, always thought it felt wrong: other countries commemorate deaths, he believed. In America, we celebrate births. Yet those of us who knew and loved the man had to wait until Bruce’s death on November 30 at 88 to pay him proper tribute, if only to ensure he wouldn’t add more accomplishments to a life already crammed with them.

Bruce was still a young filmmaker when he made Years of Lightning for the U.S. Information Agency in 1964. USIA handled the nation’s “public diplomacy,” creating pro-American, anti-Communist programming for distribution overseas, a practice that critics derided as propaganda. Bruce rejected that label by way of embracing it: “If you show me the picture of your girlfriend in your wallet, that’s propaganda, too,” he’d playfully rejoin. His broader point: defending America was nothing to be ashamed of, as long as you did it honestly. That sentiment was seconded by Congress, which in 1965 passed a special act allowing Years of Lightning, Day of Drums to become the first USIA film screened for American audiences (with the profits going to the construction of the Kennedy Center in Washington).

That alone could have been the accomplishment of a lifetime. Yet, when considering the life of Bruce Herschensohn, such triumphs barely register as footnotes. Born in Milwaukee, he was part of the great midcentury diaspora of midwesterners to Southern California, moving to Los Angeles during his childhood. After high school, he got a job as a messenger boy at RKO pictures, did a stint in the Air Force, and then began his documentary filmmaking career, a pursuit that made him an eyewitness to almost every major event in postwar America. He was in Little Rock for the desegregation of Central High School and Cape Canaveral for the early space launches. And, of course, he was in Washington for Jack Kennedy’s funeral.

His skill behind the camera—he wrote, directed, and composed the score for Years of Lightning, Day of Drums—resulted in an offer to become the director of motion pictures and television for USIA under Lyndon Johnson. It was an odd fit for a Goldwater Republican, but in the midst of the Cold War, Bruce believed that the values USIA represented transcended partisan allegiances. LBJ’s judgment was not misplaced. In 1970, Czechoslovakia 1968, a USIA documentary about the Prague Spring, won the Academy Award for best documentary short.

Bruce’s moviemaking days were numbered, however. Richard Nixon was so impressed by his suggestions for the 1972 Republican Convention that he brought him on to the White House staff as Deputy Special Assistant to the President, a role he remained in until resigning a few days after the president who appointed him. In the late 1970s, after a stint collaborating with Alexander Solzhenitsyn, he returned to Los Angeles and embarked on a new career as a broadcaster, delivering three commentaries a day—one on radio, two on television—for the nation’s second-largest ABC affiliate, oftentimes in a debate format with former California senator John Tunney.

In the days when Southern California was a power center in Republican politics, it was often said that you could distinguish the Nixon men from the Reagan men at a glance. Each were said to follow the cues of their principal: the Nixonites cold, cynical, and calculating; the Reaganites sunny, positive, and idealistic. Bruce was a walking reprimand to that thesis (though, as a member of the Reagan transition team, he arguably had a foot in both camps). If your only examples of conservatism in the 1980s were Ronald Reagan and Bruce Herschensohn, you could be forgiven for believing that all Republicans had a low resting heart rate, a quick wit, great hair, and a voice that sounded like God after a glass of wine. Lots of people disagreed with Bruce Herschensohn; no one hated him.

Bruce twice ran for the Senate, finishing second in a 13-candidate field in the 1986 Republican primary and earning the party’s nomination in 1992, when he came within five points of defeating Barbara Boxer for an open seat. He never tried for any other elected office, simply because none interested him. Single-mindedly focused on foreign policy—he was virulently anti-Communist—the Senate was the only station that he thought more powerful for those purposes than a media perch.

His amiability could mask just how formidable he was on those issues. You tangled with Bruce on foreign policy at your peril. Those who thought it easy to outwit the man whose terminal degree was a high school diploma severely miscalculated. Bruce started his reading regime every morning at 4:00, consumed the English editions of newspapers from around the world, refused research assistance, and committed everything to memory rather than relying on notes. This tended to leave his sparring partners bewildered. The man seemed too nice to be such a savant.

After his final Senate run, he settled into elder statesman status, doing stints at Harvard, the Claremont Institute, and Pepperdine University’s School of Public Policy, where he taught a course on international relations designed to show students what it was like to make policy in the White House. I first met him on taking that class in 2006. Though he was more than 50 years my senior, we had an immediate rapport—owing in part to the fact that we were the only two people willing to endure the opprobrium that came along with publicly smoking cigarettes in Malibu.

None of the natural affection I felt for the man, however, prepared me for an encounter we had early one autumn morning on the nearly empty Pepperdine campus. I had recently completed an assignment for his course in which we were to draft a statement of foreign policy principles as if it was a presidential speech. When I greeted Bruce that morning, I noticed that he wore a deadly serious expression—unnerving behavior from someone normally so jovial. “Troy, I read your paper,” he said—his baritone descending into a bass—“and you need to be a presidential speechwriter.” Perhaps, I thought, I was just being treated to an overwrought compliment. But then he delivered the coda: “That’s why I sent your paper to the chief speechwriter at the White House and told him to hire you.”

This was, to put it mildly, absurd. I was 23 years old, unconnected, uncredentialed, and not ready for a mid-level writing job at Hallmark. Yet within a year, I was walking through the northwest gate of the White House, watching the sun rise over the West Wing, and awaiting a breakfast appointment in the White House Mess. Six weeks later, I was being shown to my desk in the Eisenhower Executive Office Building, all because Bruce Herschensohn—who was nearly 75 at the time and had every right to be spending the rest of his life on a beach somewhere—felt duty-bound to remain in service to his country, even if it was only a matter of finding people who could follow, however inadequately, in his footsteps.

I had been looking through Bruce’s papers in the months before his death—I had hoped to pen a tribute that this humble man would live to blush over—and I’m repeatedly moved not only by what he saw but by the poetry of how he recorded it. Among that collection is a typed set of notes, his handwritten editing marks over it, recording his thoughts upon leaving Cape Canaveral in the summer of 1961. In it he writes:

Once a man has been there, he may return to the quiet and comfort of his living room miles away and worlds apart from the Cape—but he will sit there, at times a stranger. He knows of a yesterday filled with undefinable colors, of a platform into space, of black skies filled with stars—some old and some new. He has seen man reach. He has reached himself. Tomorrow they will reach further—and so he must be there tomorrow.

Here’s to Bruce Herschensohn, the newest star in those black skies. Godspeed, my friend.

Troy Senik is a former presidential speechwriter and the author of the forthcoming book A Man of Iron: The Turbulent Life and Improbable Presidency of Grover Cleveland.

The Training Disconnect: How to Prepare Diplomats for the Digital Age

Symbolically on the occasion of the Earth Day, Color Media Communications is organizing an online conference Serbia Goes Green – Green Economy as the Pillar of Environment, which will be held on Thursday, April 22, 2021, starting at 11 am. All interested viewers will be able to follow the conference via the LINK The need to take more care of the environment we live in is not new, only the current unstable epidemiological situation caused by Covid-19 has confirmed that we must raise the awareness of the people around us every day and take more care of the world we… [...]