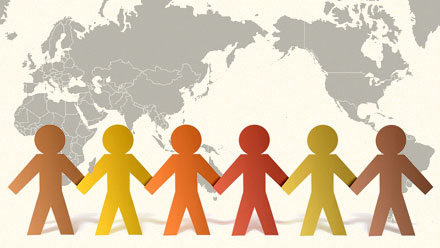 The importance of Public Diplomacy on foreign policy and its challenges
Public diplomacy is one of the most important parts of international and intercultural communication (DeMars, 2005; Nye, 2008). Governments across the world tend to use public diplomacy as an effective tool to build a positive image with publics of other countries. Public diplomacy eﬀorts aim at inﬂuencing foreign publics, so that they may inﬂuence their own government’s actions toward another nation. Public diplomacy eﬀorts have blended both interpersonal and mass communication tactics. Governments have used mass communication including radio, satellite television, print opinion pieces, and editorials to build positive national images. On the interpersonal side, cultural exchanges and travel tours have also been used to build relations. Today, social media and social networking are included in a more diverse toolkit of tactics for nations to communicate with foreign citizens (Zaharna, 2013).
The core idea of public diplomacy ‘is one of direct communication with foreign peoples, with the aim of aﬀecting their thinking and, ultimately, that of their governments’ (Malone, 1985, p. 199).

During the Cold War era, a mass communication-oriented approach to public diplomacy emerged. After the Cold War ended, nations, organizations, as well as individuals found themselves living in a much more inter-connected world; thanks to the accelerating trends of globalization and technology innovation. Mass media are no longer the only or default means to reach a mass audience as changes in global politics. Nation-states and diplomats need to explore a new approach that recognizes the complex architecture of the multi-hub, multi-directional networks that exist between communities around the world. These networks are created, sustained, and changed by various types of intercultural and international communication.

To properly understand the very nature of public diplomacy, it is necessary to ﬁrst brieﬂy introduce the discussion of global network society and the power of international communication networks. Castells (2008) argues that in the contemporary society, core communicative activities are globalized and networked. Castells conceptualizes social processes and institutions as ‘expressions of networks’. The comparative value of individuals, organizations, and nation states depends on if they can be included in important networks. What can be considered as valuable in networks is not static, but constantly ‘programmed’ in networks. In a network society, governments, like any other organizations, institutions, or individuals, are networked by communication and dependent on other actors.

At the international level, governments are members of governmental organizations and treaties and rely on the authorities of this international polity to advance their interests. Nation-states increasingly form dense networks of international institutions, supranational organizations, and net-works of states to deal with global issues. Some nation states also actively form cooperative networks with NGOs. At the domestic level, governments are subject to pressure from business and interests groups, and their power is sometimes challenged by social movements. Even for semi-authoritarian governments such as the Chinese government, international pressure can be transmitted into a domestic force due to network interdependency.

From a public diplomacy standpoint, the legitimacy of many governments no longer solely depends on their internal factors but also on their relationships with other actors . For countries that seek to enhance their inter-national inﬂuence and improve their image and recognition in the global public discourse, being imbedded in well-respected international networks can be crucial.

Norway, for example, has gained a strong position in the international community for its long history of support for international peacekeeping. Norway has assisted with peace work in the Philippines, Colombia, Guatemala and Sri Lanka. Hence, in “the area of peace mediation and reconciliation’ it is perhaps second to none” (Melissen, 2005, p. 70), as continued participation in peace negotiations across the globe has provided the nation with expertise in that area. By defining its “national interest to include attractive causes such as economic aid or peacemaking” (Nye, as quoted by Melissen, 2005, p. 73) it has obtained a soft power, that in certain circumstances is superior to more influential countries. However, this soft power lacks the support of strong military power or geographical extension. The influence that Norway can exercise on places remote from its geographical position is possible because of the emphasis that it has put on constructing its national image. In order to be effective for the pursuit of its foreign policy it has to “be genuine and trustworthy; internally anchored and must be perceived as attractive” (Melissen, 2005, p. 84) for those targeted countries.

Nevertheless, it might be argued that the same factor that provides soft power to Norway may also be the same one that jeopardises it. The image of the nation is that it is fixed to its peace-promotion role, and that rather than flexibility it imposes rigidity because is “too easy for a country to be discredited and soon forgotten about” (Melissen, 2005, p. 84). Therefore, although Norway enjoys at the moment a very privileged situation in the international arena, exercising more soft power than some other nations with superior capabilities, it might be turned against itself as it lacks the capabilities that would help to change its area of influence.

Nevertheless, Norway has demonstrated that is able to exploit a resource that many other countries desire. Therefore, it is able to persuade others to act in its favour, such as some European countries that, because political interests are in a place to which Norway has access to, offered favourable conditions for its trade on seafood (Melissen, 2005, p. 82). Furthermore, it might be argued that such favourable political position because of its public diplomacy, persuades some states from the international community to turn a blind eye to other less honourable causes, such as whale-hunting.

This essay has discussed the fact that Public Diplomacy has become increasingly important in recent years. This essay demonstrates that currently there is a tendency to engage in these persuasive forms of influence. Soft power is one of the characteristics of Public Diplomacy, and these three examples can help to illustrate an increase in its use. Not all states are able to employ Public Diplomacy in a manner that serve their interests there must be a willingness for the target to embrace such influence. In other occasions, soft power on its own does not have enough power to convince others to support their interests, so must be used in combination with other types of power and influence.

Effective Public Diplomacy is the number one requirement reflecting a move away from old style foreign policy between governments to a new style of multimedia and multi-parity international policy. The very notion of security needs some serious re-thinking as a basis for modern diplomacy. In addition, the pivotal role of science and technology in modern international relations requires different skill sets among diplomats and better outreach by foreign services to other expertise, government and non-government, than is the case now. Governments must respond by changing the way they practise diplomacy, offer development assistance, and deploy force. This means making the new public diplomacy a core foreign policy tool.