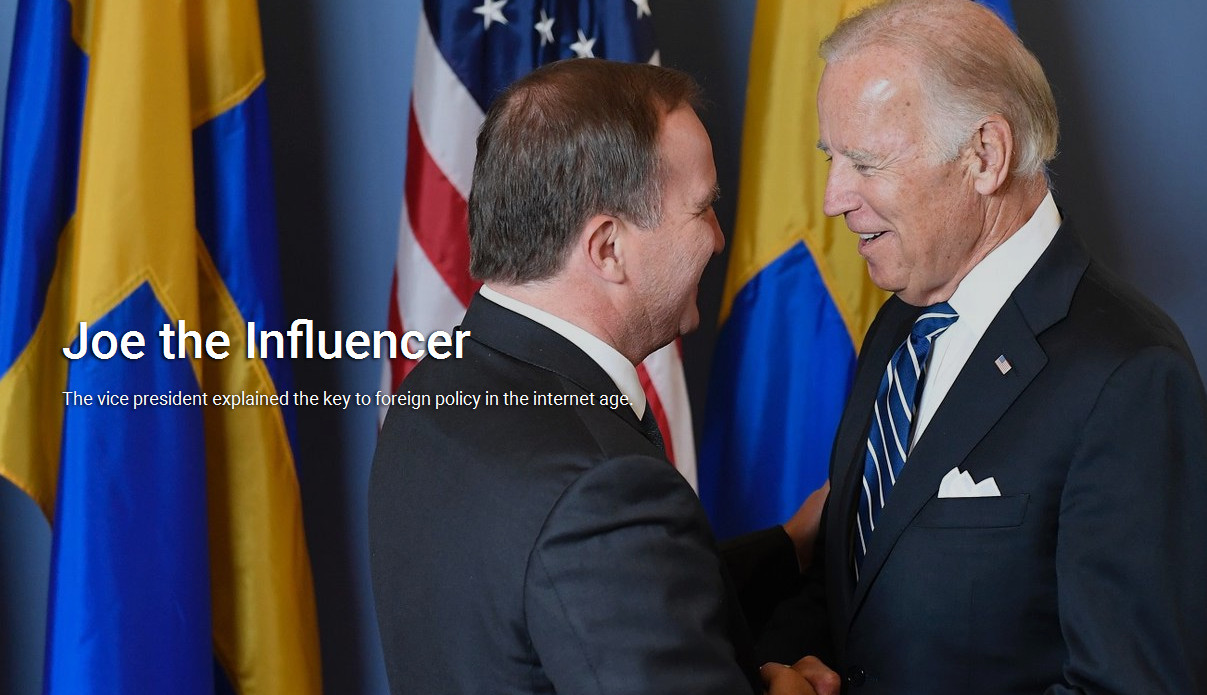 In a recent interview with The Atlantic, Vice President Joe Biden laid out what is perhaps the clearest distillation to date of his approach to U.S. foreign policy. For Biden, “it all gets down to the conduct of foreign policy being personal… All [foreign policy] is, is a logical extension of personal relationships, with a lot less information to act on.”

On the surface, the formulation may be a bit simplistic. After all, diplomacy is at least about process and national interests as it is about a personal connection. Nevertheless, the vice president’s comments underscore a crucial point. The art of statecraft has been fundamentally altered by the internet. It is no longer the exclusive purview of presidents talking to prime ministers, but entails a complex mix of actors who have the ability to reach past state gatekeepers to directly engage mass audiences, and also target specific individuals.

In this context, so-called digital diplomacy represents a qualitatively new capability to communicate with global audiences, to directly convey a message and to amplify the volume (and strategic impact) of events. Its importance was realized years ago in the protest movements of the Arab Spring, Turkey’s Gezi Park protests and Iran’s ultimately unsuccessful Green Movement. These early events heralded a new era where technology innovation mixed with liberal democratic ideals could inform and empower foreign citizens. But these opportunities were not leveraged by U.S. politicians to effectively communicate to those audiences that America is both engaged and interested.

Those opposed to the West, on the other hand, have seen – and seized – the opportunities afforded by digital media to exploit personal connections. Peter Pomerantsev and Michael Weiss, for example, have documented how Russia has successfully “weaponized” information surrounding its invasion of Ukraine and annexation of Crimea. Extremist groups like the Islamic State, too, have successfully exploited the digital age to provide themselves with an outsized influence. The results are visible in the way the Islamic State group has managed to effectively control the media cycle with its barbarism, and to recruit tens of thousands of fighters and supporters to its cause.

The rise of digital diplomacy and its antipode, disinformation and propaganda, is a challenge to traditional diplomatic statecraft. Today, the traditional metrics of power – diplomacy, intelligence, military and economic – have been augmented by a distinctly new, albeit ephemeral, one: influence.

Influence is the ability to have an effect. In this case, it represents the ability to persuade foreign leaders or audiences to agree and even adopt a belief that is in the communicator’s interest. Unlike the seeming permanence of a standing army or a functioning economy, influence, like credibility, is a resource that is based on mutual agreement. It can wane if not tended, and it can shatter if mishandled. Most importantly, it can also just disappear as new competitors come onto the scene.

Washington has yet to adapt to this new reality. President Barack Obama’s preferred approach to exercising U.S. power – which is often criticized as aloof, detached and simply a reaction to world events – is not the most effective philosophy for prosecuting foreign policy in a world awash in social and mobile media. Paradoxically, it is Biden, a decidedly old-school sort of diplomat, that has formulated what is perhaps the best way to augment U.S. influence around the world in an era of technological change.

Whoever wins the White House in November would be wise to invite Citizen Biden over for a chat about how to build authentic engagement with world leaders and audiences alike, and how those same lessons might help advance America’s interests.