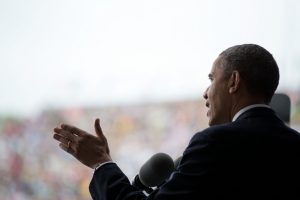 President Barack Obama delivers the commencement address at the United States Military Academy at West Point commencement ceremony at Michie Stadium in West Point, NY, on May 28, 2014. Official White House photo by Pete Souza.“America must always lead” was the theme of President Obama’s speech at West Point on May 28, 2014. This essay – posted on the former website of the Public Diplomacy Council on June 3, 2014, now republished for reference – was a response.Five years later, the nation has a new president, but the four trends mentioned in the essay endure It’s still true, for instance, that “no cavalry troop with a stagecoach of gold is headed our way.” And the need for strong diplomacy is as necessary in the current administration as it was in the last.The columnists and talking heads have given out grades – ranging from “A” to “F” – for President Obama’s speech on foreign policy at West Point. Me? I’m just confused – indeed baffled.Borrowing an old phrase from the 1960s, what “blows my mind” is that no one has noted the obvious area of consensus among supporters and critics of the President. All implicitly agree that the United States must have more diplomacy in the future – strong diplomacy.For those who support the President’s posture and believe America should lean away from use of military force, the clear implication is that our nation must rely on diplomacy.

Seals of the United States Armed Forces.Those who are convinced of the opposite – that the United States must be willing and prepared to use the armed forces – must come to the same conclusion. First, the armed forces can respond to only the most severe crises, so diplomacy must handle the others. Second, it is diplomacy that marshals coalitions. And third, senior military commanders all know that deployments require strong diplomatic support – for bases, access, transit rights, supply, use of the radio spectrum, status of forces, and many other matters. These are all diplomatic tasks.Henry Kissinger noted that once policy is set, the State Department and the Foreign Service tend the “nuts and bolts.” It is American ambassadors and their staffs who make things happen. Foreign Service Officers inform the governments and the citizens of our allies, partners, and foes of new policies. They deliver demarches. At the negotiation table, they provide specialized knowledge of countries, regions, and issues, and they bring a wealth of experience in bilateral and multilateral negotiations. They speak to the press. They meet people from all walks of life and hear their views. They advocate for cooperation, collaboration, and votes for our positions at the United Nations and other international organizations. They report local reactions, analyze old and new agreements, set up meetings. They fund initiatives and get people moving. The one word that captures all this activity is “implement.”

Army General John W. Nicholson, Resolute Support commander, speaks to nurses, medical staff and hospital managers at the Kabul Women’s Hospital in Afghanistan on May 18, 2017. Nicholson emphasized the importance of women in peace building and in strengthening the future of Afghanistan. Nicholson toured the hospital with Afghan Defense Minister Mohammed Masoom Stanekzai, Sidqa Abudllah Adeeb-Rabia Balkhi, hospital director and Ambassador Hugo Llorens, the special chargé d’affaires of the U.S. Embassy in Kabul. Air Force photo by Tech. Sgt. Robert M. Trujillo.Strong diplomacy needs more than money, and it cannot be turned on and off like a spigot. In Afghanistan during the civilian surge, sizable sums were provided to the civilian agencies of the U.S. government, all represented on the Country Team at the Embassy in Kabul. The amounts overwhelmed the Embassy’s capacity. Not all the money was spent well. The jury is still out on whether the money achieved its goal – to strengthen Afghanistan and its government so that nation cannot again become a sanctuary and training ground for terrorism.It’s not only, then, that we need “more” diplomacy. We need strong diplomacy. This means that the institutions of American diplomacy – the Foreign Service in particular – need an upgrade, even reform, in a time of grave challenges.The need for strong diplomacy, however, faces some adverse trends.Trend: Even a partial list of foreign policy migraines is long: Ukraine, Afghanistan, Iran, the islands between China and Japan, the South China Sea, North Korea, Nigeria, Pakistan, Syria, Gaza, South Sudan, Mali. We can safely predict this list will lengthen. We need more diplomats with first-hand understanding of these places. We need them overseas, at the United Nations and other international organizations, and in Washington.Trend: The changes set in motion by the Arab Spring will have different outcomes in different countries, many adverse to our interests. The great intra-Muslim debate over the future direction of their faith has only begun. Al-Qaeda, its franchises, and other extremist groups now can move fighters and weapons between unstable areas. We need more diplomats who have worked amid these changes, know them at first hand, met those who are part of the trends, and speak to them in their own languages.Trend: A diplomat for three decades, I know that American diplomacy is strong when our economy is robust. For several years, however, anemic economic growth and the debt and budget crises have diminished America’s standing overseas.Trend: I also know that the reality of American military power helps American diplomacy achieve more. We can see from the budget reductions for the armed forces, however, that domestic spending is now squeezing defense. As entitlement spending continues to rise, it will also crowd out spending on foreign relations – just when the nation needs more diplomacy.As America’s diplomatic agenda becomes more crowded, part of the State Department’s organizational culture becomes relevant. It’s in the Foreign Service DNA to never tell the Secretary or the President “we can’t.” The never-complain character of the Foreign Service, however, now masks some substantial institutional deficits.Dozens of studies have described them. Officers go overseas without adequate language training, and the system that regularly sends 50-year old officers to learn new languages needs review. There is no “float” to allow FSOs the same kind of sequenced professional education as officers in the armed forces.

Arabic language and culture instructor conducts class for three students in the Foreign Service Institute’s Arabic. Photo courtesy of the US Department of State.Any FSO will tell you that “we do policy planning, but we don’t do operational planning.” The lackluster performance of the State Department in its “whole of government” role in Iraq and Afghanistan can largely be attributed to this planning deficit.Staffing embassies in Baghdad and Kabul with more than a thousand Americans was too large an undertaking for the small corps of Foreign Service generalists, who number only about nine thousand in all. The State Department has only been able to absorb the extra work after 9/11 by using retirees and contractors. When supplemental funds contract, that extra help won’t be available.In the few moments when Foreign Service officers have time to reflect on the state of their profession, they express anxiety over whether there’s enough training, why only the United States divides its Foreign Service into “cones,” why no one cares to examine the professional successes and failures during more than a decade of war, how to remedy the lack of a “constituency” for the Foreign Service, or why new officers must wait so many years before receiving an assignment in their specialty.While the President, the Secretary, and the administration cope with the many challenges and threats in the world, then, they must embrace one more task. To have strong diplomacy tomorrow, reform of the Foreign Service must begin today.

President Donald Trump, joined by Vice President Mike Pence, Senate Majority Leader Mitch McConnell, Secretary of State Mike Pompeo, and other Republican legislative leaders, listen to a briefing by Secretary of Defense James Mattis in the Laurel conference room at Camp David on January 6, 2018. Official White House photo by Joyce N. Boghosian.It has been so stretched that it has had no time or energy to reform itself. Few of the recommendations of outside panels have ever been implemented. FSOs continue to hope for additional funds. Given the new and coming budget realities, they are waiting for Godot.No cavalry troop with a stagecoach of gold is headed our way. That means that the leadership of the State Department must do what any corporation, university, foundation, or state government must do when budgets are short – stop doing things that are less vital in order to free up funds for new, higher priorities. Among those priorities, the Department must invest some time and money in itself, now, to have a more capable Foreign Service, later.Reform cannot be given to outside panels, and the Deputy Secretaries, the Under Secretary for Management, and the Director General of the Foreign Service can only launch it with support from the top. Or to use Plutarch’s more earthy saying: Nothing fattens the horse so much as the king’s eye.Mr. President, Mr. Secretary, Members of Congress, put your eyes on reform of the Foreign Service.