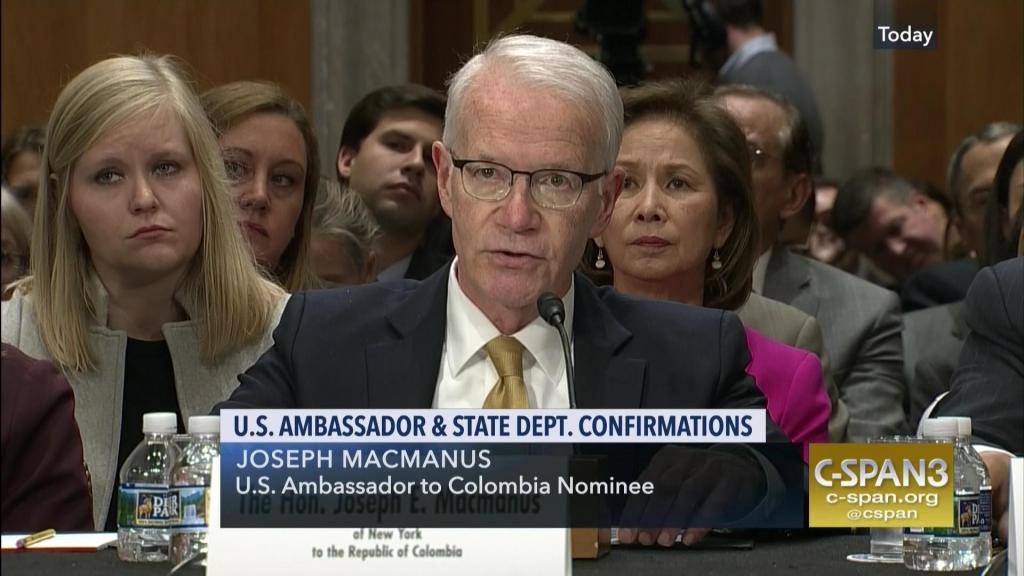 Macmanus image from
Joseph Estey Macmanus, nominated November 29, 2017, to be the next ambassador to Colombia from the United States, has more than 30 years’ experience in the Foreign Service, has participated in difficult negotiations with foreign adversaries and helped to run the Department of State. Although his confirmation hearing before the Senate Committee on Foreign Relations was held on March 7, 2018, his confirmation was blocked by Sen. Mike Lee (R-Utah). The reason? He was former Secretary of State Hillary Clinton’s executive assisatant, and he was supported by former Secretary of State Rex Tillerson.
Macmanus was born in 1953 to Joseph and Miriam Macmanus and has three brothers and two sisters, including his twin, Mary. He grew up in Buffalo, New York, but left the area for college, attending Notre Dame. He earned a B.A. in English there in 1974, and then returned home and earned a master’s in information science from State University of New York in Buffalo, although his date of graduation could not be confirmed.
Macmanus joined the Foreign Service via the U.S. Information Agency (USIA) in 1986 [on USIA and public diplomacy [JB emphasis], see]. His first posting was in El Salvador. In February 1989, Macmanus, as the U.S. embassy’s spokesman, defended the Reagan administration’s aid to the Salvadoran government by claiming that the government and the Salvadoran military had not been involved in death squad activity for the previous seven years, when, in fact, they had been. Macmanus was subsequently sent to Mexico, Poland and Belgium. From 1995 to 1999, he was in Washington as the assistant to USIA’s deputy director.
Much of Macmanus’ career has been spent helping to administer the Department of State. In 2005, he was deputy assistant secretary for legislative affairs. Three years later, Macmanus became executive assistant to then-Secretary of State Condoleezza Rice. He continued in that job after Hillary Clinton took over the department in 2009.
In 2011, Macmanus was named principal deputy assistant secretary for legislative affairs. He served in this capacity until the following year, when he once again became Clinton’s executive assistant. Macmanus had that job on September 11, 2012, when the U.S. diplomatic compound in Benghazi, Libya, was attacked. Because he was one of Clinton’s closest associates, he was involved with the official response to the attacks.
In November 2012, Macmanus was named permanent representative to the United Nations mission in Vienna and to the International Atomic Energy Agency. There, he participated in negotiations for the Iran nuclear deal. During a March 2013 negotiating session, Iran accused Israel of genocide. Macmanus, along with representatives of Canada and Australia, stormed out of the session in protest. After the agreement was finalized, however, Secretary of State John Kerry named Macmanus to coordinate implementation of the deal with Iran.
Since 2014, Macmanus has served as executive secretary in the Department of State, working as liaison and the clearinghouse between the department’s bureaus and the offices of the secretary, the deputy secretaries, and the director of policy planning.
Macmanus and his wife, Carol, have a son, Chris. Macmanus speaks Polish, French and Spanish.
-Steve Straehley
Original Article