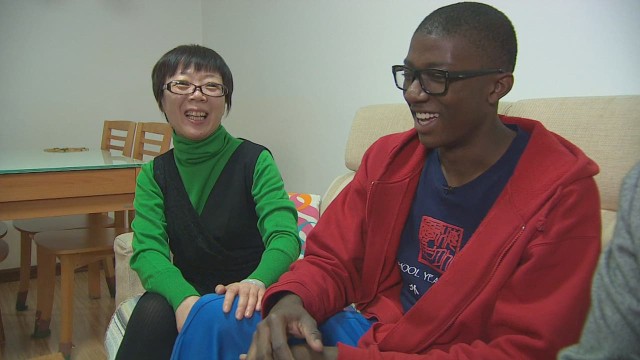 (CNN) — Anthony Box, 17, is your typical all-American boy. He spends his time studying, chilling with his school friends, and riding a unicycle.

Except Anthony is living for a year in Beijing with a Chinese family.

He’s part of an ambitious program organized by the “100,000 Strong Foundation” that aims to strengthen often frosty U.S.-China relations, one teenager at a time.

The organization says it has already achieved its aim of having more than 100,000 U.S. students in China.

However, the numbers of American students in China are dwarfed by the 235,500 Chinese currently studying in America.

Their ranks include Shunshun Zhang, 18, who spent three years studying at a high school in Vermont.

Can Anthony and Shunshun succeed where presidents and diplomats have failed and bridge the gap between the two superpowers? Here are their stories.

Anthony Box studies in Beijing and lives with a Chinese family.

Many of my American classmates thought it was insane to leave America and go to school for a year in China. I’m interested in foreign languages and cultures and China has always piqued my interest.

The most surprising thing that I encountered here was the large number of people living, working, and moving around in Beijing.

When I ride my unicycle, hordes of people stop what they are doing just to stare in amazement. It’s also helped me realize that in Beijing the herd mentality is a very common thing.

Before arriving in China, I believed that many locals would be unwelcoming to foreigners like myself but that’s totally inaccurate. The Chinese people I meet are always friendly and willing to help.

On weekends, I go to Beijing’s numerous parks and chat with the local people. Many of the elders love to explain the history of China and talk about their childhood, which allows me to understand the richness and nuances of China’s culture.

The language barrier has been the main challenge.

In the beginning, there were only a few topics that I could comfortably speak about with my host parents. Conversations were limited often out of fear that I would run out of words to say or I would not understand.

I’ve started to move out of my comfort zone and can speak about many different things such as Beijing’s pollution, traffic and divorce.

Living with a Chinese family has been wonderful. I wake up in the morning and eat breakfast with them. They help me understand and navigate Chinese culture. I consider and treat my host family as if they were my own family at home. And, I feel very fortunate in that that they treat me like their own son.

My school back home is larger so I’m unable to get to know every student and faculty member, but my school in China is much smaller. This also allows for the students and teachers to have a more personal relationship with each other.

Shunshun Zhang recently graduated after studying at a high school in Vermont for three years. He will attend the University of Iowa next year to study mathematics.

I have been living with Chapman family in a small Vermont village called Post Mills. My host parents are the sweetest couple and best parents I have met. Without their help, I would not have fitted into life here so fast.

My three host siblings have helped me a lot in both my academic and social life. At first, I thought it would be very hard for me to make friends among the high school students but within the first few weeks I was proved wrong. On the first day I arrived Ella, Cole (my homestay sister and brother) and Andy, one of their friends, took me to swim in a lake.

Everyone in the school is friendly and willing to help me with anything. I couldn’t believe that I used to think that the students were all mean. I made many friends through the soccer team, photography club and my classes.

I think the most shocking thing to me is the togetherness of local community and my high school. I grew up in Beijing and I never experienced country life and every family seems like a small part of a bigger family.

I also did community service with my host siblings and friends.

For example, we helped stack wood for our neighbor, and my school even has a fund raising day — every student helped raise money for children in Zimbabwe to go to school. I think the idea of sharing and unity in this community really taught me something.

I think China and the U.S. have two complete different educational systems.

Each system has its own advantages and they both fit their own country. I chose to go to an American high school because I wanted to experience more — I found the U.S. education system to be more attractive to me.

There are a lot of things that I would never have learned and experienced if I went to school in Beijing. My high school in the U.S. offers many more diverse classes compared to schools in China. I could choose any class I like such as drama and film analysis.

Students could even start a new course with a mentor. For example, I was interested in photography and I was able to do it in my high school with a professional photographer. I was also the editor of the school yearbook. I never thought that the knowledge I learned from school could be so diverse.

I felt that I became a real member of the Chapman family. We spent time together and we shared the housework. They treated me as one of their own. I am really thankful that I could have three unforgettable years in Vermont.