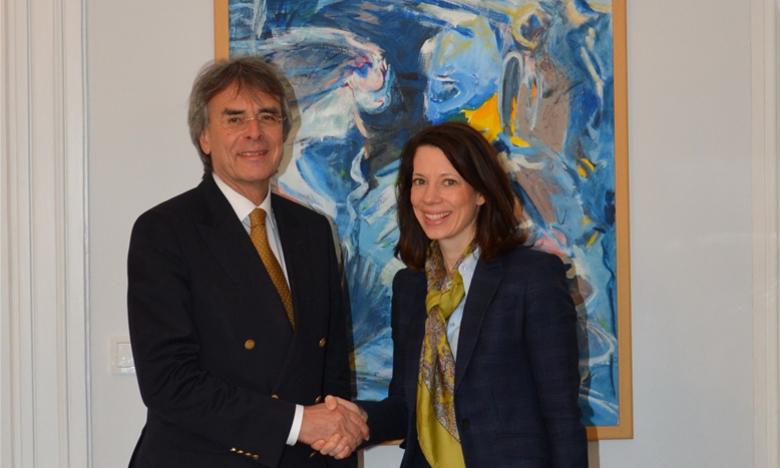 Image from article: Government President Axel Bartelt and Consul General Meghan Gregonis in the Government of the Upper Palatinate Photo: Government of the Upper Palatinate / Stühlinger
REGENSBURG. The Consul General of the United States, Meghan Gregonis, visited Government President Axel Bartelt. The USA is the most important trading partner for Bavaria. In 2017, the Bavarian economy exported goods worth around 21.5 billion euros to the USA. The good economic cooperation should not change in the future. "A sign of a good friendship is that you do not always have to agree, but you can always talk to each other about everything," says Bartelt.
Gregonis underlined the special role of economic cooperation for the transatlantic partnership: "Here the relationship between the US and Germany is particularly intense and stable. 4,700 German or partly German-owned companies in the US employ 670,000 people. We really appreciate this German commitment. The US remains a highly attractive location for German investment, "not least because of the tax reform and the favorable energy prices."
Career international
Consul General:
Meghan Gregonis has been Consul General of the United States of America in Munich since July 2018. Prior to working in Germany, she was deputy director of Public Diplomacy [JB emphasis] at the Office of European and Eurasian Affairs of the Foreign Office, where she led public diplomacy efforts in Western Europe.
Foreign countries:
Among her previous responsibilities in Washington u. a. her work at the National Security Council in the White House, where she led the US government's engagement in Turkish affairs from 2012 to 2013. Her overseas assignment includes Islamabad, where she led the largest Foreign Office media bureau outside the United States.
Match the youth
At a working breakfast in the Upper Palatinate government, the Consul General suggested encouraging closer cooperation between innovators in Bavaria and the United States to deepen transatlantic relations. Another focus is the expansion of the Bavarian-American youth and student exchange. "We want to invest in the next generation, also to bring more innovations on the way," said the Consul General. Axel Bartelt welcomed the idea. "If the creative minds of young people from both countries come together, it will lead to even more mutual understanding and more innovation in Bavaria and the US. We both benefit from it, "said President Axel Bartelt.
Bartelt invited Gregonis in the afternoon for a company visit to the FIT AG in Lupburg (Neumarkt district), in which Mayor Manfred Hauser also participated. The company, which also operates a field office in the US, has opened the world's first factory designed exclusively for additive manufacturing in Lupburg, and is a lighthouse project that is well received far beyond the Upper Palatinate. FIT AG uses 3D printing to develop and produce innovative high-tech components with complex geometries and the like. a. for the automotive industry, for motorsport, for medical technology and aerospace. For example, medical prostheses such as titanium hip joints are also manufactured in the 3D printer in Lupburg, as are ultralight components for helicopter drones.
To dare something new
Company founder Carl Fruth described his recipe for success, how in 25 years he was able to build the company with almost 300 employees: lateral thinking, trusting something new, looking at things from a completely different angle, finding tailor-made, high-quality and fast solutions for customers. Gregonis was impressed by the many different product options.
On the sidelines of the visit, Bartelt and Gregonis also talked about the training areas Grafenwoehr and Hohenfels. Gregonis pointed to the US Army Europe announcement of September 2018 to send another 1,500 soldiers to Bavaria by 2020, in addition to the 15,000 that are already stationed in the Free State today. "Both the US and Germany are firmly committed to Europe and to NATO. At the center are the training facilities in Bavaria, in Grafenwoehr and Hohenfels, which are among the most modern in the world. "
Gregonis announced to come back to the Upper Palatinate. As a cyclist, she has noted the date of the Arber bike marathon. As a farewell, she still raved about the good Bratwurstsemmeln she had lunched in Regensburg in the historic Wurstkuchl: "The Bratwurstsemmel something so delicious."
Original Article