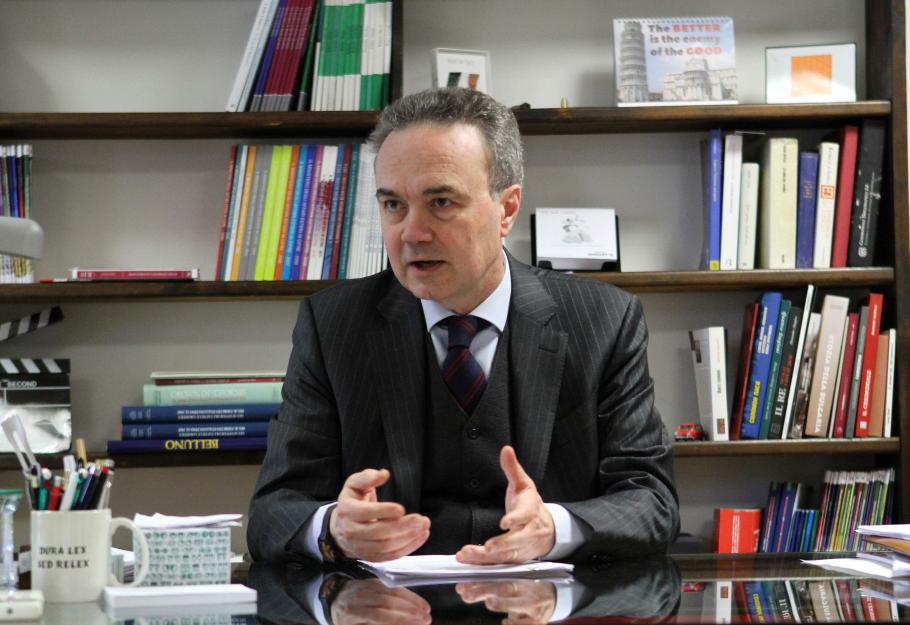 The use of social media in politics becomes a major player in building consensus. The new technologies have deeply affected the working methods of diplomats and their communication style, says H.E. Stefano Baldi, Ambassador of Italy in Bulgaria, in an interview to Europost.

Your Excellency, may I call you Facebook or Twitter Ambassador, as you are quite friendly with modern communications in your work?

I prefer the definition of “cyberdiplomat” that I use since 1997, when I created my first personal website. It was (and it still is) an exciting time for our profession. The new information technologies have deeply affected the working methods of diplomats and their communication style. Today we are using social media (in particular Twitter and Facebook) for our daily activities and to promote our country. It is a quite different scenario from the one I experienced 30 years ago when I started my career. But diplomats are used to change and to adapting to different environments. In one presentation I made few years ago for a TEDx Talk, I explained why diplomats will never disappear: we are an excellent example of a resilient profession! Tools and methods might change, but our final goal of defending national interests with peaceful means remains.

More than in the past, a good diplomat has to be also very proficient in the art of communication, and this implies also a good knowledge of the logic behind social media. Ambassadors have a much higher exposure to the public than in the past and they must learn how to manage this increased visibility. Nevertheless, this increased visibility also implies higher risks of making mistakes or being misunderstood. It is difficult to find the right balance between maintaining the traditional discretion and fulfilling the need to communicate some aspects of our work.

What does digital diplomacy exactly mean and what is its place now in foreign relations?

Digital diplomacy is not the simple transposition of traditional diplomacy into the digital world, but it implies a reconsideration of our daily activities. There is indeed a long list of changes that have occurred. Just think about how easy and cheap videoconferencing is nowadays, allowing for virtual meetings without travelling too often. This naturally does not mean that personal contact disappears. It is still an essential element in some occasions and when particularly difficult decisions need to be taken. Today more than ever, diplomacy acts as a bridge between tradition and innovation. Our ability to make the best use of the opportunities offered by technology is constantly being challenged. Now the new frontier is Artificial Intelligence applied to diplomacy. Certainly not as a substitute, but as an additional tool to make the right choice and to take the best possible decision. Will we be able to win this challenge? I am optimistic, but it takes a lot of work…

Many politicians very often use tweets to express their position, sometimes most emotionally. Is this justified when it comes to some very important issues?

The use of social media in politics has become a major player in building consensus. This has been learned quickly by those involved in politics and that explains major investments in communication. As long as information is free and fair, I think it is an advantage for society. The problem is being able to distinguish what is fair and what is not. The phenomenon of “fake news” is not new: the problem with social media is that it is nowadays much easier to fabricate the “truth” in such a sophisticated way that it seems real. The only countermeasure to this risk is knowledge. If you know how these tools work, it will be more difficult to be tricked. On the contrary, as the American psychologist Abraham Maslow used to say: “If the only tool you have is a hammer, you tend to see every problem as a nail.”

Every social media can be used for a purpose and for its exact opposite. We know that terrorists use social media in many different ways for their cause. Certainly we should make our best to counterbalance their actions. We must be smart and prepared. In 2003, I published with two other colleagues a booklet entitled “Hacktivism, cyber-terrorism and cyberwar: the activities of the uncivil society in cyberspace”, and already then it was clear that the Net was giving new opportunities to what has been defined as the “Axis of evil”. More than 15 years later, this fight is still ongoing and it keeps developing every day. We should never underestimate the potential damage that can be caused in cyberspace. That is why cybersecurity is becoming an important international issue where small and big countries should act together.

If I compare the activity of public diplomacy today with the one of only thirty years ago, I see a huge difference. Everything goes so fast today that we have to communicate quickly and effectively. These two elements do not easily go well together. The number of different tools we have to use is widening and changing constantly. Whereas twenty years ago we had to manage only a website to deliver our public message, today we also have to manage Facebook, Twitter, as well as maybe Instagram or YouTube or LinkedIn or others, depending on which one is more effective at a specific moment in a specific country. On top of that, the logic of communication of each media varies. One common element though is visualisation. Today we have to use photos or videos more frequently and therefore exposure of Ambassadors, for example, has increased exponentially. So a good diplomat must learn how to master many different situations of communication and many different ways of conveying messages. I personally keep learning everyday. It is important also to set priorities, to avoid any waste of the limited resources (including time) that we have at our disposal. For example when I started my mission in Sofia, three years ago, I knew I wanted our Facebook page to grow and to become one of the main instruments for public communication. So, slowly but steadily, we grew from 200 followers in 2016 to the current 12,000, which puts us among the top five Embassies in Sofia. It is quite a result and it was achieved through the full engagement of my team in the Embassy. It would have been impossible to achieve this just by myself!

What about the discrete talks among diplomats and diplomatic notes – do they belong in the past? Will the prestige of the diplomatic profession be lost?

As I previously said, the traditional diplomacy of personal contacts and credibility is still “alive and kicking”. I have been working for most of my professional life in the multilateral world and I have experienced personally the importance of the human factor in negotiations. This is also the reason why the diplomatic career in all countries is particularly well considered. To have a good diplomat you need a good selection and a lot of experience. It is a profession where it is best not to improvise. When I was Director of Training of the Italian Ministry of Foreign Affairs, I tried to explain to my junior colleagues how important it is to learn from our more experienced colleagues. There are things you can learn from books and others that you can learn from experience; that is, if you are open and ready for it. I think there is no reason to doubt the prestige of the diplomatic profession as long as a proper selection is made to ensure that only the best young people represent a country abroad. It is a big responsibility, and it is worth investing energy and resources in foreign policy. They will certainly pay back. If I look at the new generations of Italian junior diplomats (and also of Bulgarian junior diplomats that I have met several times) I must say that I feel reassured for the future!

H.E. Stefano Baldi is the Italian Ambassador in Sofia since September 2016. He is a career diplomat in the Italian Ministry of Foreign Affairs and International Cooperation. He has a long experience in multilateral diplomacy having served at the Permanent Mission of Italy to the United Nations in Geneva and in New York and at the Permanent Mission of Italy to the European Union. He has written more than 20 books and has been a radio speaker and lecturer in several universities. His most recent research focuses on diplomatic management, social media for international affairs, and books written by diplomats. More information is available on his personal webpage: www.stefanobaldi.org