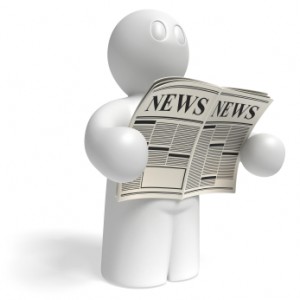 It used to be easy to get the American public to pay attention to presidents. You could get the nation huddled around their radio while catching them up on what was new in D.C..  You could get all three television networks to run your speech in primetime. You could give an interview to one of the weekly news magazines. Easy, right?

Today, we listen to carefully curated Internet radio (Spotify, for the win!). We watch cable. Weekly news magazines barely exist. If a president wants to reach anything close to a critical mass of the nation and update them with what’s new in his life and the world, he and his advisers need to juggle a fractured set of outreach methods. About 13 percent of American adults are on Twitter. Twenty-nine percent of Americans keep up with current affairs by reading newspapers. Only 34 percent of 18-29 year olds watch television news. Thirty nine percent get their news online. If presidents don’t use all of these outlets, they aren’t going to reach the public.

Not only does the White House have to be hyperactive with outreach, they have to balance that strategy with the equally impossible act of appearing “presidential.” Every time Obama has been especially skillful with getting lots of non-political media attention, he’s trailed by a tail of analysis asking whether this is the best use of his time — especially with all that golfing! Presidents haven’t quite figured out that balance yet — and the equation has gotten more and more difficult in recent years.

That’s where we come in. Below we’ve assembled a foolproof guide for politicians on how to win the Internet and influence people.

8. Make it your life’s mission to end up on this Tumblr.

The Internet loves it when famous people hang out together (see the most retweeted photo of all time for more details). We are a busy people, and if celebrities can make our lives easier by making procrastination more efficient — more celebrities, less effort — we will thank them by buying their new fragrance or voting for them.

This is one skill the White House has mastered. They have even managed to somehow to make the awesome people they hang out with align with the policies they are currently hoping to promote.

Like hanging out with scientists to promote STEM education.

Or hanging out with celebrity chefs to promote health eating.

Having people make Tumblrs about you is great too. Most single-subject Tumblrs are devoted to Harry Styles or Channing Tatum and Taylor Swift and Dave Coulier. If you are a politician and manage to inspire that devotion, you should be a little weirded out, but maybe flattered — and then start thinking about how you can use this to your advantage (that’s the type of thinking that got you elected in the first place, isn’t it?). The politician who has best harnessed the power of Tumblr devotion is Hillary Clinton, who submitted her own entry to the Texts with Hillary Clinton Tumblr and even hung out with its creators. People were suddenly calling Clinton “cool” and now everyone thinks she should be president. Who knows what could have happened if Mitt Romney collaborated with the “Mitt Romney Eating Junk Food” Tumblr in 2012?

7. Convince the world you are best friends with Beyonce

This is an obvious rule and requires no additional explanation.

For extra credit, choose Mr. Knowles when asked whether you are on Team Jay-Z or Team Kanye. This will further prove your allegiance to America’s royal family, as well as revealing more about your personality than tweeting out your results for 10 Buzzfeed quizzes ever could.

6. If you have to go on late-night television, make sure that you do something people will watch over and over again on YouTube

Let’s amend the rule: If you’re going to go on late-night television, only go on Jimmy Fallon. Other politicians, like John Boehner, haven’t figured this out yet and are a result having much less fun on Letterman and also unrecognizable to anyone under 40.

This year’s Super Bowl was the most watched television event of all time, a clear sign that talking about and/or playing sports is a great way to get attention as a politician. President Obama has tapped into this vein by doing an interview with Bill Simmons, a sportswriter who currently runs the website Grantland, and playing enough basketball to earn a name as one of the most powerful people in sports. Many successful politicians have had pasts in sports, which they never fail to mention. For presidents though, the favorite way to show your athletic prowess has traditionally been by jogging.

Politicians have played up their other athletic ventures too.

Memes are a great way to win the Internet. Remember Strutting Leo? Everyone loved that! However, until the Supreme Court rules that presidential adoption of memes for their own use is not an example of executive overreach, no president or politician will ever use a meme in a way that does not present a clear and present danger to American society.

The Health and Human Services department has earned the most groans lately for trying too hard to be hip on the Internet by enlisting autumn man and doge in their Affordable Care Act marketing drive. They aren’t alone, though.

Every single time a politician employs Comic Sans font in an ironic manner, it is as if a choir of dancing babies from Ally McBeal started to sing “Friday” off-key. Every time a senator tries to start a hashtag, the Internet will respond by stealing it for its own nefarious purposes. Part of the reason politicians are woefully inept at speaking Internet is who they’ve hired to do their Internet outreach. Twentysomethings who end up in press offices on Capitol Hill may be twentysomethings, but they are also the type of people to end up in a press office on Capitol Hill. That weird brew of earnest cynicism that D.C. manufactures in massive quantities isn’t very conducive to riffing off Keyboard Cat. If D.C. wants to hop on the meme train instead of occupying its own separate viral universe, they should start contracting out PR projects to Reddit commenters.

3. However, you may start a meme if your attempts at rules 5 through 10 work well.

Weird Twitter has many definitions, most of which its participants forcefully quibble with. One website says it “refers to a loosely connected group of Twitter users who are known to experiment with spelling, punctuation and format for humor or poetry. The style of writing can be considered surrealist by participants in the group.” This definition seems to also define much of political Twitter.

Another definition describes Weird Twitter as “the intentionally wrong style of idiotic comedy.” This definition also seems to describe much of political Twitter.

That’s why it seems almost tragic when politicians try to adopt memes already in use instead of sticking to what they know best, being themselves. 2. Continue the legacy of the Ed Koch movie review.

Former New York City mayor Ed Koch, who died in February 2013, kept himself and his city entertained after his tenure ended by writing movie reviews. Now, politicians are often asked to give impromptu movie and television and culture reviews as part of their day job. Over the course of his presidency, Barack Obama has remarked about the merits of Homeland, Anne Hathaway, The Butler, Caddyshack, and many, many other cultural events. He has played Daniel Day-Lewis playing Obama. Michelle Obama announced Best Picture at the Oscars last year. During the 2012 campaign, Mitt Romney spoke about Twilight and South Park. Patrick Leahy one-upped all of them by making a star turn in The Dark Knight.

Michael Pollan’s rules for eating, as laid out in “In Defense of Food,” can be adapted for the use of the politicians using social media. If you can’t follow any of the other rules, at least do this.

By  Jaime Fuller reports on national politics for “The Fix” and Post Politics. She worked previously as an associate editor at the American Prospect, a political magazine based in Washington, D.C.