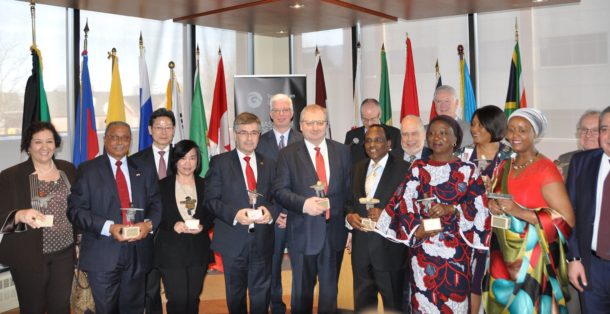 On the occasion of the 2nd Canada’s Ambassador of the Year&Public Diplomacy Awards 2019, the Faculty of Civil and Common Law of the University of Ottawa, in collaboration with the Deanship of the Diplomatic Corps of Canada and the International Public Diplomacy [JB emphasis] Council by Diplomat Magazine, celebrated in March its Awards Ceremony, that was followed by a reception. The Award consisted in a Canadian Inukshuk sculpture, and it was presented by the Deans of the Faculties of Law and the Dean of the Diplomatic Corps. Twelve prizes went to heads of diplomatic missions from twelve geographical regions to 12 award-winning ambassadors. Moreover, four special awards and recognitions were handed to organizations working closely with the foreign missions present in Canada. Special prizes also went to distinguished individuals, including a High Special Diplomatic Recognition to H.E. Constant Horace, Dean of the Diplomatic Corps of Canada and Ambassador of Madagascar to Canada.

The 2019 Awards ceremony also featured the farewell to Ambassador Constant, who will be returning to his country, after serving thirteen years in Canada. Mr. Pierre Thibault, Assistant Dean of the Faculty of Civil Law, offered him a gift on behalf of the faculty.
Original Article