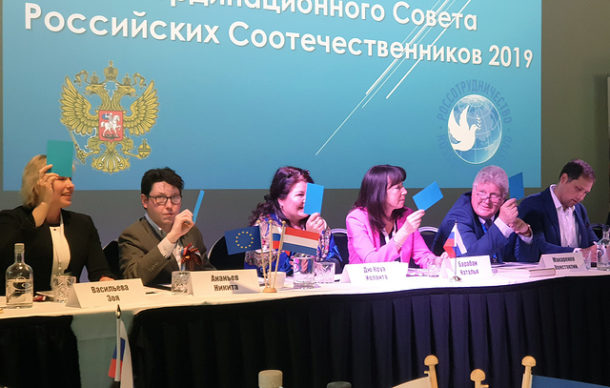 diplomatmagazine.nl
Posted by Editor on Saturday, June 1, 2019 · Leave a Comment

Konstantin Makarenko, the Executive director of the Public Diplomacy [JB emphasis/underlining] Corps (PDC) Foundation named the priority for the current stage: “to change the principles of work”.The Hague, 18th May 2019. TASS Correspondent Vitaly Chugin. A scheduled conference of the Coordination Council of Russian compatriots was held last Saturday in the Hague. The Conference elected a new Bureau and set out the goals and tasks for the near future.When speaking to our TASS correspondent, Mr. Makarenko, the Executive director of the Public Diplomacy Corps (PDC) Foundation, who moderated the meeting, mentioned that the priority for the current stage is: “to change the principles of work”.“Our organization needs a new working style”, said Mr. Makarenko. “In the past our activists reported on their own work results. Now we have built an internet portal which will publish the information on positive experience cases. People must know that such positive experience exists. But our Bureau needs to focus on comprehensive large scale projects. For example, each school can organize a festival. But no school can organize a large scale event where 300-400 students will participate”. As examples of such large scale events Mr. Makarenko named the celebration of the 75th anniversary of the Victory in the Great Patriotic War and the 350-year birthday of Tsar Peter the Great (1672-1725).The freshly elected Bureau consists of 7 members. The Conference has also resolved to return to the old official name “The Coordination Council of Russian Compatriots in the Netherlands” and to offer the new version of the Statutes for public discussion.Consolidation as priorityAt the meeting were also present: Boris Zhilko, Chargé d’affaires of the Russian Federation in the Netherlands, Andrey Lanchikov, the Deputy-Director of the Foreign Ministry Department for Relations with Compatriots living Abroad, Mr. Artyom Chernov from the Rossotrudnichestvo Agency, who is responsible for cooperation programs with compatriots abroad, as well as representatives of the Russian Embassy in the Netherlands.In his speech Mr. Lanchikov passed the greeting from Mr. Oleg Malginov, the Director of his Department and the Secretary of the Governmental Committee for Compatriots living Abroad. This greeting underlines the “current need to consolidate the Russian diaspora, to create an atmosphere of good will and mutual support”. The Russian Foreign Affairs Department expects the renewed Dutch Coordination Council of Compatriots to address a broad spectrum of issues. Such as lessons of Russian for children, the preservation of Russian culture and traditions among compatriots, the development of economic ties with Russia as well as making the diaspora youth aware of historical memory and their Russian roots.Mr. Lanchikov also referred to the last years’ 6th World Congress of Compatriots. “There were many discussions during the Congress. The proposed objectives are quite ambitious. You can use them as guidelines in your work. Do your best to implement them. I really hope that you will continue to build on the constructive cooperation with the Russian Embassy in the Netherlands. Only together we can move forward.”Yury Uraksin, the First Secretary of the Russian Embassy in the Netherlands has invited the newly elected Bureau to cooperate with all stakeholders. “No one should be ever excluded from our activities” underlined Mr. Uraksin. “Inclusivity is THE way to guarantee the best results for the whole coordination committee”. The diplomat has also stressed the need to use the positive experience of the past. He promised all possible help and cooperation on behalf of the Embassy to further consolidate the compatriots in the Netherlands.
Original Article