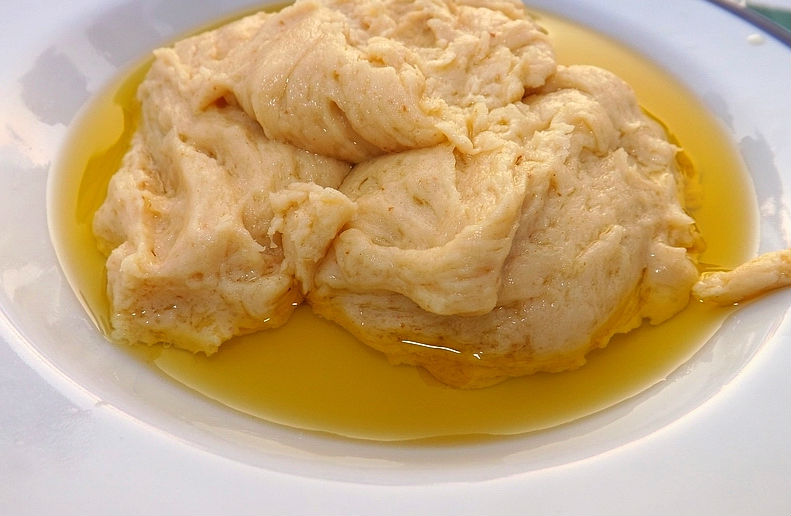 Belmuž is a traditional meal of unique taste, made of simple ingredients, still gladly prepared and consumed in eastern Serbia. Although you will only need young cheese, corn flour and salt to prepare this culinary specialty, belmuž cannot be made by just anyone. The quality of domestic ingredients, (personal) experience and the recipe that is jealously kept for years within the family, are crucial for the taste of the meal which represents the unique heritage of the shepherd community of the eastern Serbia.

Belmuž has been the every day’s meal of Balkan’s shepherds for decades and was mainly prepared in the neighbouring areas of Knjaževac, Svrljig, Kalne, Sokobanja, Zaječar and Niš. Today this specialty is consumed in many Serbian households, but with its specific taste it very often delights foreign tourists who happen to visit some of the restaurants of national cuisine in the Stara Planina region (The Old Mountain), where this meal is most often prepared.

Belmuž tastes even better when served with Serbian brandy (rakija) and other specialities of Serbian cuisine. Nonetheless, be careful about the quantities of this meal. A single portion of belmuž, this highly caloric dish is more than enough for a good appetizer. It is common for belmuž to be prepared by housewives, but from the ancient times it is very well known that this is the men’s meal. It is assumed that this is how it got its name: bel (white) because it is made out of white cheese, and muž – a strong man.

Belmužijada is a traditional event held in village named Svrljig. Besides many other national dishes, dances, concerts of traditional music, handcrafts and traditional sport competitions, visitors can enjoy the finest and most delicious belmuž. The most interesting part of this event surely is the belmuž making competition and only one man can get the title of “The Belmuž Master“.

Young cheese made of cow’s milk, or even better young cheese made of sheep’s milk, which must not be older than two days, corn flour and salt, are the only ingredients required for the preparation of this famous dish. However, simple ingredients do not imply that the preparation of the meal itself is simple. To make a good belmuž constant stirring is mandatory, and that requires great physical strength. That is why men mainly prepare this dish, and the best taste is obtained when prepared in a caldron.

Salt a drained lump of cheese and put it in a cauldron over a fire and constantly stir until it melts down into „foam“. Then get the cauldron off the fire and put it next to the hearth on the heated stones. Add corn flour to the melted cheese and continue to stir with „curak“(wooden spoon) until it is well “baked” and butterfat is released. The dish is best served hot.

This simple shepherd’s meal with a specific way of preparation and unique taste kept its ritual and customary features to this very day. Belmuž is an unavoidable speciality on many feasts such as Midzor Prayer, St. George’s Day and other joyful events, and it has recently been added to the list of intangible cultural heritage of The Republic of Serbia. Today this meal is served both in restaurants and inns throughout Serbia and old culinary masters say that it is best served with buttermilk.

During The St. George’s holidays, one day before St. George’s Day, in the mountain villages of the Vlasotina region, the flowers are picked, wreaths are braided out of them, belmuž is made and lambs are parted from their mother’s breasts. On the day of Premlaz lambs are taken from their mothers because this day is the beginning of the sheep milking season. The preparing of belmuž was obligatory in order to ensure that the sheep would produce more milk during the year. Prepared belmuž is then served on a pasture or at sovra. This is how the shepherd’s day is celebrated – the beginning of the sheep-milking season which lasts until autumn.

If you find yourself in eastern parts of Serbia, be sure to visit some of the many local restaurants in order to experience the taste of real belmuž. Hospitality and kindness of your hosts who will welcome you with smiles on their faces, numerous specialities of traditional Serbian cuisine and diverse cultural and natural riches will ensure an unforgettable experience in the authentic surroundings of Eastern Serbia.

There are many specialities of the Serbian cuisine that are very well-known and accepted in all four corners of the world. Professional chef and food enthusiast Dobrila Radojevic moved to Austria some twelve years ago and has been working as a promoter of Serbian cuisine ever since. She started working as chef in one of Vienna’s restaurants five years ago, and she says that the comments on native Serbian dishes are almost always positive.

“Since I work in an Italian restaurant, I was not successful in persuading the manager to introduce Serbian dishes to our menu. We eat Serbian dishes almost every day at home; my husband and my children simply adore them, and my Austrian friends are always glad to try any meal that I prepare. My favourites are sarma and belmuž“ says Dobrila smiling, adding that nothing please her more than preparing belmuž.

“I was born in the region where belmuž is an everyday meal. The recipe I use is one that my grandmother gave me, and I enjoy preparing it for my loved ones”, says Dobrila. Although the cheese from Stara Planina (Old Mountain) is irreplaceable, Dobrila tries to make the best and most authentic belmuž out of the ingredients that are at hand. „It is very important not to forget where you were born and where you come from. You can carry on with the Serbian tradition anywhere in the world, if there is any will to do so, “concludes Dobrila.