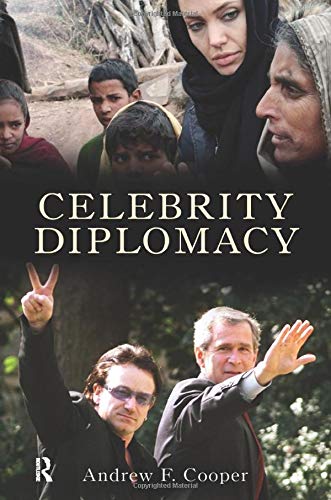 In this book, Andrew Cooper who is a Political Scientist tries to analyses and assesses the role of celebrity into the world of Diplomacy which is changing its course from being state-centric to incorporating transnational and global elements. This book tries to capture the roles played by celebrities like movie stars, musicians, and CEOs who operate across the globe, have grabbed new roles on the world stage, simultaneously levering their access to world leaders and mass audiences by exercising their star power to the world of diplomacy and humanitarian cause, identifying both the benefits and the pitfalls of this thoroughly modern phenomenon. He also talks about how celebrities are constantly under scrutiny and often seen as a frivolous lot around professional diplomats.

The author in the first chapter tries to define what and who comes under the ambit of celebrity diplomat and how they are different from some professional diplomats who also gains the status of celebrity by being under the constant public eye. He highlights how the selection of Bono and Bill and Melinda Gates as Time magazine’s 2005 persons of the year serves as just the most visible measure of how new types of celebrities performing functions of diplomacy and an expanded range of activities are being recognized on the international stage through them.

The current wave of celebrities squarely targets the arenas of global governance, global equity, and global regulatory issues. Efforts to end global poverty, to cancel the debt, to expand pro-grams of official development assistance, and to focus on HIV/AIDS and other pandemic health issues, all of which are heavily concentrated on Africa, would be on the top of most current lists of celebrity activism.

He throughout the book constantly point out the domination of the Anglo-sphere in the world of celebrity diplomacy, giving narrow space to outsiders, thereby keeping them under control.

The authors point out how some celebrities like Audrey Hepburn and Danny Kaye tried to capture elements of the engaged public life while working with UNICEF, but the work of diplomacy took a full-fledged shape only after the end of cold-war with a massive surge of technical innovation and expansion. Various celebrities bring their star power to work for the collective good of humanity and enter into the world of diplomacy. Celebrity diplomats comprise of no longer only of the ambassadors chosen for UN but also various free-floaters, such a late Princess Diana, U2 singer Bono whose advocacy work has had impacts on many governments. Philanthropists like Bill Gates, George Soros are also breaking new grounds not only because of the size of their financial contribution but also because of their personal involvement in global public policy debates. Some celebrities provide ground and field which requires celebrities’ attention like Oprah Winfrey.

He uses U2 singer Bono as an epitome of a celebrity diplomat, who navigated the traditional boundaries between diplomacy and policymaking, working through both the International Forum and the corridor of national political power. He continuously changed his tactics as he continued to evolve. Bob Geldof, another celebrity who the author addressed as an anti-diplomat, had the same effect as Bono in the world of diplomacy though his characteristics were contrary to that of a celebrity diplomat.

UN has also revamped itself to include celebrities who were genuinely interested in working for it. It was after a lot of discussions, interviews, and debate that celebrity Angelina Jolie was selected to work with the UN. UN Secretary-General Kofi Annan encouraged celebrity involvement in the UN. Celebrities carving a niche for themselves by digressing from the path they have been told to tread on like Princess Diana. Most of the book the author is limited to the English-speaking West who dominated the world of diplomacy.

It is only in the final chapters that he devoted his attention to celebrities from Non-West taking the role of diplomacy offering views countering the Eurocentric part of the world order. He states how celebrity diplomacy has expanded and incorporated fragment from all around the world bringing with them different accents, cultures, and opinions. He highlights how Bob Geldof during the Live 8 concert was responsible for his controversial selection process, as he was accused of reproducing a system of “musical apartheid” in his bias toward featuring older white “gods” of rock over African stars in the concerts under his command.1

Thus, the interference of people from the Anglo-sphere dominating and speaking about issues centered around Africa and Africans started hinting at the new parentalism or an expression of benign neocolonialism. There have been a few celebrities from the African continent like great Senegalese musician Youssou N’Dour, Maal but it was only later in the 21st century that various non-west celebrities started entering and bringing their localism with cosmopolitanism in the arena of diplomacy. Various Japanese celebrities like Misako Konno, Tetsuko Kuroyanagi, and so on not only entered into the world of diplomacy but played their own game by being non-conformists. The author further spoke about how the need to have a democratic government is necessary for various non-state actors or various activism to flourish outside the state purview otherwise entertainment or celebrity diplomats are left with no choice but to balance between their loyalty for the government or help in accommodating the government in power. Various celebrities like Imran Khan. Pakistani cricketer, George Weah and others used activism as a means to get hold of political positions and power. Instead of continuing to act as a force of moderation and tolerance, Imran began to pander to a domestic constituency after becoming a candidate in national elections, most notably siding with minority obscurantist voices over unsubstantiated news reports in 2005 regarding.2 This led to considerable damage to his reputation across the globe.

India has also entered into the world of diplomacy through people like Arundhati Roy, Shabana Azmi, and Amitabh Bachchan who have not only offered their fresh perspective but also reciprocated in the fashion and technique similar to North. However, the biggest problem that non-Anglo-sphere celebrities faced was to attract the same level of publicity as their counter-parts from the U.S. /UK hubs. The celebrity diplomats in the North should embrace their south-ern counterpart is the way forward, humanity should be the underlying principle in the diplo-matic world.

Diplomacy is a complex activity with a vast array of actors.

The authors draw our attention to the fact that the celebrities bring an added value to the repertoire of diplomacy and global affairs as they operate beyond intergovernmental processes. Celebrities provide a convenient surrogate for, and a conduit in response to, the traditional bonds that hold society together, performing mobilizing, interpreting, and, most importantly, mediating functions that have been eroded within traditional institutions.“When a celebrity talks, people listen; there is no better messenger.”3 It is thus, important to accept that importance and role of celebrity diplomats, as keeping them away from scrutiny will propel them to become ‘loose canons’ who are not accountable to anyone.

Thus, we need to accept that the sheer scale, intensity, and resilience of celebrities have been successful in imparting both a buzz and a bite. Celebrities are better placed than politicians to convey important messages. We need to bifurcate the celebrities who use diplomacy as career enhancement from the sincerely working ones, and for that, we need to understand that celebrity diplomacy is not a mere fad. They can focus the entire world’s attention on a problem, and they can help build a groundswell of public support for the work that the professionals are doing. Celebrities not only blur but effectively break down the barriers between domestic and international politics. their presence as participants who look, behave, and speak very differently than those actors who traditionally occupy the elevated space on global affairs says much about how these orthodox assumptions are no longer valid.

The only problem with this book is its limitation and biases towards the Global North which the author has accepted himself. Otherwise, it is an interesting read for someone who wants to read about soft power exerted by celebrities in today’s globalized world and its effects on the national and global levels.

The post Celebrity Diplomacy: Are they biting a bigger piece than they can chew? appeared first on Modern Diplomacy.