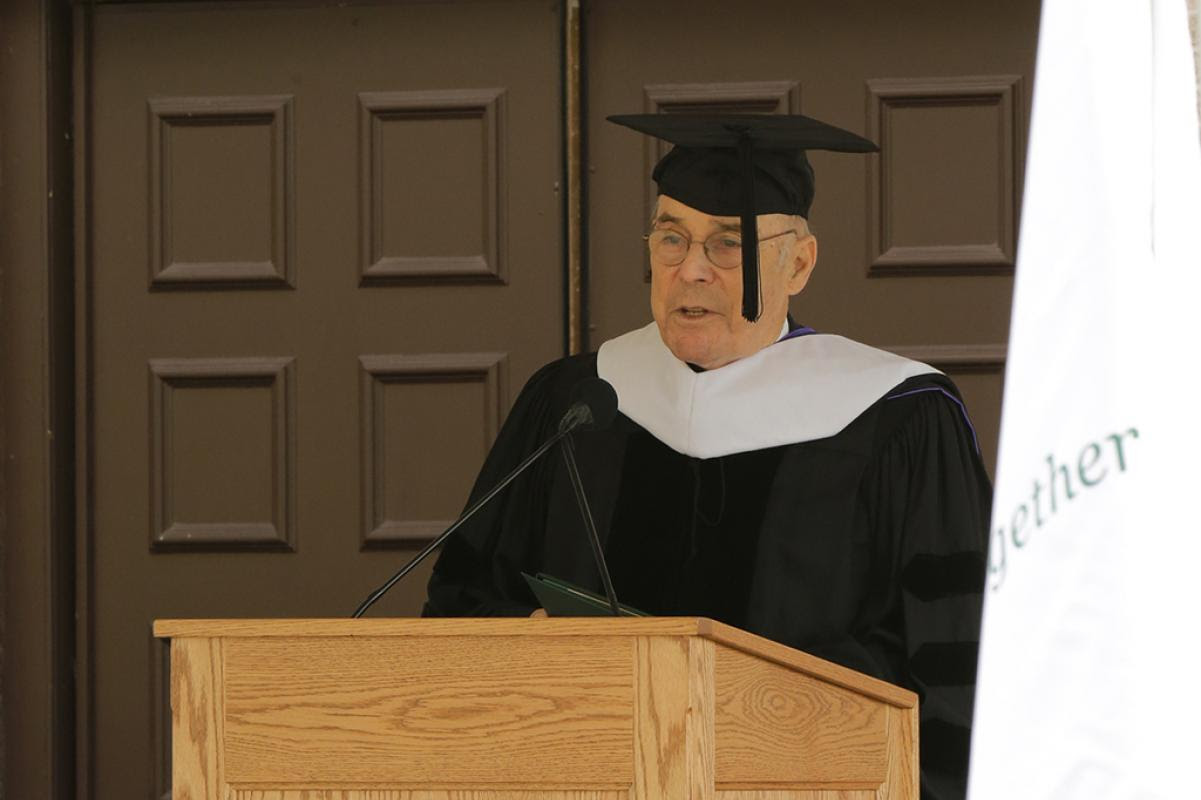 Image from article, with caption: Keuka College Class of 2019 graduates, from left, Jim Truong, Megan Weber, Mary Mullen, McKayla Nolan, and Vanessa Tsarevich celebrate the big day. (Photo: Gretchen Parsells)
With newly minted graduates, a newly installed president, and a sun-filled sky that was, if not new, at least novel in recent weeks, Keuka College’s Class of 2019 whooped, hollered, and crossed the stage during Saturday’s 111th Commencement celebration.
Retired American Ambassador Robert R. Gosende encouraged the approximately 460 graduates to be global thinkers who also work for the greater good at home during his Commencement address.
“The fact that our national leadership has abandoned diplomacy as a tool as we seek our way through today’s difficult world is most certainly unfortunate,” said Mr. Gosende, who served for 36 years in Foreign Service with the U.S. Information Agency and the Department of State before joining the State University of New York in 1998. “Our system is strong but people need to understand how it is supposed to function and how they have to participate.”
Mr. Gosende, whose diplomatic assignments included tours of duty in Libya, Somalia, Poland, South Africa, and the Russian Federation, told graduates they would need to make up for their predecessors’ shortcomings on the global stage.
“I’m embarrassed that my generation is leaving you with so much to do to set our country back on a more civilized course,” he said. “That is certainly not what we intended.”
He focused on four key areas: foreign policy, preventing future instances of genocide, the work of retired Foreign Service Officer William J. Burns, and changes to the U.S. political system proposed by Professor Larry Sabato of the University of Virginia at Charlottesville.
Among the latter: Mandating non-partisan redistricting for House elections, establishing a single six-year term for presidents with the option of an additional two years through a public referendum, and eliminating lifetime tenure for federal judges.
Mr. Gosende also lamented the decline of high school instruction in civics, history, and world geography.
“We unfortunately began to move away from these requirements to focus on STEM: Science, Technology, Engineering, and Math,” he said.“And now we seem to be producing talented people in these fields, but people who do not understand how our system of government issupposed to work. We need to correct this! As Keuka College graduates, you have become uniquely qualified to make those corrections.”
Upon the completion of his address, Mr. Gosende was presented with an honorary Doctor of Humane Letters degree by College President Amy Storey.
Presiding over her first Commencement following her appointment by the Board of Trustees earlier this week, President Storey urged graduates to put the tools they’ve honed on campus to good use.
“I know that you are smarter, stronger, and kinder today than you were when you arrived at Keuka College,” she said. “Use that growth to your advantage. You are in control of your destiny. Use your smarts, your strengths, and your kindness every day to enrich your life and the lives of those around you.”
Also taking place during Commencement ceremonies:
– An Award of Higher Education was presented to Joseph Alessi and Joshua Burnett, two students from the DRIVE (Diversity, Respect, Inclusion, Vision and Experiential Learning) program. D.R.I.V.E. is a collaboration of the Dundee Central School District, the ARC of Yates, and Keuka College in which College students serve as peer mentors to young adults with intellectual disabilities as they assimilate into the College environment and explore their personal goals.
– Jennifer Mealey, associate professor of social work, was named Professor of the Year. Prof. Mealey was praised for her teaching excellence, her engagement in the classroom, and her dedication to Keuka College.
-Catherine Reed, writing specialist and instructor of English, was named Adjunct Instructor of the Year.
-The Keuka College Board of Trustees awarded the status of Professor Emerita to Dr. Kasey Klingensmith, professor of biology, and to Ann Tuttle, chair of the Division of Business and Management and professor of management.
-Registrar Jill Bird was named Staff Member of the Year.
– Spehttps://www.keuka.edu/news/veteran-ambassador-deliver-keuka-college-commencement-addresseeches were delivered by student representatives Mack Ottens ’19 and JoAnn Gillette ’17 M’19.
2.
Veteran ambassador to deliver Keuka College Commencement Address, keuka.edu.
Ambassador Robert R. Gosende, shown speaking at a Sienna College symposium last year, will deliver the 111th Commencement address at Keuka College this spring. (Photo courtesy Sienna College)

Gosende image from article
A veteran diplomat who represented U.S. interests during some of the most heated international crises of the past generation will deliver the keynote address at Keuka College’s 111th Commencement ceremonies on May 18.
Ambassador Robert R. Gosende served for 36 years in Foreign Service with the U.S. Information Agency and the Department of State before joining the State University of New York in 1998. His diplomatic assignments included tours of duty as a Cultural Affairs Officer in Libya, Somalia, and Poland, and as Minister-Counselor for Public Affairs in South Africa and in the Russian Federation.
Ambassador Gosende served as President Clinton’s Special Envoy for Somalia at the height of the security and humanitarian crisis in that country from 1992-93. In 1994, he was Senior Advisor to the Assistant Secretary of State for African Affairs, directing the U.S. Government’s education and public affairs activities in support of the first multi-racial elections held in South Africa in April of that year.
While stationed in Washington, D.C., Ambassador Gosende served as the Associate Director of the Bureau of Educational and Cultural Affairs of the U.S. Information Agency, and as that Agency’s Deputy Director and Director for Sub-Saharan African Affairs.
Ambassador Gosende said he will focus, in his speech, on current political challenges and look to make the case for why we need greater understanding of our country’s role in the world.
“I am an optimist and I believe deeply that our system has built-in means for correction,” he said from his home in Guilderland, N.Y. “Our system will correct itself but it will take some time and, in the meantime, there may well have been some things done that most Americans do not agree with. If that is the case there will have to be ways found to correct the things that the majority of voters think need to be corrected.”
This year’s commencement begins at 10 a.m. on Saturday, May 18, outside the College’s Norton Chapel on the Keuka Park campus.
Original Article

What is the secret of “successful” Public Diplomacy?