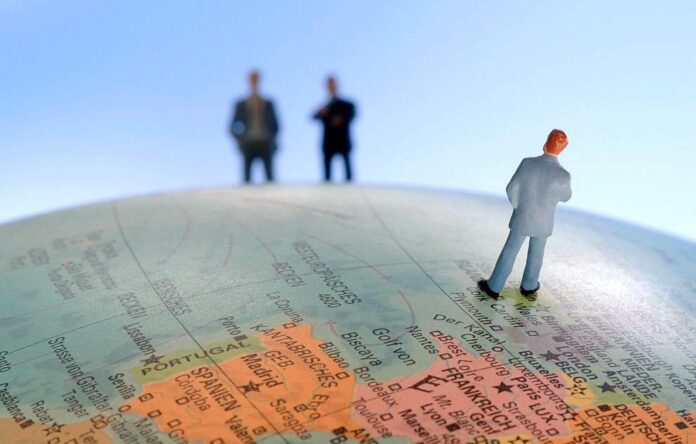 Tom Fletcher, CMG, is principal of Hertford College, Oxford. He is a former U.K. ambassador and 10 Downing Street foreign policy adviser to three prime ministers, and a visiting professor at NYU. He is the author of the bestselling “The Naked Diplomat: Power and Politics in the Digital Age” (2016) and the forthcoming “Ten Survival Skills for a World in Flux” (2022).

As British ambassador to Lebanon, Tom Fletcher was one of the first ambassadors to “go digital.” Ten years on, he reflects on what the first wave of “technodiplomats” got right and wrong, and where digital diplomacy goes next.

Like every industry or craft, diplomacy — a world once dominated by protocol and platitudes, maps and chaps — has already been hugely disrupted by digital technology.

Ten years ago this fall, I was posted as Her Majesty’s envoy to Lebanon. At 36, I was young for the role. The Arab Spring was firing up young people across the region and I wondered if technological change could transform the way statecraft engaged with people. I began experimenting with what we started to call (after a few clunky options like “Twiplomacy”) “digital diplomacy.” A decade on, digital diplomacy has already moved through several phases — three in fact — and stands on the threshold of a fourth. Much has been achieved. But if it is to succeed in putting more streetcraft into statecraft, we must take into account what we did right and wrong.

The first phase was a brave new world. With its 21st-century statecraft program under Secretary of State Hillary Clinton, the U.S. State Department led a period of excitement and optimism about the way that diplomats could use the new tools of communication and connection. For the ambassadors of that era who genuinely adopted and adapted, these were heady times. The rules from capitals were loose: One minister told me that he didn’t care what I tried as long as it stayed out of the U.K. media. Many of us were able to proceed until apprehended. There were plenty of mistakes. And risks: The smartphone I tweeted relentlessly from was also the device that terrorists used to track my movements.

But this was a period when we could surprise people with a desire to connect, engage and show some humility. It seemed possible to imagine that social media would open up societies and promote real agency and freedom. One British ambassador drank so much of the Kool-Aid that he even suggested that the most powerful weapon in the Middle East was the smartphone. I was wrong about that, so far.

The second phase was the institutionalization of digital diplomacy. We started to create structures around the wider dialogue between the old emperors and the new. Worried by the implications for geopolitics of the pace of technological change, I left the U.K. government to try to make the case for the urgency of this effort. After my 2017 report on the United Nations, the U.N. launched an effort for Big Tech and government to talk to rather than past each other. Both the U.N.’s High Level Panel and the Global Tech Panel were genuine and effective attempts to translate between those disrupting global politics, economics and society and those nominally still in charge, an alternative to trying to summon the Zuckerbergs before parliamentary or congressional committees. In “The Naked Diplomat,” I had proposed that countries should appoint “tech ambassadors.” The Danes went for it, with success, challenging the tech companies to engage with states in a veritable dialogue.

Meanwhile, foreign ministries adjusted to social media far more quickly than to any previous technology. Having been one of only four U.K. ambassadors on Twitter in 2011, within a few years all but four were, with some like John Casson in Egypt amassing over one million followers. For a profession without many ways to assess impact, there was real willingness to experiment with social media. I spoke at over 20 conferences of ambassadors, urging colleagues to give it a try, show the human behind the handle and engage (rather than transmit). I used to tell them it was like the largest diplomatic reception they could imagine: Don’t stand at the margins, say nothing or bellow across the room. Yes, there were risks. But the biggest risks were not to be in the conversation.

As more adopted this approach, foreign ministries faced new trade-offs over agility versus confidentiality of their communication. My 2016 review of the Foreign Office recommended a pivot toward the former: Perhaps Sir Kim Darroch, the outstanding U.K. ambassador driven out by former President Trump over his leaked cables, might subsequently have disagreed. But we are now reliant on that ability to communicate at speed.

Diplomacy over the last two years would have been unimaginable without Zoom and WhatsApp. For a profession that used to do everything to minimize direct contacts between leaders, diplomats were quick to embrace videoconferencing once the tech made it a serious option. The pandemic drove summits and conferences online, saving enormous amounts of carbon with little obvious negative impact on the outcomes.

The third phase overlapped with the second: the empire struck back. Authoritarian governments found new ways to use digital technology to suppress freedom. Trump exploited Twitter to fire up xenophobia, prejudice and insurrection. More creatively he also used it — as at home — to court potential allies and to pressure diplomatic opponents. Meanwhile, Russia’s Vladimir Putin weaponized the internet against democracy and built troll factories. Twitter mobs made it harder to share the nuance of complex diplomatic positions, let alone use social media to reach compromise and common ground. Polarization was clickbait and the center did not hold. Governments realized that cyber was the new battleground and started to think in terms of defense.

Meanwhile, Big Tech grew, morphing in some cases into entities more powerful and sometimes more reactionary than governments. Mischievously I had wondered aloud in 2013 whether we should ask Google to be on the U.N. Security Council. Google might now ask why it should bother. While Big Tech grew and flexed its muscles, it quietly recruited the talent, depriving governments of human capital as well as taxes. Symbolically, and perhaps inevitably, the (excellent) first Danish tech ambassador was poached by Microsoft and Britain’s Liberal Democrat leader was poached by Facebook. As the legal arms race intensified, the EU’s titanic clashes with Big Tech over data or incitement were a long way from the idealism of the brave new world phase, when we genuinely believed that we could solve more problems together.

Where does this leave us today? I am now more of a realist about technology and diplomacy, but I remain an optimistic one. We can still crack challenges together, including the Sustainable Development Goals. But to do so, governments must be more honest about what they can’t do alone. Tech needs more patience to stick with slower moving and often clumsy states, and more honesty about where it has become part of the problem.

Meanwhile, diplomats can continue to use technology to make them more effective: My research group at New York University worked on wearable technology to help a diplomat read a room; a Diplopedia to do a better job of conserving diplomatic records; and intelligent and transparent use of sentiment mining to better understand public opinion. I stand by the hypothesis that the more oversight the public has of issues of war, the more peaceful government policy will be. Perhaps one of the most exciting areas for diplomacy will be the potential to combine it with the latest advances in collective psychology and social media to make peace between societies rather than between states, and between nations and their histories.

The next phase of digital diplomacy should also see work on the next great peace processes: with the planet, with Big Tech, between young and old, between hosts and migrant communities, and ultimately maybe with technology itself. I think digital diplomacy can help us deliver better outcomes on each of those.

Finally, this next phase of digital diplomacy will see diplomats returning to the basics of the craft. We’ll need a more focused effort to develop citizen diplomats, equipped with vital diplomatic skills like empathy and emotional intelligence: Education is therefore upstream diplomacy. As I’ve proposed elsewhere, we’ll need an old school pen and paper effort to rewrite the global rules for protection of our freedoms in an online world. We’ll need embassies to escape from the confines of buildings and return to their original mission as groups of people sent to connect. And we’ll need diplomats who can still do what Edward Murrow called the “last three feet,” that crucial human connection that will be the last diplomatic skill to be automated.

That is an exciting and urgent agenda. If diplomacy did not exist we would need to invent it. But now we need to reinvent it. And that is too important to leave to diplomats.