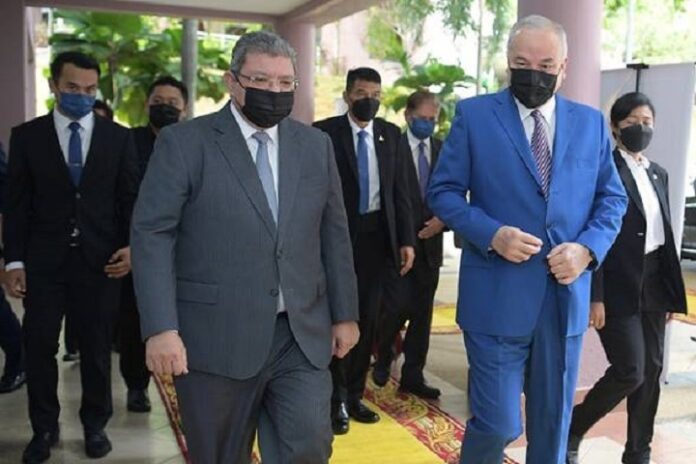 While it is important to embrace digital diplomacy in the post pandemic period, Malaysian Foreign Minister Datuk Saifuddin Abdullah reminded the diplomatic community to continue their tradition of engaging in face-to-face interaction.

He also said they should also establish greater networking with their respective stakeholders which will greatly help them to shine at the international stage.

While diplomacy in the post pandemic world has become a different ball-game altogether, where physical presence is no longer a selling factor, this is quite a challenge as the cornerstone of diplomacy is building rapport and networking.

“There are many instances, I believe even in the post pandemic period, people may think it saves time, energy and resources by meeting virtually, but there are meetings you just cannot substitute with video conferencing. You need to meet up especially when comes to crisis and conflict resolution.

“You can’t beat nudging each other over the dinner table, some diplomats going to the green to play golf or going movies together. You cannot beat those close relations. That rapport need to be built overtime which requires face to face communication,” he told reporters after attending the royal address by Sultan Nazrin Shah of Perak entitled “Shaping A New Generation of Diplomats” at the Institute of Diplomacy and Foreign Relations (IDFR) 30th-anniversary celebration, here, today.

Saifuddin said this referring the call made by Sultan Nazrin, who is the royal patron of IDFR, at the ceremony that digital diplomacy will not be able to replace face to face meeting.

Sultan Nazrin in his address said as a communicator, diplomats were encouraged to embrace digital diplomacy to complement traditional face-to-face diplomacy as it could greatly assist in projecting a state’s foreign policy position to domestic and foreign audiences.

Saifuddin said that the royal address by Sultan Nazrin today will be made as a reference text for his ministry staff and for students undertaking diplomacy-related courses at IDFR, the training arm of Ministry of Foreign Affairs.

On the initiatives undertaken by the ministry in ensuring diplomats are experts in their respective fields, the minister said the ministry through IDFR has been constantly training the diplomatic community to be good communicators on their subject matter and ways to handle the media.

“Wisma Putra is also strengthening the Information and Communications Technology capacity by improving its auditorium and studios as many video conferencing are taking place on a daily basis at the ministry lately” he added.

Saifuddin also congratulated IDFR for its 30th anniversary of establishment, saying that 12 of the ministry’s top diplomats have served as its director generals so far.

“I would also like to take a minute to appreciate the first Director General of IDFR, Datuk Albert S. Talalla, who is here with us today. In 1991, Datuk Albert Talalla, fresh from his stint as Ambassador to the United States, was tasked to establish this institute. The rest, as they say, is history,” he said.

In his speech, the minister said that on Nov 3, the Cabinet had approved the “Focus in Continuity: A Framework for Malaysia’s Foreign Policy in a Post-Pandemic World” where this framework is a manifestation of the government’s efforts to address, among others, the immediate challenges caused by the COVID-19 pandemic.

“It is not a realignment from the established tenets of Malaysia’s foreign policy or its national interests. Neither does it mark a radical departure in Malaysia’s diplomatic and outreach strategies to the world.

Our fundamentals remain the same, as we strategise towards new approaches and areas,” he said. The event today was mainly attended by Wisma Putra’s top officials and foreign diplomats.