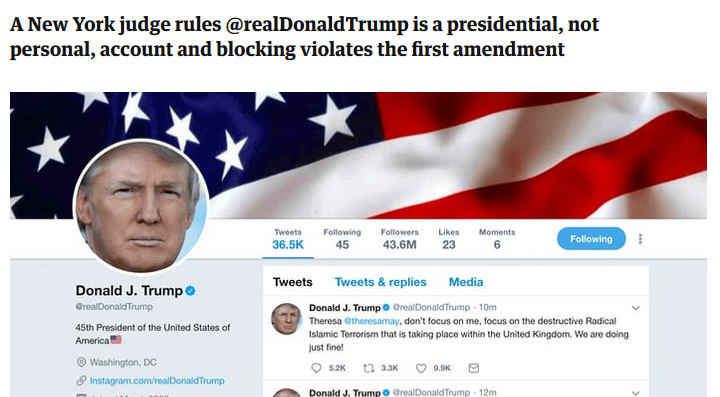 A district court in New York has ruled that Donald Trump cannot block people on Twitter, because it violates their first amendment rights to participate in a “public forum”.

The case was brought forward by the Knight First Amendment Institute at Columbia University, representing seven plaintiffs who have been blocked by the president.

In ruling against Trump, the court pointed to past White House assurances that the president’s Twitter account is an official political channel. In her 75-page opinion, the United States district judge Naomi Reice Buchwald wrote: “The president presents the @realDonaldTrump account as being a presidential account as opposed to a personal account and, more importantly, uses the account to take actions that can be taken only by the president as president.”

Earlier this week Trump attempted to order a DoJ investigation into election surveillance with a tweet that began “I hereby demand”.

Judge Buchwald suggested that Trump could have simply ignored the replies that upset him, rather than blocking the users involved.

The journalist Rebecca Buckwalter-Poza, who was one of the plaintiffs in the case, has been tweeting about her victory

The judge issued what is known as declaratory relief, which states the point of law, as opposed to an injunction that would seek to bar the president from blocking his critics.

That dodged a potential showdown between branches of government.

“Because no government official is above the law and because all government officials are presumed to follow the law once the judiciary has said what the law is, we must assume that the president and [digital director Dan] Scavino will remedy the blocking we have held to be unconstitutional,” the judge wrote.

Dan Ozzi is an author and music journalist who was blocked by Trump in 2014, after he joked that it would be funny to use his face as a toilet.

“When the account serves as the official mouthpiece of a democratically elected national leader, then I as a citizen have a right to read whatever diarrhea is pouring out of said mouthpiece,” he told the Guardian.

He added that not being privy to Trump’s tweets has sometimes left him baffled.

“I’ve missed a lot of national news updates because I’m blocked. Sometimes I will see dozens of people RTing an unavailable tweet and saying, ‘This is the most disgusting thing I’ve ever read.’ And I’m like, ‘Ah jeez I wonder what that’s all about.’ The guy literally provokes international leaders with his Twitter account and I’m out of the loop on it.”