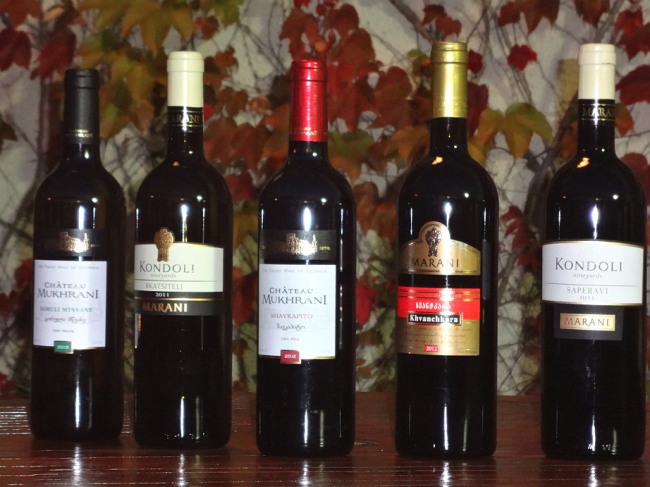 Wine goes hand in glove in the popular imagination of diplomatic work but, for the Georgian envoy, it is also a down-to-earth policy objective of his posting in South Korea.

“(Promoting Georgian wine) is maybe even more of a cultural issue than simply an economic endeavor for the embassy,” he said in an interview with The Korea Herald during Tuesday’s wine tasting event in Seoul, adding that wine was fundamental to Georgia’s national identity.

The country’s name derives from a Greek word meaning “tiller of the land.” It was likely a description applied to the peoples inhabiting the territory between the Black and Caspian Seas by Bronze-age Greek and Phoenician traders who prized Georgian wine.

As recently as November last year, Georgian wines ― and Qvevri wine-making specifically ― were classified as UNESCO intangible cultural heritage. Qvevri wine takes its name from the distinctive egg-shaped earthenware vessels in which the drink is fermented and stored in villages and towns throughout the country. It is widely recognized as a unique and ancient tradition.

“When the embassy opened two years ago, there was not a single place here offering Georgian wine. Now we have six or seven,” Apkhazava said.

He explained how wine from Georgia was just beginning to make its mark now that a South Korean importer and distributor, I & J Partners, began bringing Georgian wines here.

I & J Partners, a private firm, started imports in 2013. Roughly 20,000 bottles have been imported to South Korea so far, distributed to department stores, hotels, restaurants and bars. Several places carry Georgian wines now, including Lotte Department Store, Zelen’s two restaurants (one in Itaewon and the other in Hannam-dong), the Mercure Seoul Ambassador hotel in Gangnam and Seoul Club.

“Korea is new to drinking wine, and it will take time. The good news is that people seem to like to try new drinks and interest grows rapidly,” he said, adding the number would grow in the next few years.

“We opened the embassy in Tokyo a few years ago. We started in the same way, but Georgian wine there has become very popular,” Apkhazava said. In 2007 and 2008 Japan and Georgia opened embassies in each other’s capitals.

Georgia, a small country strategically located at the crossroads of Europe and Asia, and between the energy-rich Caspian and Black seas, has been working hard to expand its diplomatic reach in East Asia and upgrade its bilateral ties with countries such as Japan and Korea.

Traditional Georgian grape varietals are still little known in the West, but they are gaining recognition as international awareness of wines from Eastern Europe, and parts of the former Soviet Union like Moldova, come into their own.

A large swath of the foreign diplomatic community was represented at Tuesday’s tasting with over two dozen ambassadors sipping, swishing and swirling the five Georgian quaffs on offer.

The ambassador said he was confident about the profile of Georgian wine growing as interest in wine drinking here continues to grow.

One wine showcased at the tasting was Chateau Mukhrani, a dry Mtsvane white, from Georgia’s foremost wine-growing region of Kakheti in the eastern corner of the country bordering Azerbaijan. Another dry white was Marani Kondoli.

One of the reds, a Khvanchkara, had a dry powdery texture with spicy notes of black pepper. It punches above its weight in terms of value, priced at about $19 a bottle online.

The Khvanchkara is a naturally semisweet red wine made from the Alexandria & Mudzhuretuli grape varietals and cultivated in Racha, Western Georgia. Tuesday night’s bottles had a strong, distinctive bouquet and a well-balanced tannin profile with flavors of raspberry.

The wine had a dark ruby color. Khvanchkara wine is reportedly one of the most popular Georgian semisweet wines. Another semsweet red, Marani Kindzmarauli from Georgia’s eastern Kakheti region, exhibited a bright cherry coloration.

Although Georgian wines only became available commercially the general public recently, the expectation is that Georgian wines will garner a higher profile in South Korea soon, according to Mina Choi, editor-in-chief of Wine Review Magazine.

Georgian wine has experienced its fair share of ups and downs. In 1985, wine production was 881,000 tons. Many old Georgian vineyards were cut off at the peak of their production, during Mikhail Gorbachev’s antialcohol campaign in the 1980s.

Added to that, the collapse of the Soviet Union and conflicts with the Russian Federation in the 2000s brought the Georgian industry to its knees. It took more than a decade for Georgian viticulture to recover.

With an interest in Georgian wine growing, the number of Korean visitors to the country is gradually increasing. Fewer than 2,000 Koreans visited before the chancery opened, Apkhazava said. About 4,200 travelers visited in 2013.