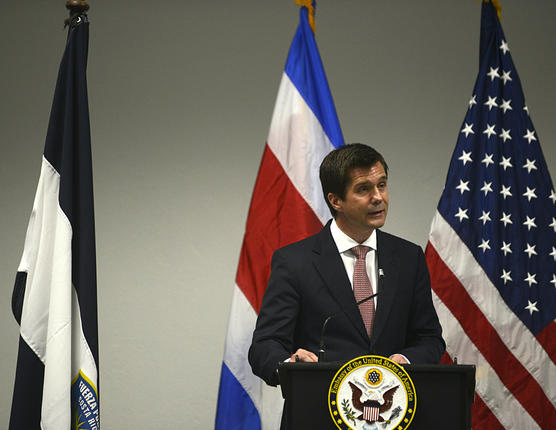 Eric Nelson, a member of the Senior Foreign Service with the rank of Counselor, was appointed as Director of the Bureau of Information Resource Management’s Office of eDiplomacy on September 16, 2013. As Director, he is responsible for the Department’s Knowledge Management strategy, promoting a culture of innovation and collaboration aimed at strengthening the Department’s leadership of the foreign policy process at home and abroad.

Mr. Nelson has served in various leadership positions within the State Department, including Deputy Chief of Mission and Consul General. Since joining the Foreign Service in 1990, he has served overseas in San Jose, Islamabad, Munich, Milan, Mexico City, Frankfurt, and Santo Domingo. Domestically, he has held two assignments in Washington in the Bureau of Administration. During his career tenure, he received numerous awards for effective leadership, including honorable mention in the Department’s Innovation in the Use of Technology Award, as well as the prestigious Superior Honor Award and the Meritorious Honor Award.

Eric began his career in public service as a Peace Corps Volunteer in Liberia.

He holds a Bachelor of Science degree in Chemical Engineering from Rice University and a Master of Business Administration degree from the University of Texas at Austin.