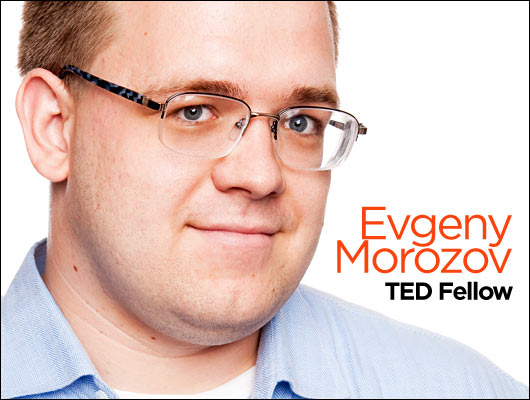 From Wikipedia, the free encyclopedia
For the Russian footballer, see Yevgeny Morozov.

Evgeny Morozov (Russian: Евгений Морозов) is a writer and researcher of Belarusian origin who studies political and social implications of technology. He is currently a senior editor at The New Republic.

Morozov was born in 1984 in Soligorsk, Belarus.[1] He attended the American University in Bulgaria[2] and later lived in Berlin before moving to the United States.

Morozov has been a visiting scholar at Stanford University,[3] a fellow at the New America Foundation, and a contributing editor of and blogger for Foreign Policy magazine, for which he wrote the blog Net Effect. He has previously been a Yahoo! fellow at Georgetown University‘s Walsh School of Foreign Service, a fellow at the Open Society Institute, director of new media at the NGO Transitions Online, and a columnist for the Russian newspaper Akzia. In 2009 he was chosen as a TED fellow where he spoke about how the Web influences civic engagement and regime stability in authoritarian, closed societies or in countries “in transition.”[4]

Morozov expresses skepticism about the popular view that the Internet is helping to democratize authoritarian regimes, arguing that it could also be a powerful tool for engaging in mass surveillance, political repression, and spreading nationalist and extremist propaganda. He has also criticized what he calls “The Internet Freedom Agenda” of the US government, finding it naive and even counterproductive to the very goal of promoting democracy through the Web.[8]

The Net Delusion: The Dark Side of Internet Freedom

In January 2011, Morozov published his first book The Net Delusion: The Dark Side of Internet Freedom (ISBN 978-1586488741). In addition to exploring the impact of the Internet on authoritarian states, the book investigates the intellectual sources of the growing excitement about the liberating potential of the Internet and links it to the triumphalism that followed the end of the Cold War.[9] Morozov also argues against the ideas of what he calls cyber-utopianism (the inability to see the Internet’s ‘darker’ side, that is, the capabilities for information control and manipulation of new media space) and Internet-centrism (the growing propensity to view all political and social change through the prism of the Internet).[10]

To Save Everything, Click Here: The Folly of Technological Solutionism

In March 2013, Morozov published a second book, To Save Everything, Click Here (ISBN 1610391381). Morozov’s critique of “technology solutionism,” the idea that, as Tim Wu put it, “a little magic dust can fix any problem” is timely and potentially valuable. But Wu, whose own work is severely critiqued by Morozov in To Save Everything,[11] goes on to dismiss Morozov’s book as “rife with such bullying and unfair attacks that seem mainly designed to build Morozov’s particular brand of trollism” and “a missed opportunity” to actually discuss the issue.[12] Morozov believes that technology should be debated alongside debates about politics, economics, history, and culture.[13]

About Internet libertarians, Morozov told the New Yorker: “They want to be ‘open,’ they want to be ‘disruptive,’ they want to ‘innovate.’ “The open agenda is, in many ways, the opposite of equality and justice. They think anything that helps you to bypass institutions is, by default, empowering or liberating. You might not be able to pay for health care or your insurance, but if you have an app on your phone that alerts you to the fact that you need to exercise more, or you aren’t eating healthily enough, they think they are solving the problem.”[14]