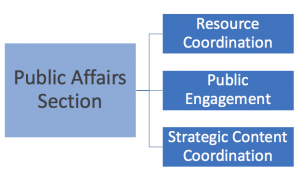 Last week offered two glimpses of U.S. public diplomacy’s [JB emphasis] gradual evolution.The State Department received confirmation that a merger between two of its three public diplomacy bureaus will move ahead. International Information Programs and the Public Affairs bureau will become the Bureau of Global Public Affairs.A less visible but deeper change went public Thursday, courtesy of the Advisory Commission on Public Diplomacy. The congressionally mandated body called leaders from the Office of the Under Secretary for Public Diplomacy and Public Affairs to discuss the “modernization of public diplomacy.”Chairman Sim Farar, Commissioner Anne Terman Wedner and about 100 audience members heard four staffers from the office – called “Ripper” after its acronym R/PPR — describe three initiatives that may be transformational in nature for the 185 public diplomacy offices around the globe.

Boring? For some, perhaps, but not for those who know how public diplomacy works today.

New categories for public diplomacy locally-engaged staffers’ job descriptions.A new set of job titles for locally engaged staff focuses on audiences and resources. Skills in research, management and evaluation will be stressed over the “how to” skills of press relations, TV production, or the knowledge of our myriad exchanges programs. R/PPR’s four-part Strategic Framework doctrine mirrors the standard process taught at schools of public relations.Panelists described some of the specific efforts underway.

Robert Kelley of American University asked how such important changes could possibly go forward without a confirmed Under Secretary for Public Diplomacy and Public Affairs. Operational control of the overseas posts lies with the regional bureaus, overseen by the Under Secretary for Political Affairs. The ranking State panelist, Brian Heath, answered that there is a designated “senior R official,” Assistant Secretary for Public Affairs Michelle Guida. He added that the modernization initiatives are moving forward.That’s probably because PD professionals throughout the Department have been developing some of these ideas for ten years or more. The initiatives are non-partisan, the costs are comparatively modest, and they promise results that Congress and successive administrations have always called for: better data on what the taxpayers get for their dollar.Below the surface, though, the R/PPR initiatives and the bureaus’ merger all face uncertainties.

The revolution in global communications makes it easy to justify changes to organization and process. And they are needed. The tricky part is to take the right steps and remain on course over time.

JBJohnsonJoe B. Johnson consults on government communication and technology after a career in the United States Foreign Service. He is an instructor for the National Foreign Affairs Training Center, where he teaches strategic planning for public diplomacy. Read MoreOriginal Article