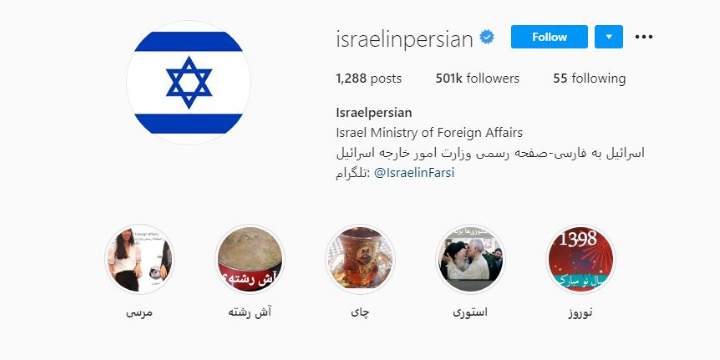 Speaking on outreach to Iranians, Avginsaz said that the most important site was Instagram, which was the only major platform not banned by the Tehran regime. The MFA’s Persian-language Instagram page currently has 500,000 followers.

The channel, she said, was intended “to create a dialogue,” and the coronavirus pandemic and economic upheaval in Iran had led to much stronger Iranian engagement with the channel.

“They are writing to get information,” she said. “They see in Israel a source for credible information, even about corona.”

There are also “people who simply want to get out of Iran, people who are being persecuted for their political opinions,” Avginsaz added.

The majority of these followers are “opposed to the regime,” she said, “so as a byproduct of that, most of the responses we see to our posts, not all but most, are positive.”

Gonen noted that, because most Arab countries had no relations with Israel, “without social media, we couldn’t do things like this.”

Users were particularly interested, he said, in information about technology and Israeli culture and society.

Gonen also saw a sea change in Arab attitudes toward Israel online, saying, “If we see the comments from people today in the Arab world, Israel is no longer the big problem. We are happy to see very positive responses. We hope we are planting the seeds for the future.”

Regarding interaction with users, Avginsaz said, “We can’t get to all the posts, but certainly most of the people who are writing us will get an answer. Some of them, that answer will not end there, but there will actually be more back and forth.”

Gonen added, “We are trying to reply both to the positive comments and to the negative comments. People are very happy to see that we are answering their questions.”