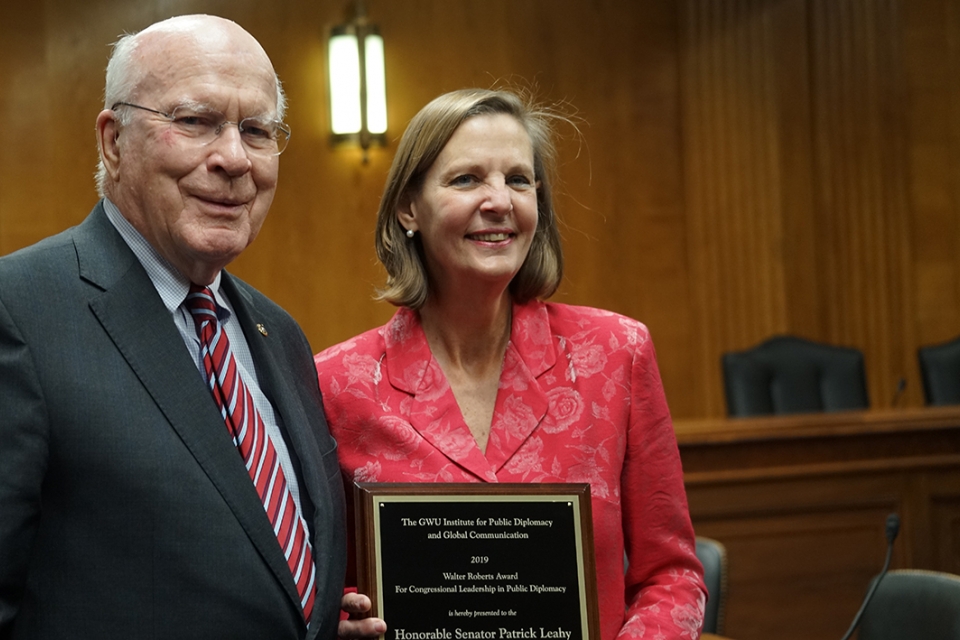 Image from article: Janet Steele (right) presents Sen. Patrick Leahy (D-Vt.) with the Walter Roberts Award for Congressional Leadership in Public Diplomacy. (Photo: Colette Kent)The George Washington University Institute for Public Diplomacy and Global Communication recently awarded U.S. Sen. Patrick Leahy (D-Vt.) the Walter Roberts Award for Congressional Leadership in Public Diplomacy.The institute also announced a grant from the Walter Roberts Endowment to the Vermont Council on World Affairs to enhance international youth leadership exchanges.Mr. Leahy said he was grateful for the honor and thankful for the work GW and the Vermont Council on World Affairs were doing to promote awareness and understanding of the world. Vermonters understand their future is inextricably linked to the wider world, he said. “One of the most important lessons I have learned in the Senate is that when it comes to advancing U.S. interests abroad, there is no substitute for direct interaction between the American people and people in other countries,” he said at the March 5 event at the Dirksen Senate Office Building. “Public diplomacy programs—whether through social media programs or through academic, professional and cultural exchanges—are among our best investments.”Mr. Leahy was elected to the Senate in 1974 at age 34, making him the youngest senator ever to be elected from Vermont. He currently serves as the vice chair of the Senate Appropriations Committee and the senior-most member of the Senate Judiciary and Agriculture committees. He is also the ranking member of the Appropriations Subcommittee on the State Department, Foreign Operations and Related Programs.“The Institute for Public Diplomacy and Global Communication created this award for congressional leadership in public diplomacy because we wanted to highlight something that for many Americans is invisible,” said Janet Steele, IPDGC director. “As vice chair of the Senate Appropriations Committee, Sen. Leahy has been a consistent supporter of U.S. public diplomacy, through his active participation, advocacy and legislative support for telling America's story to the world.”Marie Royce, assistant secretary of state for educational and cultural affairs; John Lansing, CEO of United States Agency for Global Media; Frank Sesno, director of GW’s School of Media and Public Affairs; and Patricia Preston, executive director of the Vermont Council on World Affairs also spoke at the event about the importance of American public diplomacy.
Original Article