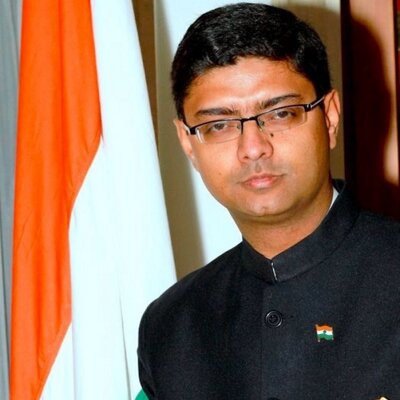 Deputy Secretary #digital diplomacy, as the nameplate reads, is a post held by Dr Sumit Seth, an officer of the Indian Foreign Service.

New Delhi:  An otherwise innocuous nameplate, spotted on the door of a senior official of the ministry of external affairs, has caused much chatter and some mirth in the Twitter universe.

Deputy Secretary #digital diplomacy, as the nameplate reads, is a post held by Dr Sumit Seth, an officer of the Indian Foreign Service.

When one twitter user observed, “Never dreamt would c a # on official nameplate in a GOI office # (sic),” ministry spokesperson Syed Akbaruddin sportingly replied, “We always move with the times”.

The Twitterati gave a firm thumbs up to the initiative; several of them chimed in with encouraging messages like “Love the board outside”, “Well begun is half done” and , “Times they are a changing”.

There were others who picked holes: “The English words aren’t aligned properly”, “Should’ve been #digitaldiplomacy without the space” and “would be nice if they also advocate digital democracy”.

When asked if the hashtag post will soon have its own Twitter handle, Mr Akbaruddin said for now, the twitter handle of # Indian Diplomacy would serve just fine.

This is not the first time the ministry is trying to “move with the times”. Last year, it had become the first Indian ministry to launch a smartphone app that helped users access information on passport norms, foreign policy initiatives and Indian consulates, among others.
For NDTV Updates,